Professor Mohsen Sharifpur, an Associate Professor of Mechanical and Aeronautical Engineering at the University of Pretoria, has developed a new scientific theory that may hold the key to understanding the secrets of the early universe – as well as a perspective of the future of our universe.

Prof Sharifpur is one of Africa’s leading research experts in fluid dynamics in convective nanofluids (a new engineering-made fluid that includes nanometer-size particles to enhance heat transfer), but decided to branch off and study further to gain knowledge in cosmology, nature and constructal law.

One of the questions he’s been tackling is about the origins of the Dark Energy that causes galaxies to accelerate. He believes none of the existing theories have been able to answer this question adequately. “In general, cosmologists often use words like Black or Dark – as in Dark Energy, Dark Matter, Black Hole – whenever they cannot explain the purposes or origins of certain concepts adequately.”

His theory, which he calls the “Source and Sink Theory”, comes from his own desire to find answers to unanswered questions. Was the Big Bang part of nature, and if so, is there any pattern to it? What was the universe like before the Big Bang? What is the possible origin of the energy that caused the Big Bang? What is the reason for the expansion of the universe? Prof Sharifpur believes that in applying a multidisciplinary research approach, his theory has a possible answer to all these questions.

“Based on my studies, in nature, everything occurs in binary or opposite pairs, such as male and female, electron and positrons, bipolar magnetic poles, and we have matter and anti-matter. If there is a hot object, the heat will transfer to a cooler object by natural convection. This is a universal pattern, which helps us to propose a new theory for the very early universe. So, if we follow these patterns present in nature, and if we did have a Big Bang, we need to ask ourselves what’s the possibility of the opposite partner – or pair – for it.

“In nature, everything follows a pattern, like a kind of fluid flow pattern in fluid mechanics. The same is true for the theoretical bases of fluid dynamics, constructal law and patterns in nature like the Fibonacci sequence and fractal geometry, but what we know of these fields separately is not enough to answer some of the most pressing questions of the universe.”

For Prof Sharifpur, the answers to these questions may stem from a universal law in his home discipline of fluid dynamics. He names his new general theory, which has applications in cosmology, after the “Source and Sink Theory” that posits that if there is a source (of energy, like the Big Bang), there must be at least one sink (to receive energy from source) with a flow-like pattern from source to the sink – and the energy in this process must be conserved. In general, sources and sinks are a part of the science of fluid mechanics as well as electronics. To apply this theory to cosmology, a source could emit energy and/or material, and a sink could receive energy and/or material by its gravity (curvature of spacetime). Consequently, Prof Sharifpur believes the energy which created our universe (the Big Bang) must have been a pulse of a point source with its unique cosmic background radiation that flows towards a sink (or sinks). The cosmic microwave background radiation could also support this theory, just as it did with the Hot Big Bang model.

“Everything in our galaxy moves like a pattern of fluid flow, from the Earth to the solar system and whatever we’ve been able to observe in our universe. The human body does this, plants as they grow, grain patterns, tornados, the continents as they split, the patterns of the Earth’s magnetic field and being shielded from geomagnetic storms, the paths of the stars, stellar remnants and interstellar gas and dust around galaxies. If we extend these patterns to the beginning at the Big Bang [in his theory, a pulse of a point source], we can build a general theory of what happened there and predict what could happen in the future.”

“If our universe originated as a point source which produces pulses of energy, at the same instant there must have been at least one sink (maybe a curve sink or some point sinks of gravitational pull) where the pulse moves towards the sink, like a fluid flow pattern. We can consider a Black Hole as a kind of sink, but many cosmologists believe Black Holes were formed after the Big Bang, and not at the instant of the Big Bang to produce the flow direction. But Black Holes could be a part of a moving pulse of our universe’s point source and of the galaxy’s acceleration into a sink.”

Prof Sharifpur believes applying his multidisciplinary Source and Sink Theory mathematically can offer an answer to each unanswered query.

Using his new theory, it is possible to provide many different scenarios for the arrangement of the point source and sink(s). Even a simple homogeneous spherical sink surrounding a point source can answer the unanswered questions of our universe. In this way, Dark Energy is the resultant gravity vector of the sink. The resultant gravity vector of the sink (the so-called Dark Energy) acts on different parts of the pulse of the point source like galaxies (with a possible pattern like a fluid flow), which causes the acceleration of the galaxies. While the galaxies go to the sink (from all directions), the so-called expansion of the universe happens.

“Another point of contention is that the Big Bang Theory needs the Inflation Theory to explain the size of the available universe – with the speed of the expansion more than the speed of light after Big Bang – however, the Source and Sink Theory does not need the Inflation Theory to explain the available size of universe, because it fully accounts for the fact that there must have been a kind of space between the Source and Sink from the beginning.”

The theories of Einstein and others like Alexander Friedmann and Alan Guth all have some basis in fact, and all have evidence to support them, just like Source and Sink Theory. For Prof Sharifpur, who has spent more than a decade working on this theory, this is only the beginning. Much more research needs to be done through applying this theory and its mathematical models to countless other scenarios. Prof Sharifpur relishes the impact his research has had on our understanding of the early universe and the meaning behind it all. The Source and Sink Theory offers a remarkable starting point to start answering what lies behind and at the very beginning of all the mysteries of the universe. 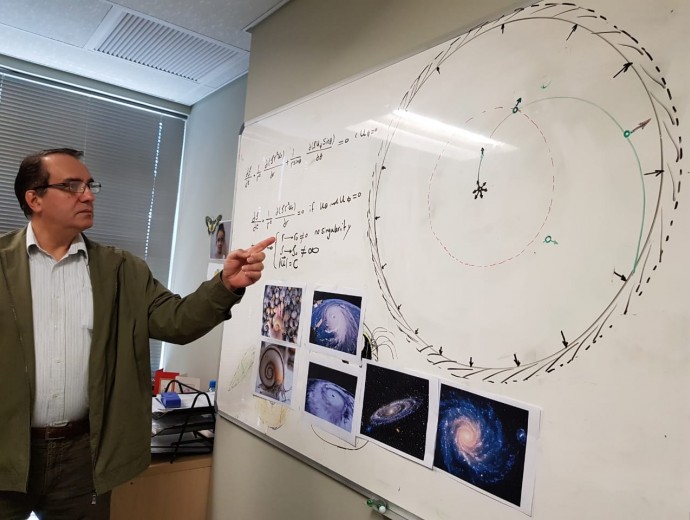