The University of Pretoria’s Institute for Sports Research (ISR), in collaboration with the Department of Mechanical and Aeronautical Engineering, and the High Performance Centre (hpc), have developed a ground-breaking tool to assist rugby teams in fine-tuning their scrumming technique. ‘It’s not just your usual scrum machine,’ says Prof Ernst Kruger of the ISR, whose brainchild this innovation is. ‘Our unique scrum machine will assist coaches to better prepare their forward packs for the scrum.’

The scrum is proving to be a contentious issue in the world of rugby. This is especially after the recent changes to scrumming laws, introduced to make the scrum safer by reducing the ‘hit’ when the two packs engage. Rugby enthusiasts around the world agree that the scrum can be a ‘nightmare,’ from collapsed scrums and differing rule interpretations, to incorrect scrumming. It has therefore become all the more important for teams to focus on the technical elements of scrumming, in order to gain the upper hand. It is exactly in this area of improving the coaching of scrumming where Prof Kruger’s team’s research, and the revolutionary scrum machine they have developed, will come into its own.

Kruger’s idea for the scrum machine was born over a cup of coffee with Chris Buitendag, a former coach of the Pumas, Lions and Griffons rugby teams. Buitendag too was concerned about the changes in the scrum rules and the importance of a team having the correct biomechanics to achieve success at the scrum. They agreed to research these issues, so as to make recommendations regarding the correct body positioning and foot positioning, which is regarded as the ‘real science behind the scrum’. After conducting a literature survey, Prof Kruger found that the French national rugby team has an adjustable scrum machine, while a couple of British universities have ones that can measure pushing power.

Prof Kruger then enlisted the hpc’s Head Biomechanist, Dr Helen Bayne, as well as Dr Cor-Jacques Kat of the Department of Mechanical and Aeronautical Engineering to form the research and development team. Dr Kat defines the scrum as:

a battle between two opposing forward packs, each attempting to manipulate the opponent’s scrum as part of an offensive or defensive strategy. This manipulation is achieved by controlling the forces and moments present between the two packs. The pack that is able to control these forces and moments will dominate the scrum.

The aim of the collaboration between the ISR and the respective Engineering and hpc departments was to investigate the forces produced during scrumming, and to customise a scrum machine that is capable of measuring three-dimensional forces and moments. The physics behind the machine’s ability to measure the magnitude and direction of the total force produced by a pack of forwards, or by an individual player during scrumming, especially the measurement of the turning moment a pack produces, involves smartly employing six force sensors and Newton’s second law (that is, the acceleration of an object as produced by a net force is directly proportional to the magnitude of the net force, in the same direction as the net force, and inversely proportional to the mass of the object).

Prof Kruger then met with TuksRugby to borrow one of their existing scrum machines, and, in April 2014, Dr Kat began designing the required modifications. According to Dr Kat, ‘The placement of the six force sensors was an interesting challenge as it had to fit and integrate into the existing frame of the scrum machine as well as be located and orientated so that, when combined with Newton’s second law, it would give the wanted three-dimensional forces and moments.’

In February 2015, the first trial run unearthed a few challenges. Firstly, when the players pushed, they lifted the front end of the scrum machine, which influenced the data. Secondly, the players were pushing against springs, which meant that when they hit, they moved forward, which also affected the data. Lastly, the scrum surface caused the players to lose their footing when they started to push.

Following more research conducted in March 2015, Prof Kruger’s team was able to overcome these challenges. In the first case, they added straps to the front end of the scrum machine to firmly anchor it into the ground. Secondly, they replaced the springs with a solid platform, and, finally, they used athletics starter blocks for the players to push against, thus preventing slipping.

With the next round of trial runs, they have been able to start gathering data by testing senior and junior rugby teams. Dr Bayne is confident that their scrum machine will be able to objectively measure force production during scrumming, and provide valuable feedback on elements of scrum safety, such as minimising downward forces that cause the scrum to collapse, as well as elements of performance, for example, how players are able to generate greater forces in the right direction through technical changes.

Prof Kruger’s team are confident that their scrum machine will be used as a coaching and training tool and enable research into various aspects of scrumming in the future, whether it is to improve performance, or to evaluate player safety and injury prevention. So what makes this UP-developed scrum machine perform head and shoulders above the rest? Dr Bayne answers: ‘To our knowledge, this is the only load cell-instrumented scrum machine, capable of providing three-dimensional force and moment data, in South Africa.’

The research team is not resting on its laurels, however: they are currently conducting a biomechanical research study to investigate scrumming technique of individual players for optimal force production. 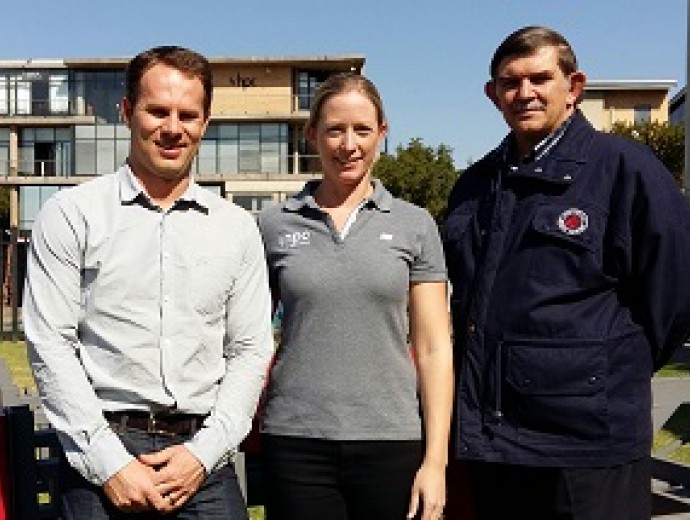