Seven UP Law academics were among the top achievers acknowledged and celebrated at the University of Pretoria's annual Academic Achievers’ Awards held on 3 November 2022.

Professor Charles Fombad received the prestigious Chancellor's Award for Research. Professors Steve Cornelius and Ann Skelton were two of only six UP academics who received Exceptional Academic Achievers Awards. Professors Joel Modiri and Gustav Muller were two of only five UP academics who received Exceptional Young Researchers Awards. Prof Danny Bradlow was one of four awardees recognised for Communication Excellence by The Conversation Africa.

Professor Fombad’s research focuses on comparative constitutionalism in Africa and is informed by his extensive experience and ability to bridge “common law” and “civil law” African legal traditions. He is an NRF B1-rated researcher and apart from numerous scholarly journal articles and books, he has also authored several expert reports as a consultant for international bodies, such as the African Union, the Max Planck Foundation for International Peace and the Rule of Law, the International Institute for Democracy and Electoral Assistance (International IDEA) programme for Sub-Saharan Africa and East Asia, and the Swedish International Development Co-operation Agency (SIDA). He is involved in several national and international scholarly bodies and societies and is also the coordinator of the Pretoria University Law Press (PULP) management committee, which publishes five accredited journals and has published over 250 books on African law.

Professor Skelton’s research focuses on international children’s rights, education law and restorative justice. She is an NRF B1-rated researcher, who has published her research in scholarly journal articles, books and book chapters. She has worked as a children’s rights lawyer for over 30 years and played a leading role in child law reform through her involvement with the South African Law Reform Commission in drafting the Child Justice Act and the Children’s Act. She was the Director of UP’s Centre for Child Law for over a decade and initiated its strategic impact litigation work. She is an advocate and has appeared as counsel in many landmark child law cases in South African courts, including 12 cases in the Constitutional Court. She currently serves as a member of the highest United Nations body on children’s rights, the UN Committee on the Rights of the Child, which meets regularly in Geneva to oversee the progress of State Parties under the Convention on the Rights of the Child. She also holds the UNESCO Chair in Education Law in Africa.

Professor Cornelius’ research focuses on the legal concept of fair play in sports and the significance of fundamental human rights in sports, as well as on the drafting and interpretation of contracts. He is an NRF B-2 rated researcher and has authored numerous scholarly journal articles, book chapters and books in his areas of expertise. He serves on several national and international sports bodies and tribunals and is part of the Athletics South Africa team that challenged the legality of the IAAF regulations in the Castor Semenya case before the Court of Arbitration for Sport and the Swiss Federal Tribunal, which matter is now being taken to the European Court of Human Rights. He was recently invited to join the panel of experts on Organised Crime and Sport, which advises the UN Office on Drugs and Crime (UNODC) on the role of organised crime in match-fixing, corruption and other crimes, such as money laundering in sport. He was also invited to join the panel of experts on Competition Manipulation, which advises the UNODC on the various forms of match-fixing and manipulation of sports competitions.

Professor Modiri’s research focuses on critical race theory, African jurisprudence, law and identity, feminist political philosophy, black political thought, legal education and critical pedagogy, critical human rights and constitutionalism theories. He has published numerous scholarly journal articles, book chapters and books. He has been a faculty member of Harvard Law School’s Institute for Global Law and Policy Africa Regional Workshop held in Cape Town. He also attended a fellowship at the Centre for Applied Legal Studies (CALS), University of the Witwatersrand. He was selected as an inaugural fellow in the Atlantic Fellowship for Racial Equity Programme (2018-2019) hosted by Columbia University and the Nelson Mandela Foundation. He was also awarded the 2019 Africa Oxford Law Visiting Fellowship. He is a member of the Section 11 Committee on Equality at the South African Human Rights Commission and was an invited speaker at the 17th and 18th sessions of the United Nations Intergovernmental Working Group on the Effective Implementation of the Durban Declaration and Programme of Action (DDPA). Prof Modiri has served as editor-in-chief of the South African Journal on Human Rights and his most recent edited collection is on Conquest, Constitutionalism And Democratic Contestations (Routledge, 2019).

Professor Muller’s research focuses on property law and housing law, in particular, the law of evictions and developing a meaning for “home” that is both normatively and substantively rich through a doctrinally driven and constitutionally inspired interpretation of legislation, case law, common law and international law. He is an NRF C2-rated researcher and has published numerous scholarly journal articles, book chapters and books. He also delivered a keynote address at the annual conference of the Young Property Lawyers’ Forum at the University of Monterrey in Mexico. He is the co-founder of the Property Law Reading Group with 33 members in South Africa and is also the co-founder of the International Resilient Property Law Group with 12 members. He was recently invited to join the Scientific Network on Eviction and Housing Rights (SNEHR), an academic network which forms part of the EVICT project (the University of Groningen, The Netherlands). He is a mentor in the Future Africa Research Leaders Fellowship programme which is funded by the Carnegie Foundation. He is the Editor-in-Chief of Silberberg and Schoeman’s The Law of Property 6th edition, the leading reference work on property law in South Africa and is the co-author of Property in Housing.

The Conversation Africa Award for Communication Excellence: Most articles published under the period in review

Professor Danny Bradlow is the SARChI Professor of International Development Law and African Economic Relations, based in the Centre for Human Rights. His research focuses on international financial law and human rights, and global economic governance. He is an NRF B1-rated researcher who has published widely in his areas of expertise in scholarly journals and books. In addition, he has published 39 articles in The Conversation Africa on topics ranging from the operations of the IMF and the World Bank, the 1971 decision of the United States to break the link between the US dollar and gold, central banks and climate change, central banks and human rights, and the contribution that a DOVE (Debts of Vulnerable Economies) Fund.

The Dean, Prof Elsabe Schoeman, in congratulating the top achievers, emphasised the value and impact of their research across the wide spectrum of law and social justice, nationally and internationally. Furthermore, she thanked them for being an inspiration to fellow colleagues and students, and for keeping UP Law at the cutting edge of research and research-informed teaching. 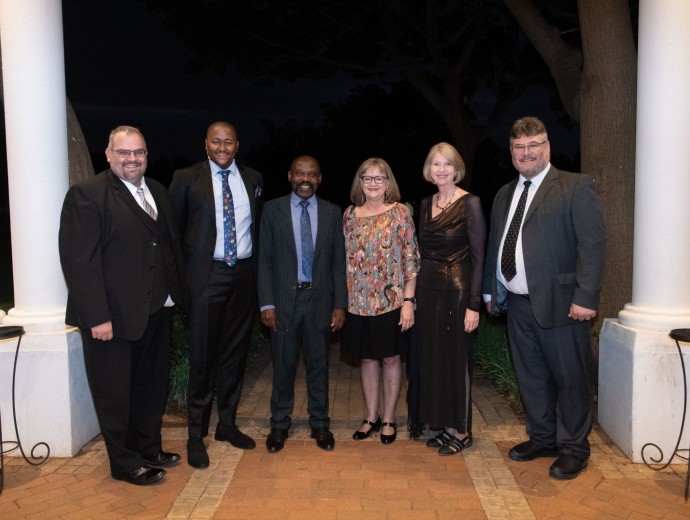