Mythology, History, Memory and Forgetting: The Foundations of South African Law at the Voortrekker Monument

On Thursday the 15th of September, the Jurisprudence 420 (Advanced Jurisprudence) elective final-year students headed to the Voortrekker Monument to attend a walking lecture hosted by the Department of Jurisprudence and presented by Prof Ramose, extraordinary professor at the Department. The walking lecture formed a recommended part of their studies for the course, which explores the silenced history and philosophy underpinning the foundations of South African law.

Word of the walking lecture however spread quickly reaching postgraduate students, assistant lecturers and lecturers from the department. With brown bag lunches, water, and cool drinks, the participants headed to the bus and then down the road and up the koppie.

Prof Ramose read the Monument through multiple prisms drawing on the substance of the course, beginning with an etymological examination of the word monument. He proceeded to political-theological and historiographical lenses, examining aspects of sovereignty, title to territory, just war theory, conquest, political arrangement, constitutional history, identity, and the makings of South Africa.

The lecture started by examining the immediate geographical surroundings and the significance of the place of the Monument’s erection and its specific alignment with the Union buildings and expansive views over the city. Prof Ramose also gave an overview of the Monument’s architectural elements as designed by Gerard Moerdijk and highlighted specific statues such as Anton van Wouw’s ‘mother and child’ and examined these in relation to other historical monuments, including the pyramids of Giza. The readings of the symbolism(s) invoked questions around humanity’s general preoccupation with gods, demi-gods and othering. The Anglo-Boer War, the Great Trek, Unification, Afrikaner Nationalism, and the National Party’s rise to power culminating in 1948 were explained in the exposition of historically significant moments relating to the Monument’s representations.

The lecture postulated the story of Afrikaners as told by the Monument and disclosed the unseen facts that still cast a shadow over the post-1994 democratic era. Different readings and understandings were juxtaposed and Prof Ramose’s reading made explicit history as an ambiguous idea – past events as well as the construction of narrative accounts. So too became clear the objectification of the indigenous conquered people represented as objects in another’s narrative, as unjust warriors who needed to be defended against. Prof Ramose read Afrikaans excerpts from the scholar and once Broederbond Deputy Chair Samuel Pauw, which made it clear that in the political imagination he represented there were only two populations in South Africa, the Briton and Boer. It was these people that were the subjects of the law and for whose purpose the political order existed. The walking lecture reminded the participants again of the fact that a people’s history and the stories we tell are a complex intertwinement of contested memory, differential power, the desire for self-determination, identity, iconic representation, spirituality, belong and non-belonging, subjection, freedom and unfreedom, justice and injustice.

The trip to the Voortrekker Monument provided everyone with the valuable opportunity to reflect on the pressing contemporary issues facing South Africans. It indeed pressed the question “who are South Africans?” from the point of view of South Africa’s political and legal history. During breaks, attendees were engaged in lively conversations and debates regarding the contemporary manifestations of old historical, legal and philosophical questions that loom over all of us today. 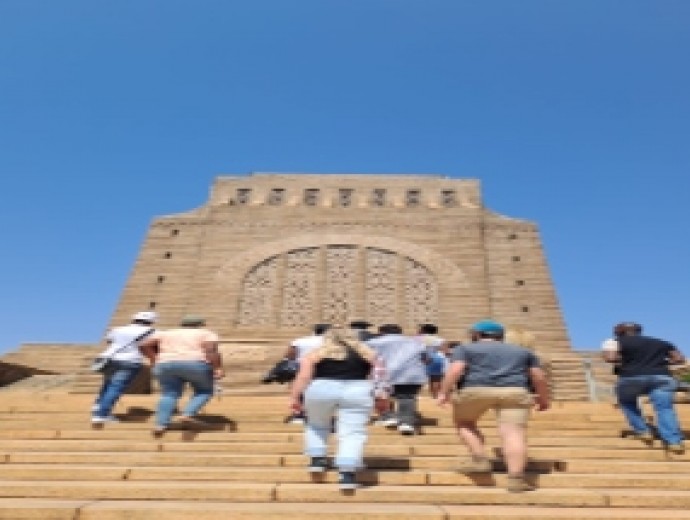