Call for Abstracts: 5th International Conference on the Right to Development

Promoting and protecting human and peoples’ rights including the right to development in accordance with the African Charter on Human and Peoples’ Rights is one of the key tenets of the Africa Union as proclaimed by its Constitutive Act.

Following the wind of democratisation across the African continent in the 90s, one would have expected a meaningful change especially in terms of peaceful transfer of power. But this has not been the case. In several countries, the constitution has been amended to allow for the incumbent regime to remain in power. But for the past few years, a new trend has emerged. In some parts of the continent a unique mechanic of “peaceful transfer of power” from father to son is being taking place. Back in 2001 after the assassination of Kabila the father in the Democratic Republic of Congo, Kabila the son took over. In 2005 following the decease of Gnassingbé the father in Togo, Gnassingbé the son became the president. In 2009 after the death of Bongo the father in Gabon, Bongo the son took over. More recently, in Chad after the killing of Deby the father, Deby the son was sworn in as president despite the constitution designating the chair of Parliament as the acting president. It is worth noting the presence of the French president during the swearing in of Deby as new president that somehow legitimises this mockery of democracy and epitomises neo-coloniasm. In the same vein, a similar transition is taking shape in other countries like the Republic of Congo where Nguesso the son is member of Parliament and Equatorial Guinea where Obiang Nguema the son is the deputy president to Obiang Nguema the father president.

These questionable practices that are an affront to constitutional democracy are aimed at confiscating power at the expense of the social contract. This probably explains the recent resurgence of coups d’état on the continent. Back in 2017 for instance a military takeover in Zimbabwe brought Robert Mugabe‘s 37-year rule to an end. For the past 18 months, several coups were orchestrated on the continent including in Burkina Faso (January 2022), Guinea (September 2021), Mali (August 2020 and May 2021) and Sudan (April 2019 and October 2021) that resulted in “forceful transfer of power”.

Confronted with these situations, regional and sub-regional organisations are left with no choice but to initiate actions in a bid to restore the rules of the game. In 2017 Yayah Jammeh, former president of the Gambia only stepped aside after the Economic Community of West African States (ECOWAS) sent in an army to forcefully remove him from power following his election defeat.

Recently, in September 2020, the African Court on Human and Peoples’ Rights issued an order to request the “reinstatement on the electoral list” of former Ivory Coast President Laurent Gbagbo and asked authorities to “take all necessary steps to immediately remove all obstacles” that prevent his participation in the election held on 31 October 2020. Such initiatives are in line with a key purpose of the Africa Union proclaimed by its constitutive Act, that is, the promotion and protection of human and peoples’ rights. All 54 AU member states have ratified the Constitutive Act and are legally compelled to uphold the rule of law and human rights including the right to development.

Despite these initiatives, it is worth nothing the inconsistency of such organisations regarding the syndrome of life presidency and coups d’état on the continent. With regard to the former, a silence has been observed when it comes to heads of state who continue to cling on to power despite the exhaustion of their term limit in violation of the constitution like in Ivory Coast, Guinea, Rwanda, Burundi and Uganda for the most recent cases. In these particular instances, the AU, ECOWAS and the East African Community (EAC) remain silent; a silence that is almost systematically broken whenever such leaders are forcefully removed from power through a coup d’état as exemplified by the recent cases of Burkina Faso, Guinea and Mali that until recently were under ECOWAS’ sanctions. It seems as though these developments highlight the dual nature of regional organisations that manifest themselves sometimes as direct protagonists and sometimes as bystanders.

The point is to assess the impact of these on the realisation of the right to development:

The conference will bring together experts from various fields including academics, emerging researchers, practitioners and policy designers to explore issues pertaining to the right to development, political transition, political instability, human rights and the rule of law from a critical, interdisciplinary, and contextually engaged perspectives.

We welcome contributions that focus on the following sub-themes or any related topic:

The three-day conference will follow a hybrid format and is scheduled to take place from Tuesday 01 November to Thursday 03 November 2022 with opportunities for individual and /or group presentations organised in panels. Contributions will be considered for an edited volume or special issue to be published in an accredited and peer reviewed journal in 2023.

Individual/Group Presentations: Submit a short abstract of no more than 300 words and a short CV/bio (150 words) to Gerard Kamga at [email protected] before or on 10 September 2022 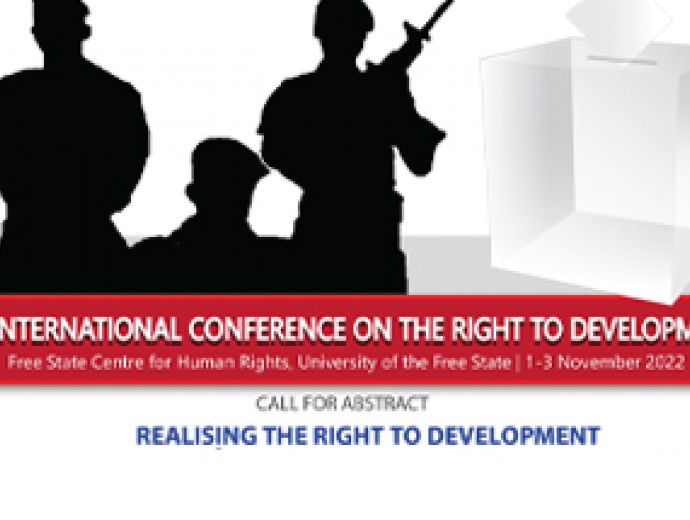 5th International Conference on the Right to Development