The Centre for Human Rights, Faculty of Law, University of Pretoria, condemns the disbarring of lawyer Muzi Simelane by Eswatini Chief Justice Bheki Maphalala. The Chief Justice disbarred Mr Simelane by way of notice in April 2018 on the basis of alleged contempt. Since he was banned from appearing in any court in Eswatini, Mr Simelane has not practised law for the past four years. The Chief Justice issued the notice from his chambers without any court hearing, application by the Law Society of Swaziland or determination by a tribunal that the lawyer had committed an act of misconduct. Chief Justice Maphalala purported to act in accordance with sections 139(5) and 142 of the Constitution of Eswatini when he issued the notice mero motu.  On 10 June 2022, Mr Simelane challenged his disbarment by the Chief Justice in the Supreme Court of Eswatini after several failed attempts to secure judicial redress.

Rule of Law and Constitutionalism

The Chief Justice based the disbarring on allegations that Mr Simelane had failed to pay back legal fees charged against his former client, Beauty Build Construction Pty Ltd. According to the Chief Justice, the fees charged by Mr Simelane exceeded the tariffs laid down by the law society and he ordered him to pay back the fees. The Law Society did not find any wrongdoing by Mr Simelane. The Chief Justice saw it fit that the alleged contempt of failing to pay back the fees, be punished by an administrative barring of Mr Simelane and not by an order of Court. Section 139(3) of the Eswatini Constitution provides that “the superior courts are superior courts of record and have the power to commit for contempt to themselves.” According to 139(5) the Eswatini Chief Justice is the head of the judiciary and is responsible for its administration and supervision. Section 142 provides that as head of the judiciary, the Chief Justice may make rules for regulating the practice and procedure of the superior and subordinate courts.

By ruling that Mr Simalane was in contempt of court without a Supreme Court order to that effect, as provided in section 139(3), the Chief Justice acted ultra vires the clear provisions of the Constitution. The Chief Justice took it upon himself to make a ruling in his chambers that Mr Simelane was in contempt of court and then issued a notice banning the lawyer from appearing in any court of law in Eswatini.  As provided in section 142, the rules regulating the practice of lawyers are made by the Law Society and not the head of the judiciary in Eswatini. The Chief Justice, therefore, acted unlawfully and not in accordance with constitutional provisions or any act of parliament.

Section 27 of the Eswatini Legal Practitioners Act provides that the Chief Justice or any Judge may suspend a lawyer from the roll upon application by the Law Society. It further provides that a court has inherent powers to punish a lawyer for any misconduct during proceedings before it. For instance, a court may hold a lawyer who is misbehaving or failing to obey its orders to have acted in contempt and sanctions may be imposed. Mr Simelane has complained that since the issuance of the notice by the Chief Justice he has been refused audience by all courts in Eswatini and he has failed to file any applications in court on behalf of his clients. In issuing the notice from his chambers without an application by the law society, the Chief Justice did not act in accordance with section 27 of the Legal Practitioners Act and his actions were thus unlawful. This was an act of abuse of office by the Chief Justice.

The Universal Declaration of Human Rights, the International Covenant on Civil and Political Rights and the African Charter on Human and Peoples’ Rights, to which Eswatini is a state party, enshrine the principles of the presumption of innocence, the right to a fair and public hearing by an independent and impartial tribunal. The Chief Justice issued the notice, without affording Mr Simelane a fair and public hearing, first of all, to establish his contempt and secondly to make a finding of professional misconduct in how he had treated Beauty Build Construction Pty Ltd. The administrative issuance of the notice barring Mr Simelane without due process, violates the right to a fair and public hearing, to be presumed innocent and to be heard by a competent, impartial and independent court.

Principle 16 of the UN Basic Principles on the role of lawyers provides that “governments shall ensure that lawyers are able to perform all of their professional functions without hindrance, harassment or improper interference and shall not suffer, or be threatened with, prosecution or administrative, economic or other sanctions for any action taken in accordance with recognised professional duties, standards and ethics.” Principle 19 provides that “no court or administrative authority before whom the right to counsel is recognised shall refuse to recognize the right of a lawyer to appear before it for his or her client unless that lawyer has been disqualified in accordance with national law and practice and in conformity with these principles.” Principle 28 provides that ‘disciplinary proceedings against lawyers shall be brought before an impartial disciplinary committee established by the legal profession, before an independent statutory authority, or before a court, and shall be subject to an independent judicial review.”

The state and the Chief Justice of Eswatini have failed to act in accordance with the UN Basic Principles on the role of lawyers. The law society did not set up any disciplinary hearing to decide on Mr Simelane’s alleged contempt. He was never disqualified from practising law by a tribunal properly constituted in terms of the Legal Practitioners Act. The sanctions imposed by the Chief Justice have barred Mr Simelane from representing his clients and for the past four years he has lost income and his livelihood has been affected.

The Centre, therefore, calls upon the Chief Justice to revoke his April 2018 ban against Mr Simelane and allow him to represent his clients without hindrance and practice his profession without undue interference. The government of Eswatini must ensure that lawyers are not unnecessarily intimidated, persecuted and hindered from practising and representing their clients by any arm of government or other third parties. 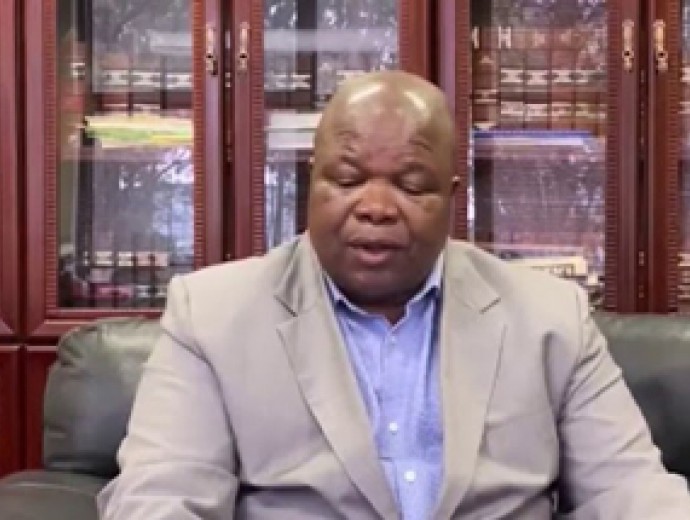