About a month after the African region reflected on progress in realising women’s rights with the adoption of the Protocol to the African Charter on Human and Peoples’ Rights on the Rights of Women in Africa (the Maputo Protocol) 18 years ago, the Centre for Human Rights, University of Pretoria, continued its efforts to support the implementation of the Maputo Protocol by ensuring states’ compliance with their treaty reporting obligations.

From 24 to 26 August 2021, the Centre, in collaboration with the Ministry of Foreign Affairs and International Cooperation of Sierra Leone (MFAIC), hosted a capacity building workshop on state reporting under the African Charter on Human and Peoples’ Rights (African Charter) and the Maputo Protocol. The workshop was held at the Golden Tulip Hotel in Freetown, Sierra Leone.

The workshop was geared towards strengthening the capacity of state representatives who would be part of the reporting process for Sierra Leone, representatives of the Human Rights Commission of Sierra Leone and civil society organisations (CSOs) on their role in fulfilling the state’s reporting obligations. The workshop considered their roles in developing the country’s state reports and their roles in developing accompanying shadow reports for submission to the African Commission on Human and Peoples’ Rights (African Commission).

The Deputy Minister of Foreign Affairs and International Cooperation, Honourable Mamadi Gobeh Kamara, made welcome remarks. She emphasised the importance of state reporting and noted that Sierra Leone ratified the African Charter in 1983 and the Maputo Protocol in 2003 without reservation. Citing several measures put in place by the state to protect and promote the rights of women, Honourable Kamara noted that “state reporting is important in order to maintain and uphold human rights in our country”.

Following this strong show of political will to comply with the state’s reporting obligations, opening statements were made by the Deputy Director of the Ministry of Social Welfare, Ms Fatmata Ansumana, the Chairperson of the Human Rights Commission of Sierra Leone, Ms Patricia Narsu Ndanema, and the Treasurer of the Sierra Leone Bar Association, Ms Martina Ebgenda Esq. They noted that gender inequality and denial of women’s rights were prevalent at all levels in Sierra Leonean society. Despite significant strides made in the realisation of women’s rights, many women continue to suffer marginalisation and discrimination, particularly in the areas of education, employment, political participation, and social justice. Issues of unequal opportunities for boys and girls continue to be exacerbated by factors such as early marriage for girls, teenage pregnancies and harmful practices such as female genital mutilation (FGM).

Reflections by presenters and participants during the workshop demonstrated that Sierra Leone has made progress in realising gender equality and enabling the empowerment of women in line with the Maputo Protocol and the African Charter. Laws that have been enacted include the Domestic Violence Act 2007, Devolution of Estates Act 2007, Registration of Customary Marriage and Divorce Act 2009, Child Rights Act 2007 and the Sexual Offences Act 2012. Presentations on the situation of women and girls in Sierra Leone and the role of CSOs in holding the state accountable were presented in sessions by Mr Victor I. Lansana Esq, a Commissioner and Vice Chairman of Human Rights Commission of Sierra Leone and Mr Alphonso Gbanie, the Executive Director for the Human Rights Defenders Network. Facilitators of the workshop from the Centre’s Women’s Rights Unit were Ms Matilda Lasseko-Phooko, Ms Susan Mutambasere and Ms Lydia Chibwe. The participants noted that they benefitted from learning about the state reporting obligations in terms of the African Charter and the Maputo Protocol through presentations that were done by Ms Matilda Lasseko-Phooko and Ms Susan Mutambasere.

In concluding the training, the Deputy Director General, Policy, of the MFAIC noted that Sierra Leone was ready for the training and was looking forward to fulfilling its reporting obligations. Delivering the closing remarks, the Minister of Social Welfare, Honourable Baindu Dassam, noted that “state reporting is a valuable process which the Sierra Leonean government is taking seriously and looking forward to doing on time”.

The workshop was a follow-up on a training in 2014 and a regional training with participants from Liberia, Ghana, Guinea and Sierra Leone, hosted by the Centre. However, the refresher session was crafted to address Sierra Leone’s country-specific challenges in submitting its state report as it has not yet reported under Maputo Protocol. The Centre aims to support the country to report on the Maputo Protocol and enable it to join the 17 states whose submitted reports have been examined by the African Commission. Following the workshop, the Centre and the MFAIC agreed to engage a technical assistant who will work with all the relevant stakeholders in producing a draft state report for validation and eventual submission to the African Commission.

For more information on the state reporting process and the Maputo Protocol, visit: www.maputoprotocol.up.ac.za 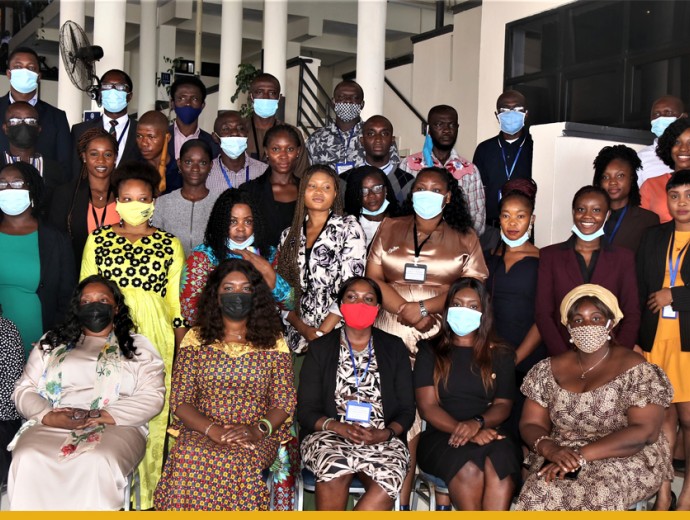