The director of the UP Law Clinic, Eddie Hanekom, recently participated in a skydiving competition, hosted by the local Skydiving club Skydive Pretoria, at Wonderboom National Airport.

An annual event, the competition is called the “Peter Lawson Cup”, named after one of the most celebrated champion skydivers in the country, Peter Lawson. For many years Lawson was a shareholder in Pretoria Skydiving Club as well, and he has received the Aero Club of South Africa’s “Gold Wings Award” in 2005.

This year’s competition started on 21 September 2019 and ended with a prize-giving ceremony on 24 September, Heritage day.

Hanekom is a member of the oldest permanent skydiving team in the RSA, called the “United Nations Skydiving Brotherhood”. This team was formed in 1989, and Hanekom was invited to become a member in 1999.

Not only is it the oldest team in South Africa, but it also boasts the oldest active skydivers in the country. The most senior skydiver is 68, and another two team members are 64 and 62 respectively, leaving Hanekom at age 56, one of the younger members. One of the team members is female, and the team represents a diverse number of nationalities. Italian, Greek, American, Portuguese and the British are represented, as well as of course South Africans.

Having started parachuting in 1982, Hanekom has been jumping out of serviceable aeroplanes for 37 years.

His team competed in the skydiving discipline called “8-way Speedstars”. For the uninitiated, this means that eight team members jump out of the aeroplane unlinked (not holding on to each other), and in quick succession, then freefall down at speeds up to 300 kilometres per hour, to form a star in the sky. After they have held the star for three seconds, they then track in a bombshell pattern away from each other in the sky and open their parachutes.

A ninth team member is a dedicated cameraman, and his job is not to join the formation, but to film it. Once he has landed he hands the footage over to the judges on the ground, who then watch it and judge whether the task had been completed successfully. They also use an electronic timing system to judge how fast the team completed the “speedstar”. The team with the fastest average time to the star, over three judged skydives, wins.

In most other sports the team would have been able to compete in the "Masters" category, i.e. participants over the age of 50, but with only 573 registered skydivers in South Africa, there are no such categories. Consequently the team competed against much younger skydivers.

After some fierce competition, the UN Skydiving Brotherhood emerged victorious as the winners of the 2019 Peter Lawson Cup 8-way Speedstars competition.

As long as you are relatively healthy, Hanekom says you can still actively enjoy extreme sports. Smiling, he also says that there is no truth in the rumour that the younger skydivers that competed against his team deliberately let them win!

Not bad for a bunch of old guys! 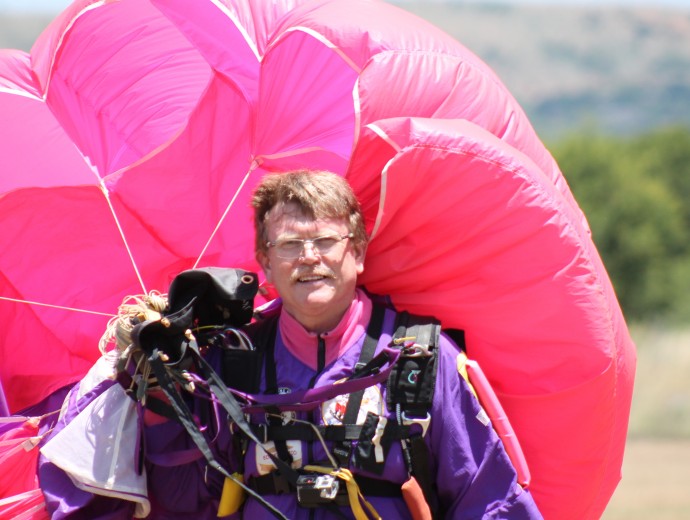