SUMMARY: In 2015, the African Commission on Human and Peoples’ Rights (African Commission), based in Banjul, The Gambia, and the AU body supervising state compliance with the African Charter on Human and Peoples’ Rights, granted observer status to the NGO Coalition of African Lesbians (CAL). When the Executive Council of the African Union (AU), with its headquarters in Addis Ababa, Ethiopia, subsequently considered the Commission’s activity report, it directed the African Commission to retract the observer status granted to CAL. A potential deadlock was avoided when two NGOs (the Centre for Human Rights and CAL) submitted a request for an advisory opinion to the African Court on Human and Peoples’ Rights, soliciting the Court’s view on how the matter could be resolved. However, the Court has now declined to give its view, on the basis that the two NGOs were not competent to bring the request. This decision puts the Commission and the Executive Council on a potential collision course. The circumstances of the case revealed that the system of NGO obtaining observer status with the AU is illusory, as no NGO has as yet obtained this status.

In its decision on the Commission’s activity report, the Executive Council “requested” the African Commission to “take into account the fundamental African values, identity and good traditions, and to withdraw the observer status granted to NGOs who may attempt to impose values contrary to the African values” and specifically requested the Commission “to withdraw the observer status granted to the Organization called CAL, in line with those African Values.”

The Executive Council’s directive puts the African Commission in an unenviable position. It may either comply with the directive, thus undermining its role as an independent and autonomous body tasked with interpreting the African Charter on Human and Peoples’ Rights (African Charter). Or the Commission may refuse to follow the directive, potentially causing a rift between it and one of the AU’s most prominent political organs. One should not lose sight of the fact that the African Commission has been established by the AU member states, when it adopted the African Charter in 1981, and that it is the AU that elects the Commission’s members and maintains its secretariat. It is indeed the paradox at the heart of international human rights law: supervisory mechanisms are set up and maintained by the very same states that are scrutinised and held accountable by these mechanisms.

The African Commission has to date not responded to the Executive Council’s directive, on the basis that a case related to the matter was pending before the African Court. In this case, two NGOs, the Centre for Human Rights, Faculty of Law, University of Pretoria (Centre), and CAL, in November 2015 approached the African Court with a request for an advisory opinion. Having now considered this request, the Court found that the NGOs were not entitled to make such a request; the Court therefore did not answer the substantive question posed by way of the request for an advisory opinion.

The question that the Court did not answer is: Did the Executive Council exceed its authority to “examine” the Commission’s activity reports when it directed the Commission to reverse its decision to grant observer status to CAL? This is an important question that seeks to clarify power relations within the AU. The African Commission is a quasi-judicial body (a body that functions very much like a court but does not issue binding decisions, as such).

According to the Court Protocol, AU member states, AU organs and “African organisations recognized by the AU” are entitled to submit request for advisory opinions to the Court. Before it could consider the substantive question posed, the Court therefore first had to establish whether the Centre and CAL were “African organisations recognized by the AU”. The two NGOs argued that they have such recognition, based on the fact that they both enjoy observer status with the African Commission. Following its decision in the request by Socio-economic Rights Accountability Project (SERAP) earlier this year, the Court found that the two NGOs did not enjoy recognition by the “AU”, as such, because they were not granted observer status under the AU’s “Criteria for granting observer status and for a system of accreditation within the AU’, adopted in 2005. In other words, the Court drew a distinction between recognition by the AU (that is, through the AU Commission/ AUC), on the one hand, and recognition by an AU organ, such as the African Commission, on the other.

The Court arrives at this conclusion by giving a very literalist interpretation to the text of the Court Protocol, and by referring very explicitly to the intention of the Protocol’s drafters. In this regard, the Court held that, if the drafters wanted AU organs, and in particular, the African Commission, to be included as entities whose recognition of NGOs would be adequate for the purpose of making advisory requests, they would have included an explicit provision to this effect.

In the Centre’s view, this conclusion is incorrect. A different approach leads to a very different conclusion than that of the Court.

In its judgment, the Court seems to depart from the premise that NGOs in principle have the competence to request advisory opinions. The issue is only the specific conditions that have to be met. These conditions are that the NGO must be ”African”, an “organization” and must enjoy “recognition by the AU”. However, by reading the term “AU” restrictively, as only referring to the AU as a separate legal entity and not also as the AU acting through its organs, the Court’s finding leads to an absurdity. The criteria established by the AU are not well known to NGOs and civil society more broadly. Immediately after the judgment was given, repeated attempts to locate an electronic copy of these Guidelines on the Court or the AU’s web site were made, but they were all in vain. So, too, were all our attempts to ascertain how many NGOS, if any, had been granted observer status under the 2005 AU criteria.

A subsequent visit to the AU headquarters, including to the Office of the Legal Counsel and the Department of Legal Affairs, ensured access to a hard copy of the AU Guidelines; and also revealed that there were in fact no NGO that could be cited as having secured this form of observer status.

The Court thus postulates a possibility, that of NGOs submitting requests for advisory opinions, which does not exist in reality. The Court’s reasoning creates the illusion of access, but in practice does not lead to any NGO actually having the competence to ask the Court for an advisory opinion.

A literalist interpretation, as adopted by the Court, therefore leads to the absurd consequence that no NGO is in fact able to submit a request. This could not have been the intention of the drafters. The rules of interpretation hold that a literalist approach should be abandoned if it leads to an absurdity. In this instance, the absurdity can easily be avoided by interpreting ”AU” as encompassing the AU acting through its organs, such as the African Commission.

Observer status and MOUs with the AUC

In its practice, the AU admits as much. When any NGO applies for AU observer status, the AU Legal Counsel sends a standard letter to the applicant, pointing out how “rigorous” the process is, and advising the NGO to rather seek to enter into a Memorandum of Understanding (MOU) with the AU. The letter reads in part as follows: “However, we need to point out that the process for the granting of observer status is a rigorous one. You may therefore wish to consider liaising with the Directorate of Communication and Information Department of the African Union Commission on the possibility of signing a Memorandum of Understanding (MOU) with the Commission.”

It is not so much that the process is rigorous. It is rather a case of very restrictive conditions, which very few NGOs working in the field of human rights and governance would be able to meet. The main impediment is at least two-thirds of such an “NGOs resources must be derived from contribution of its members”. What these criteria seem to have in mind, in other words, are grassroots organisations with a wide membership. Even if these AU Guidelines were applied in practice, very few if any African NGOs devoted to upholding governance, rule of law and human rights would have been eligible for observer status, as most of them are small NGOs reliant on external rather than membership funding.

The understanding that an MOU with the AUC would constitute “recognition by the AU” (for the purpose of the Court Protocol) was not apparent from the Court Protocol. The Court’s Advisory Opinion in the SERAP case introduced this understanding. NGOs that have, by the time the SERAP Opinion was handed down, already submitted cases were not aware of this criterion. The Court should have, before applying the criteria its subsequent case law, have communicated with the NGOs to ascertain whether at the time when they submitted they had entered into an MOU with the AUC.

It seems still desirable that the Court should resolve what is essentially an intra-AU constitutional dispute. For the matter to end up before the Court, as a request for an advisory opinion, there are two realistic possibilities.

First, any AU organ, such as the African Commission, may submit such a request. Such a course of action would require the members of the Commission (or any other AU organ) to reach a decision to refer the case for an advisory opinion by the Court. As no AU organ has as yet made such a request, there is no precedent on which any of the bodies may rely.

Second, an NGO that has the required MOU with the AUC in place may be persuaded to submit a request to the Court that in substance mirrors the one submitted by the Centre and CAL, but which was rejected by the Court. The Centre and CAL are in discussions with NGOs that have MOUs with the AUC to explore the possibility of any of them submitting a request for an advisory opinion to the Court, related to the powers of the Executive Council to dictate to the African Commission to whom it may grant observer status, based on its interpretation of the African Charter.

Theoretically, there are two other possibilities, but they are less likely to be used. The one is the possibility of a request by a state party. Given the geopolitical resonance of the matter, no AU member state is likely to do so. No state has thus far approached the Court for an advisory request of any kind. The other is a possible request by an NGO that has been granted observer status according to AU criteria. Given that no NGO has actually been granted observer status under the AU criteria, this is not a possibility, but a mere illusion. It also remains unlikely that any NGO would be granted this status any day soon.

“If the Court’s advisory role is not brought into play, the Executive Council and African Commission remain on a collision course that may seriously erode human rights protection within the AU”, remarked the Director of the Centre, Frans Viljoen. 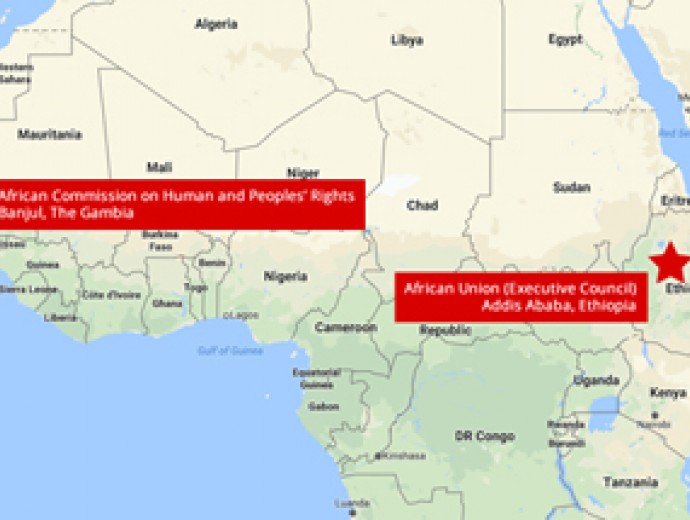