Centre for Human Rights, University of Pretoria calls for extension of due date for submissions on ICC withdrawal.

(On 22 February  2017 the Centre for Human Rights welcomed the judgment of the Full Bench of Gauteng Division, Pretoria, in the matter of Democratic Alliance v Minister of International Relations and Cooperation and Others (case no. 83145/16). The CHR, represented by the Legal Resources Centre, was joined as a party to the proceedings by the applicant for its interest in the matter. Read the joint statement with the LRC here.)

For the urgent attention of:

1. We act for the Centre for Human Rights (“our client”).

2. We refer to the call for comment issued on 14 February 2017 regarding the  Implementation of the Rome Statute of the International Criminal Court Act Repeal  Bill [B23-2016] (“the Bill”), which indicates the deadline for submissions is  8 March 2017.

3. We refer further to the judgment of the High Court of South Africa (Gauteng  Division, Pretoria) in the matter of Democratic Alliance v Minister of International  Relations and Cooperation and Others (case number 83145/16), in which our client  was cited and participated as the ninth respondent. As you will be aware, the  High Court declared, inter alia, that the notice of withdrawal from the Rome Statute  of the International Criminal Court (“the Rome Statute”), signed on 19 October  2016, without parliamentary approval, was unconstitutional and invalid. (For ease  of reference, a copy of the judgment is enclosed together with this letter.)

4. The content of the Bill, and the broader impact that this will have domestically and  internationally (including regionally), is self-evidently a matter of significant public  interest and importance. The value of hearing from a wide range of stakeholders  and affected persons in this regard cannot be gainsaid. Accordingly, and  particularly in light of the abovementioned judgment, our client urges the  Portfolio Committee to extend the deadline for submissions at least until 31 March  2017, to ensure that a broad consultative process may be achieved.

5. We note further that, in the call for comment published on the Parliamentary  Monitoring Group website1 and on Parliament’s website,2 the Instrument of  Withdrawal from the Rome Statute and the Declaratory Statement by the Republic  of South Africa on the Decision to Withdraw from the Rome Statute do not appear  to be available. However, the call for comment expressly invites submissions on  these documents as well. While our client was able to obtain copies of these  documents by contacting the Office of the Portfolio Committee, it is imperative that  these documents be made readily accessible to the public without delay (including  on these websites), and that the public be afforded sufficient time to comment  thereon.

6. Lastly, we have been instructed to note that our client wishes to participate in the  public hearings. As such, our client requests that it be notified of the schedule of  hearings as soon as possible, and that it be afforded the opportunity to make oral  submissions to the Portfolio Committee.

7. We look forward to hearing from you. 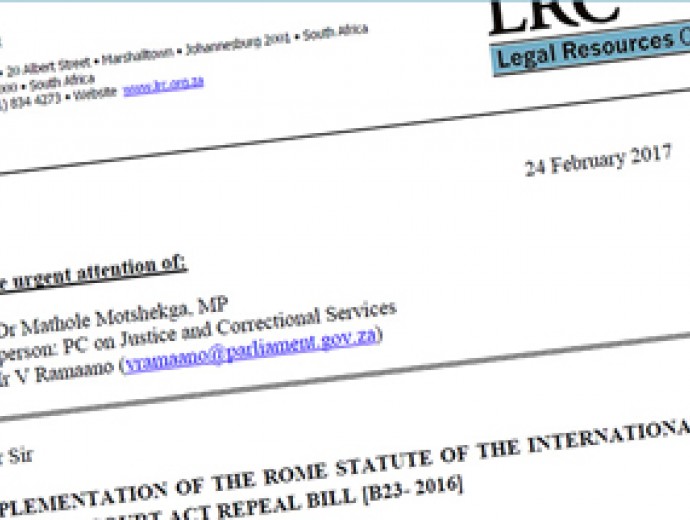