Participants included legal practitioners from across the country, academics and students. The facilitator at the event was Mr Max Boqwana (Co-Chairperson, Law Society of South Africa). The colloquium took place at the Groenkloof Campus of the University of Pretoria where the Faculty of Education is based. Prof Irma Eloff (Dean, Faculty of Education, University of Pretoria) and Prof Frans Viljoen (Director, Centre for Human Rights) welcomed the guests.

The colloquium was organised to discuss recent developments around the decisions of the South African Public Protector especially in light of a recent court judgment in which it was held that her decisions are not binding. According to the judgment, the Public Protector’s decisions are recommendations to government departments and officials.

In his presentation, Prof Mhango examined the thinking in the recent judgment. He discussed the court’s reliance on a British case where it was decided that decisions of the British Ombudsman cannot be binding. He noted that part of the challenge of having binding decisions from the Public Protector was that the office investigates, prosecutes and then makes a finding. In general, investigation, prosecution and making a finding were done by different institutions under South African law and helped to maintain a balance when delivering justice. If the Public Protector’s decisions were binding they would go against the established standards for fairness.

In her presentation at the colloquium, the Public Protector was of the view that the recent judgment needed to be clarified by the Constitutional Court. However, she noted that the South African Constitution clearly states that the Public Protector has “to take appropriate remedial action.” It was therefore interesting to note that the court indicated that the role is to only give recommendations. She noted that the Public Protector originates from Sweden which is a civil law country and uses an inquisitorial approach in delivering justice as opposed to an acquisitorial system in a common law country such as South Africa. The framers of the South African Constitution were aware of the inquisitorial nature of the Ombudsman when establishing the Public Protector’s office and making it part of the constitutional order. She was of the view that the over-reliance on British precedents in deciding what the role of the Public Protector in South Africa should be needed a careful approach as it was a different jurisdiction with its own approach. She explained that for instance in Sweden the Ombudsman has immense powers including that of reviewing decisions of a court of law, which is not the case in Britain. She suggested that in looking at whether the Public Protector’s decisions are binding or not, one had to look at what the position was with regard to other Chapter 9 institutions. For example, the Independent Electoral Commission has powers to make binding decisions which can only be overturned through a court of law.

Judge Yacoob was of the view that the Public Protector’s office had to be independent and only accountable to Parliament and not to the government in as much as the latter would have wished that it is accountable to it. Taking appropriate measures could mean that decisions can be binding such as those of the Commission for Conciliation, Mediation and Arbitration (CCMA) and Competition Commission. He advised against paying too much attention to terminology such as “findings” and “recommendations”. He further cautioned against relying excessively on British decisions as there is a difference between the Public Protector in South Africa and Ombudsman in the Britain. He called on all to respect the Public Protector but that decisions can be taken on review where differences arise.

Mr Naidoo noted that South Africa had not simply copied and pasted the office of Ombudsman from other countries but took into consideration the needs of the society. It was important to keep in mind that South Africa is a constitutional democracy and the functions of the Public Protector go beyond those of the Ombudsman in many countries. The Constitution allows for redress or steps to be taken and that is why it has allowed for remedial action.

A lively discussion followed the presentation with a number of questions posed around the views espoused by the presenters.

Mr Busani Mabunda (Council member of the Law Society of South Africa) gave the closing remarks noting that the Public Protector was playing a vital role in South Africa by fearlessly confronting maladministration and that her legacy will be one of which society should be proud. 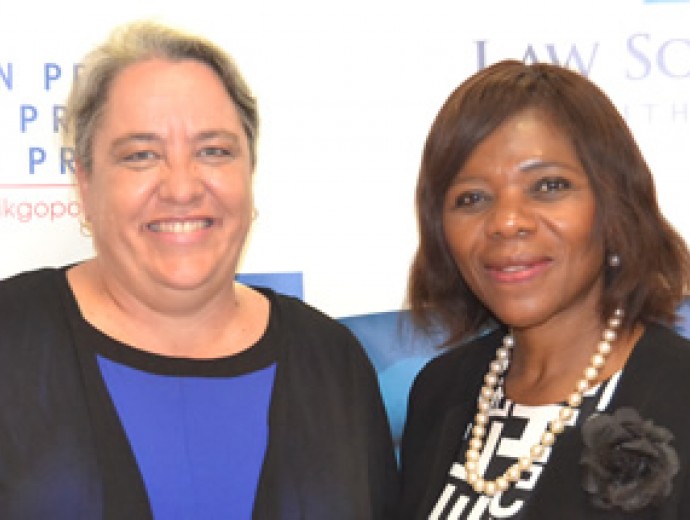