UP Biotechnologist one of the Next Einsteins

The Next Einstein Forum (NEF) is a platform that leverages scientists to solve global challenges by bringing together leading thinkers in science, policy, industry and civil society in Africa.  As an initiative of the African Institute for Mathematical Sciences (AIMS) and the Robert Bosch Stiftung, NEF mobilises the brightest minds to look into the most persistent problems through Science, Technology, Engineering and Mathematics (STEM), as well as the social sciences.

Pelly Malebe is a PhD candidate in the Department of Biochemistry, under supervision of Prof Apostolides. She graduated with a BSc in Human Genetics and an MSc in Biotechnology, both from UP. During her honours and master's studies, she worked as a teaching assistant. She is a member of the Golden Key International Honour Society.

Her current research focuses on identifying and developing molecular markers for drought tolerance and yield in the tea plant. The potential outputs of this research are robust molecular markers that can be used in a selection process in order to improve the yield of tea produced by the global tea industry. Her focus is on increasing the understanding of the genetic basis of drought tolerance in plants, as this knowledge may impact on food and job security through breeding of drought-tolerant crop varieties.

A provisional patent was filed on the results of the research that she conducted during her MSc study. Final filing of this patent with the African Regional Intellectual Property Organisation, as well as in India, Sri Lanka, China and South Africa is underway.

This research is partly funded by UP's Institutional Research Themes in Genomics. Pelly received the National Research Foundation Doctoral Innovation Award, as well as the Southern African Biochemistry and Informatics for Natural Products Network (SABINA) Doctoral Fellowship which is funded by the Carnegie Corporation of New York. In 2008, she received an Award of Merit for outstanding academic achievement from the Department of Biochemistry at the University of Pretoria. She was awarded with the NRF's honours, master's and doctoral Innovation Awards. She also received a SABINA Network PhD Fellowship.

Pelly's interest in science already started at a very young age, because she was a curious child. She later found that the answers to some of her questions could be found in genetics textbooks.

The NEF global gathering took place earlier this year in Dakar, Senegal. NEF compiled a targeted team of 54 young ambassadors, one from each African country, who participated in the NEF Global Gathering 2016, to champion African science, technology, engineering and mathematics globally and they are part of the growing NEF community. The Next Einstein Forum global gathering was attended by world leaders and they joined the movement. Macky Sall (President of Senegal), Paul Kagame (President of Rwanda) and Naledi Pandor (Minister of Science and Technology, South Africa) were among the world leaders that were present at the global gathering and have signed on in support of this movement. 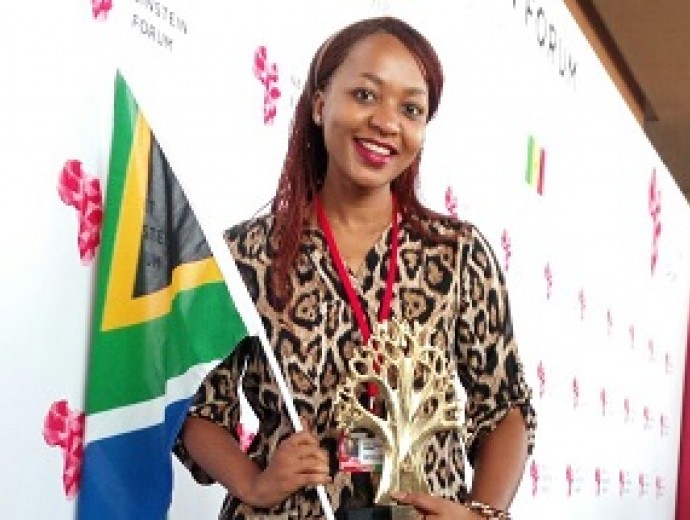