Kolkata - A city of contrasts

Kolkata is the second largest city in India situated in West Bengal. Kolkata for most visitors conjures up images of human suffering and poverty. This is a partial picture of this vibrant city. It is a city of contrasts, not unlike South Africa, noble and squalid; historic and futuristic simultaneously. Kolkata is considered India’s artistic, cultural and intellectual capital and has been associated with five Nobel Laureates including Amartya Sen (Economics), Mother Theresa and Rabindranath Tagore. Rabindranath Tagore was the first non-European awarded the Nobel Laureate (Literature) for his book Ganjali. His poetry and teachings still echo in the current education system encouraging active personhood contained in his words, “You can’t cross the sea merely by standing and staring at the water”. These active philosophies may be partially attributable to Kolkata boasting an overall literacy rate of 87.14%.

Prof. Shakila Dada visited Professor Santoshi Halder at the University of Calcutta, India.  This was part of a  funded research project by the National Institute of Humanities and Social Sciences (NIHSS) and Indian Council for Social Science Research (ICSSR). The research project focussed on children with disabilities in the respective countries.  As part of the visit Shakila Dada presented a seminar entitled “ Participation: Including voices of vulnerable groups” to post graduate students and staff at the University of Calcutta. She also visited Amrit Somani Memorial Centre, a Centre focussed on interventions for children with Autism Spectrum Disorders. Finally, she spend a full day at the Indian Institute for Cerebral Palsy (IICP). The IICP is a centre that focusses on children with cerebral palsy including those who require AAC. It contains an inclusive school, parent training as well as a vocational training focus. Their models of service delivery are innovative and they have been at the forefront of developing appropriate AAC systems for their context. 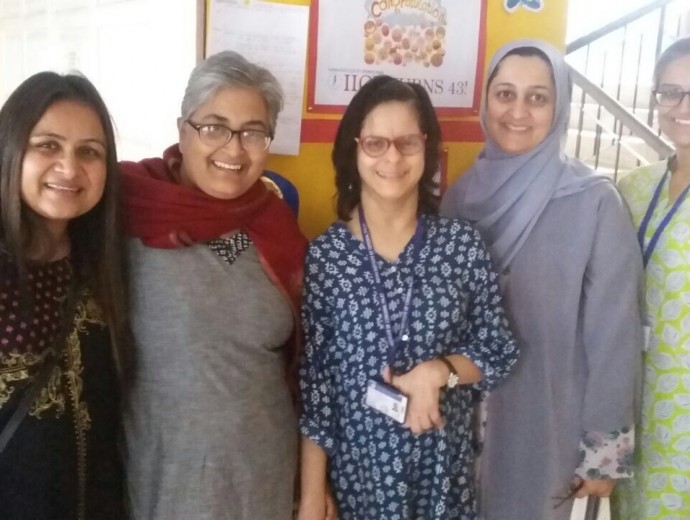