Blissymbolics – international recognition for graduate from Centre for AAC

Blissymbolics – international recognition for graduate from Centre for AAC

Mrs Louisa Alberts, a former BA Hons (AAC) graduate from the Centre for Augmentative and Alternative Communication (CAAC) and a teacher from Platorand School in Belfast, Mpumalanga started to teach Blissymbolics to learners in her class who struggled to read and write.

Blissymbolics, is a symbol system that currently consists of 5,588 graphic symbols. It was designed by Charles K. Bliss, who got his inspiration from the Chinese symbols. Each of these symbols represents an entity or concept. All the symbols can be used in combination to create symbols with new meaning. Due to its symbolic nature, can Blissymbols be read and understood in any language All Blissymbols are copyrighted. Suggested symbols from countries all over the world must first be accepted by the Blissymbolics Communication International (BCI) board.

Mrs Alberts attended the BCI course “The structure and use of Blissymbolics” presented byDr Margareta Jennische and Britt Amberntsson in Uppsala, Sweden in October 2015. Thereafter, Mrs Alberts, together with Ms Kristin van der Merwe, a PhD student in Linguistics at the Rhodes University translated the English Blissymbolics vocabulary to Afrikaans. The translated vocabulary is currently being edited by Dr Ensa Johnson, a lecturer at the CAAC, where after Mr Mats Lundälv, President of the BCI Board will approve it for publication on Blissonline (www.blissonline.se). Once it is integrated in Blissonline, Afrikaans will be one of the many languages (glosses) you can choose from that will appear underneath or on top of the Bliss word as you type. Mrs Louisa Alberts and some of her learners in her class. 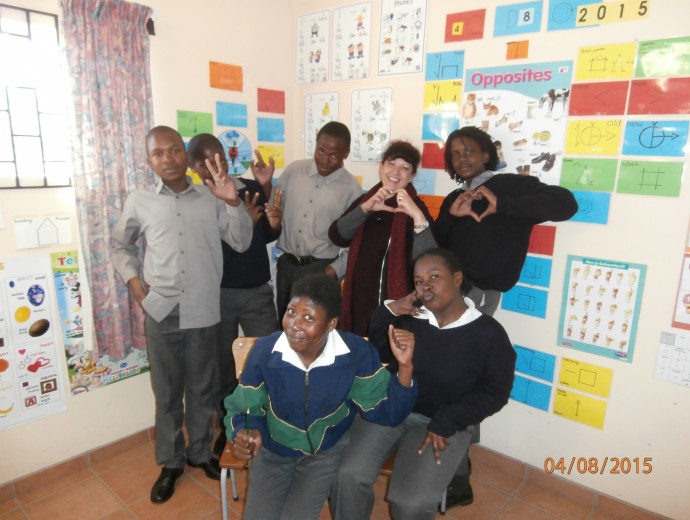