Dreams at first seem impossible, then seem improbable, and finally when we commit ourselves, become inevitable – Mahatma Ghandi

Dreams become inevitable when we commit to them and, perhaps equally important, when those around us also commit to them. Dreams are an important part of our lives. They help give direction to what we do with our time and lives. We all have dreams. Many are able to realise their dreams. Many do not dream, some are afraid to dream, many do not dare to dream because they have a disability. They do not even dare to dream simple dreams of being able to express their feelings, emotions and thoughts, and of developing relationships.

The book Ghost Boy tells a story that demonstrates the importance of dreaming and of committing to the dreams even if you have a disability. Martin Pistorius’ autobiography, co-authored by Megan Lloyd-Davies, is now on the New York Times best-seller list. Ghost Boy is the true story of Martin, a South African who now lives in the UK. It tells of his sudden illness at the age of 12, his gradual loss of speech and ability to walk and perform simple activities, and then of his gradual awakening and improvement. It is an inspiring story of hope, love and perseverance. The reason for his illness is unknown to this day. Martin’s story serves as an inspiration for many who are able to hear but unable to speak.

My first contact with Martin occurred in 2001 at the Centre for Augmentative and Alternative Communication (CAAC) at the University of Pretoria. He was referred to the Centre by an aromatherapist who believed in his potential. The Centre provides consultative services about the best ways to improve communication among the person with the disability, his or her professional teams and family members. Augmentative and alternative communication (AAC) refers to modes of communication that are used less frequently, for example the use of natural gestures or signs, vocalisations, objects, photographs, line drawings, and traditional orthography (text). To be able to assist a person who is unable to communicate, the person’s strengths and abilities must be assessed carefully using a variety of strategies, for instance communication boards, laptops, various communication devices and mobile technologies. It also entails making sure that the person is able to learn to use the chosen communication system(s) by using a switch, an eye gaze system, hands, fingers or a body part.

At the initial consultation, it was evident that Martin had not communicated for many years. He had not had many opportunities to make choices or express his views – simply because he was unable to speak. The approach I adopted at the consultation was that he could communicate, and my assumption was rewarded with tiny signals hinting at his desire and ability to communicate, signals that were not always tangible or consistent. I could see it primarily in his eyes, a ‘look’ that expressed his understanding, a light grasp of the hand that indicated a choice, and eventually a smile. Gradually the look, the smile and the light grasp of the hand became more consistent and meaningful.

Years of intervention, primarily coordinated by his parents, followed. First, Martin had to overcome not only his physical disabilities, but years of being invisible imposed on him by an environment that assumed he was incompetent. He also had to overcome the fear of becoming ‘visible’, of claiming personhood, autonomy, choice and a voice after having been denied these for more than a decade. He succeeded gradually and slowly became more competent in using line drawings and his infra-red head pointer to communicate. His abilities improved and later he was able to use text and to use his finger to generate messages on a simple paper-based communication board.

The success with which Martin acquired communication skills and his praiseworthy achievement of writing his autobiography raise the following questions: ‘What facilitated the change in his communication outcomes?’ ‘What made Martin such a competent communicator?’ ‘What can we learn from Martin that has the potential to be replicated?’

Studies have postulated that a variety of factors, including contextual factors, social support, personal characteristics and services offered  as well as the effectiveness, versatility and sustainability of the intervention, can contribute to better outcomes for people who use AAC.

In theory and practice AAC posits that everyone can communicate. The role of AAC strategies in providing an individual with ways of communicating and sharing information, expressing thoughts and needs, and developing relationships is pivotal. Everyone has the right to communicate, convey their convictions about the conditions of their existence, request or refuse objects and events, express personal feelings, make choices, access systems that enable communication, and to be spoken to directly. It cannot be contested that communication is a basic human right and the essence of life.

As far as Martin is concerned it must be emphasised that his parents were there for him and that he had great social support. His parents believed in his abilities and had high expectations for him. Families play an important role in ensuring that a child’s right to communicate is heeded, in demanding accountability in terms of the providing interventions, and in ensuring that their expectations of the child are adjusted continuously. The roles played by Martin’s family, facilitators and knowledgeable professionals who were trained to assist him in his development and communication were pivotal. In Martin’s case, the interventions occurred over an extended period of time, which ensured their sustainability and success.

Finally, Martin’s personal characteristics played an indisputable role in his successful recovery. He persevered patiently and remained dedicated while he learnt how to communicate using AAC. His ability to dream was inspiring. Martin had many different dreams. Initially he dreamed of communicating his needs, wants, preferences, likes and dislikes independently, and then of using his communication skills to develop social closeness and relationships. He dreamed of being more visible and expressing his personality using AAC; he dreamed of being employed, developing his literacy skills, obtaining a degree, finding true love and getting married. He gradually achieved each of these dreams, and now he is dreaming new dreams … 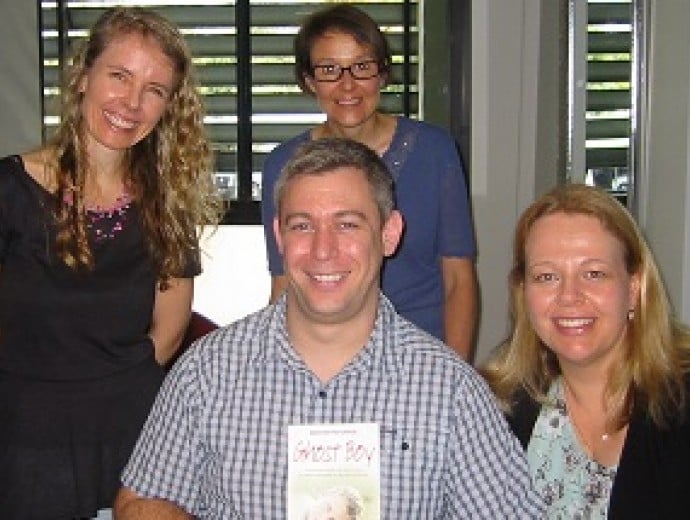