'Tell and be heard'

Violence against individuals with complex communication needs very often remains undisclosed. Unfortunately this unhappy state of events is sustained by various contributing factors such as the fact that the individuals often do not have the means of communication to disclose what happened to them. They find it difficult to access the legal system, have difficulties with legal formalities and also experience problems with giving evidence. A Centre staff project, under the guidance of Prof Juan Bornman, the Director of the Centre for Augmentative and Alternative Communication (CAAC) at the University of Pretoria (UP), has led to the development of multilingual communication boards specifically aimed at helping these individuals to disclose victimization.

Communication boards are devices that typically utilise pictographic symbols, words or phrases, or a combination of all three, which can be displayed either on a cardboard background or on a high-tech device such as an iPad. Individuals using the device can then simply point to the symbol or word that represents what they need to communicate, thereby enabling them to express themselves in a way that is easily understood.

In light of the above, staff at the CAAC developed ‘You can tell and be heard’ communication boards, which are specifically aimed at helping people with complex communication needs to disclose acts of abuse or violence committed against them. To ensure its relevance, the vocabulary on these boards was socially validated by literate individuals who use augmentative and alternative communication (AAC) methods. Three boards, of which two are symbol based – one intended for children and one for adults – and the other is alphabet based, were designed in English and translated using a blind back-translation process. Following the translation process, the text was transferred to the symbols using a custom developed computer program. The symbol-based boards were then returned to the translators for further consideration.

The problem of crimes committed against people with disabilities and the lack of disclosure of these crimes against them are by no means limited to South Africa; rather, it seems to be an international phenomenon. The potential role of the communication boards developed by Prof Bornman and her team has received international recognition and requests for the boards to be translated into multiple languages have been received from countries all over the world.

Some requests for translation presented the team with unique challenges. Languages such as Arabic and Hebrew that use different writing conventions (from right to left, for example) had an impact on the layout of the symbol-based boards. The team encountered similar challenges with the alphabet-based boards owing to the inclusion of special characters in some languages, for example Å in Swedish and β in German. In cases where a completely different alphabet is used, for instance Chinese and Korean, the team had to make additional adaptations. The majority of translators who have worked on the project to date were members of the International Society for Augmentative and Alternative Communication (ISAAC) who volunteered their time.

The boards have already been translated into 26 languages and will be used on the following continents:

The ‘You can tell and be heard’ boards developed at UP have the potential to make a significant contribution to the lives of marginalised individuals across the globe. Prof Bornman and her team at the CAAC are convinced that as the process becomes more streamlined and interest is expressed by other language groups, this ambitious project will continue to go from strength to strength.

The boards developed by the UP team to date are available for download free of charge on www.caac.up.ac.za .

This project is one of three large-scale projects currently pursued by the CAAC. It also forms part of the Faculty of Humanities’ research theme, ‘Enhancing the wellbeing of vulnerable children’. The other projects are a study to identify the legal vocabulary needed by persons with complex communication needs to testify in court by Ms Robyn White (read more about Ms White’s study here) and a study on training relevant service providers (such as police officers) in taking statements from people with significant communication disabilities. 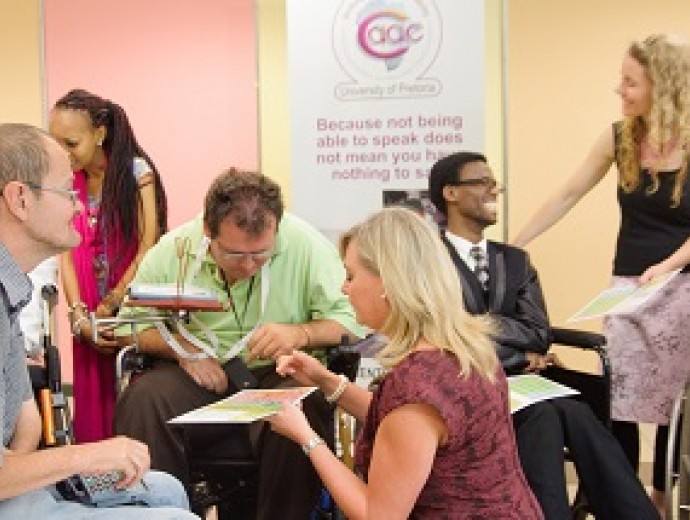