Worldwide, ten filarial helminth species have been recorded from domestic carnivores. In domestic dogs Dirofilaria immitis (canine heartworm), Dirofilaria repens, Acanthocheilonema reconditum and Acanthocheilonema dracunculoides are the most prevalent ones. The domestic cat is acting as a host for D. repens but only as an epidemiologically unimportant host for D. immitis. The Acanthocheilonema species do not feature in cats at all. Filarial helminths typically follow an indirect life cycle with insects acting as vectors (intermediate hosts). The vectors of the Dirofilaria species are culicine and anopheline mosquitoes, fleas are the principal vectors of A. reconditum and the kennel tick and louse flies have been identified as vectors of A. dracunculoides. As the cause of cardiovascular dirofilariosis (heartworm disease) with potentially fatal outcome, Dirofilaria immitis is the most important filarial helminth species of domestic carnivores. Surveys that I have conducted over the last 28 years confirmed that the species is not yet endemic in South Africa, however, it has been reported in imported dogs. Several mosquito species known as vectors for D. immitis are endemic in South Africa. Heartworm is endemic in 16 African countries, including islands, of which one is our neighbouring country, Mozambique, with high prevalences in the northern parts. Cardiovascular dirofilariosis is classified as a controlled animal disease in South Africa. Consulted by the Department of Agriculture, Forestry and Fisheries, I was instrumental in the formulation of regulations for the importation of canines into South Africa to prevent the establishment of the helminth infection. My interest and initial expertise in the field of animal filarioses and human filariasis I obtained during my postgraduate studies at the Liverpool School of Tropical Medicine, University of Liverpool, in the United Kingdom and subsequently while having the unique opportunity serving as a leader of a WHO-funded project, entitled ‘Discovery and development of antifilarial drugs with special emphasis on lymphatic filariasis’ at the International Institute of Parasitology, CAB International in St Albans, United Kingdom. I have conducted several surveys in South Africa and Mozambique to establish the status quo of filariosis in domestic dogs and cats. Our diagnostic services, with many samples received from African countries, have also contributed significantly to shed light on this little studied field of helminthology in the continent.

Currently, our helminthology laboratory is offering three diagnostic tests, namely membrane filtration for the demonstration of microfilariae in blood samples, identification of microfilariae by means of acid phosphatase staining and a serological test for heartworm antigen. The laboratory holds SANAS accreditation for all three tests. We are proud about the fact that we are the only laboratory on the African country and one of only two laboratories (University of Liverpool) in the world that is offering the first two tests mentioned on a routine basis. The heartworm antigen test is mainly offered for export purposes to New Zealand. Positive cross-reactions in D. repens carriers have been noticed. Our SANAS accredited diagnostic tests are accepted and requested by clients from countries of all five continents. 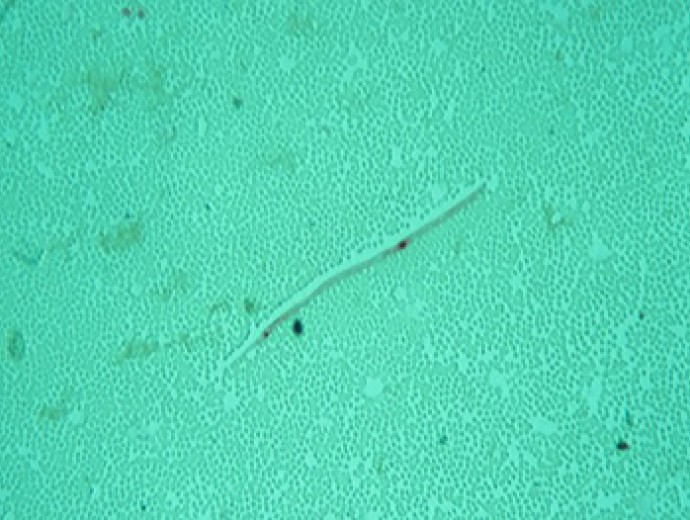