UP tackles rabies in rural areas

Rabies is a fatal viral disease that affects both humans and other mammals, causing inflammation of the brain. The disease spreads when an infected animal scratches or bites another animal or human that has not been vaccinated against the disease. Once an animal gets infected with the virus, the threat of the disease spreading is very high. It is of utmost importance that an area that shares boundaries with wildlife reserves be kept healthy and free of rabies, as part of maintaining an optimal One Health system. Hluvukani Village in Bushbuckridge, Mpumalanga, borders the Kruger national park and, situated at a human-wildlife-domestic animal interface, is a prime example of such a boundary. Contact between livestock and wildlife is common, as they graze on opposite ends of a rickety fence.

Dr Francis Kolo, of the Department of Veterinary Tropical Diseases in the Faculty of Veterinary Science at the University of Pretoria (UP), conducted a study on the demography of the owned, free-roaming dog population of Hluvukani, analysing the mortality and survival rates of adult dogs and puppies in an effort to determine the prevalence, if any, of rabies in the area and the causes of mortality in the population.

Another important component of the study involved informing and educating the community about rabies and the importance of vaccination. The village leaders were instructed on how to safeguard the community and reduce the risk of canine rabies outbreaks. Community members who owned dogs were very co-operative and responsive to the study. UP, SANParks and Mpumalanga's Municipal Veterinary Clinics are involved in a collaborative effort in Hluvukani to ensure dogs in the village are vaccinated regularly against rabies. Veterinary students from the Onderstepoort Campus work at the clinic on a rotational basis during their two-week community service period. Therefore, there are always vet students available to treat animals in the village.

Although the dogs are vaccinated, high rates of population turnover through births and deaths make it difficult to maintain herd immunity. Herd immunity, Dr Kolo explains, is when the majority of dogs are vaccinated against a disease and confer immunity on the other dogs, minimising the chance of an outbreak. 'Even if an outbreak occurs, it will not be devastating because the herd immunity of the dog population will be sustained,' he says. Therefore, the importance of understanding the demographics and the primary reasons for mortality cannot be overemphasised.

In 2011, a Health and Demographic Surveillance System (HDSS) was established to provide the demography of all owned, free-roaming dogs in the village. Identification of dogs using the HDSS was possible via microchips implanted under the dogs' skin and a photo library, which made Dr Kolo's study much easier to conduct and strengthened the relationship between UP and Hluvukani. The study enrolled a cohort of 367 adult dogs and followed them for 12 months. Litters of puppies were also enrolled at birth and followed for 120 days each. Causes of mortality were determined via verbal post-mortem interview with the owners. Thereafter, an autopsy was conducted in the Faculty's Pathology Lab.

Deaths were categorised into natural, non-natural and deliberate. Dr Kolo found there was a far higher death rate among females than males, and among puppies than adult dogs. Most deaths were due to infectious diseases that the dogs had not been vaccinated against, such as canine distemper and parvo viral enteritis. Accidental deaths such as car accidents and deliberate deaths such as poisoning and euthanasia were also recorded.

From Dr Kolo's findings, he was able to determine that the prevalence of canine rabies in Hluvukani is very low, with only one confirmed case during the duration of the project. Not only was this very good news for the community, but it also showed the success of the collaborative project in Hluvukani, proving that the One Health system is yielding good results.

This study comprised Dr Kolo's master's dissertation and he is currently undergoing his doctoral studies at the Department of Veterinary Tropical Diseases in the Faculty of Veterinary Science at the University of Pretoria. 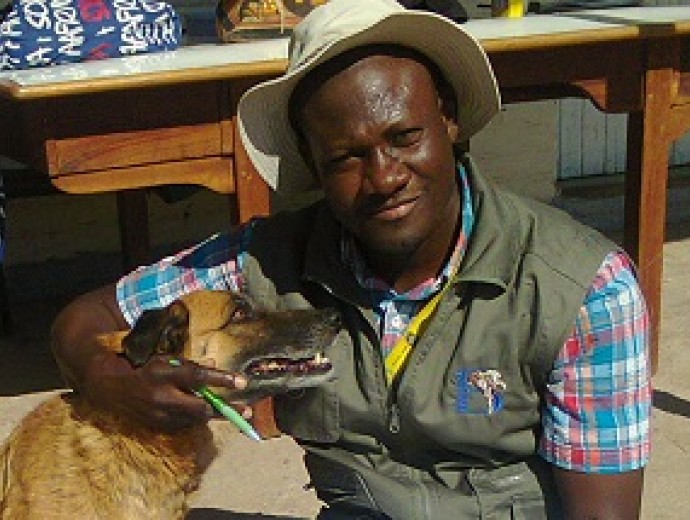 Dr Francis Kolo with one of the dogs at Hluvukani Village