The UP-PUA aims to produce a next generation of leaders who are grounded in their academic disciplines but who can also think across disciplinary boundaries and engage in debates about diverse and contemporary issues. The Academy aims to bridge the link between basic and higher education, as the future of higher education depends on the quality of learners that the basic education sector produces.

"The UP-PUA has been established due to the problems in the basic education system,” said Professor Nthabiseng Ogude, Acting Director of the UP-PUA. “These include the lack of qualified teachers, especially in STEM [Science, Technology, Engineering, and Math] fields, inadequate resources in some schools, as well as large classes and challenges in teaching learners of diverse academic potential. As a result of their mandate to teach learners that may be academically gifted, those that are vocationally gifted, as well as those whose ambition is to enter the world of work, schools cannot adequately address these diverse needs. Consequently, though some learners do qualify for university, many are often under-prepared for university, as their potential is not optimised. This underpreparedness leads to poor throughput at universities.”

UP-PUA followed a multi-stakeholder approach to extend its reach from the initial 500 beneficiaries to 30 000 youth. Initially, via the Mamelodi Campus PUA, learners from 20 schools in Mamelodi and the surrounding areas were given extra help with their schoolwork, and help to prepare them for tertiary studies. "Since the establishment of the Mamelodi Campus Pre-University Academy, PUA has catered to 300 scholars in 2020 and 350 in 2021," Prof Ogude said.

This year the Mamelodi PUA has extended to other campuses and has been rebranded the University of Pretoria Pre-University Academy (UP-PUA). It will thus focus on schools in the broader Tshwane area rather than Mamelodi only.

The ultimate plan is to roll it out nationally, using a hybrid teaching and learning programme, which has an Excellence and a Developmental pivot. The programme for the Excellence pivot is offered to Grade 10 learners on Groenkloof Campus, with some science activities hosted in the Sci-Enza space on the Hatfield Campus. The Mamelodi Campus is home to the Developmental pivot, which focusses on Grade 8 and 9 learners. The curriculum consists of STEAM subjects, namely Mathematics, Chemistry, Physics, Advanced Computer Literacy, Philosophy, Academic Readiness and Support, and Academic and Creative Writing.

The UP-PUA has received many positive responses. "I am glad my child was selected to participate in the UP-PUA,” said Abongile Jacisa, mother of UP-PUA Grade 9 learner Masego Mothica. “I believe my child will receive the necessary skills to enrol for university one day.” Neo Molekoa, also a Grade 9 learner, said he is looking forward to learning computer skills that will one day be to his advantage when he wants to apply to study electrical engineering.

Solly Mahlatjie, father of a learner from Hillview High School in Roseville, Pretoria, said his child, Theresho Mahlatjie, would like to become a medical doctor one day. He believes Theresho will have a better opportunity to access a higher education institution after attending the UP-PUA.

Matsobane Mabusela said he believes the UP-PUA will develop his daughter Thabitha's self-esteem, as she will engage with academics and other successful peers. “I hope it will make her more eager to succeed. She has the vision to become an astronomer.”

It’s hoped that the UP-PUA will in the future expand provincially and then nationally. 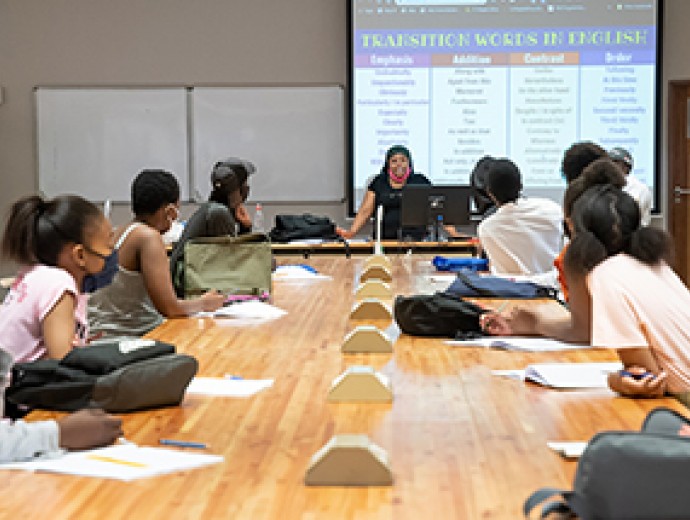