The annual Robot Car Race Day, presented by the Department of Electrical, Electronic and Computer Engineering in the Faculty of Engineering, Built Environment and Information Technology, is a festive event where the Department's third-year students have the opportunity to demonstrate their accumulated skill set after five semesters of engineering studies. The event, now in its fifth year, originated at the end of 2012 as the brainchild of Prof Tania Hanekom, who at that stage had been the lecturer for the third-year Microcontrollers module EMK310 for eight years. She understood that students dreaded the module because of the cognitive step-up required from the second year of study to master the more demanding third-year learning objectives. It was thus decided that the module should be revamped for the 2013 academic year to turn dread into anticipation and excitement. The idea was to create a learning environment that would foster an appreciation for the complexities of the design and implementation of a microcontroller-based engineering system. Engineering students are competitive by nature and the notion of a competition was an appealing approach to capitalise on this characteristic. Thus the Annual Car Race Day was born.

In essence, students design, construct and test an autonomous, line-following robot vehicle, but the snag is that the track consists of a criss-cross pattern of coloured lines. Line-follower robots presented on the Internet invariably follow black on white or white on black lines; therefore, the implication is that students need to develop the system from first principles.  By levelling the playing field through a number of standardised components (for example, the motors), excellence is encouraged, since students have to use their ingenuity to devise strategies that will give their car an edge over those of their competitors. Furthermore, the public nature of the competition exposes students to the reality of deadlines, meeting client demands and taking responsibility for the needs of society. To uphold these ideas, the run-up to the 2017 event explored the role of engineers as superheroes of society, who need to apply their genuine powers to serve humanity through the development of technology and infrastructure.

The first three races were presented in the foyer of the magnificent Engineering 3 building, which houses state-of-the art lecture halls, laboratories and research spaces. However, interest in the event sky-rocketed and it had to be moved out to the amphitheatre in 2016 to allow more spectators to attend. Industry also became an integral part of the Race, with a number of local and international companies backing the effort by donating prizes and providing financial support to host the event. These companies include Microchip, RS Components, Gendac, Keystone Solutions, GEW, MWR, Microrobotics, Suntoy and Pearson.

The students immediately bought into the project and have been creating extraordinary vehicles of varying complexity and creative design, to the delight of themselves and thousands of parents, learners, industry delegations, academic staff and other interested parties who have attended the event. This year promises not to disappoint, with a revamped gantry system and a slightly adapted track to offer a spectacle second to none.

According to Prof Hanekom, the success of the event can be attributed to an excellent team of assistant lecturers and tutors for the module, unwavering support from the Department and Faculty, and most of all, the tireless enthusiasm of the laboratory instructor for the module, Mr Willem van Jaarsveld.

Teachers, learners and parents are invited to join us between 14:00 and 15:00 on Friday, 26 May 2017, for a guided tour of our facilities, a briefing on the technical details of the robot cars and an introduction to our innovative teaching and learning strategies. The main event will take place in the Amphitheatre on the Hatfield Campus at 16:00. 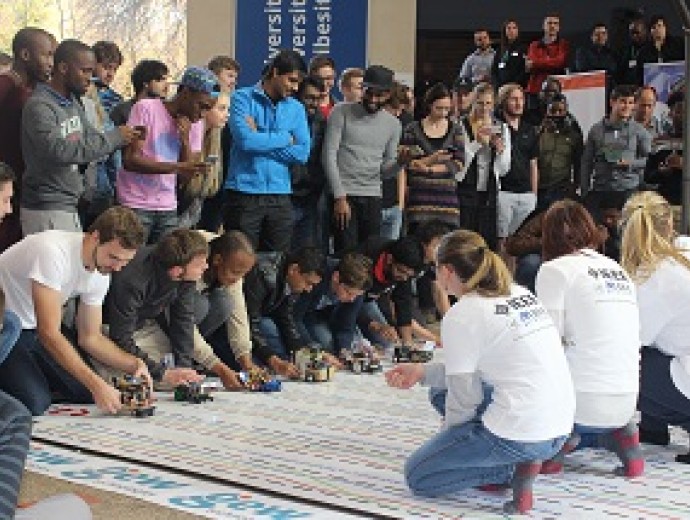