Drs Miemsie Steyn and Melanie Moen from the Faculty of Education at UP, undertook an Early Childhood Education study of young children aged between six and nine years in order to identify predominant themes prevailing in the early school-going phase.

South Africa may be known as the Rainbow Nation, but not all the colours in this rainbow are bright and beautiful. South Africa is one of the most violent countries in the world and the results of a recent study show that with regard to violent incidents at schools, it is ranked second in the world. Violence and the large numbers of people infected with HIV/Aids contribute to the social adversities South African children have to deal with. Schools are a microcosm of a broader society, and the effects of these social adversities can be troubling if left unaddressed.

Drs Miemsie Steyn and Melanie Moen from the Faculty of Education at the University of Pretoria (UP) recently undertook an Early Childhood Education (ECE) study of young children aged between six and nine years in order to identify predominant themes prevailing in the early school-going phase. The main aim of the study was to identify negative themes and to ensure that such themes are appropriately and effectively addressed by the teacher training curricula at institutions of higher education. 'Student teachers should be equipped to assist young children in debriefing and the processing of disturbing events so as to enable them to ‘bounce back' to normal life,' Dr Steyn explained. The study included 224 children and the two predominant themes that surfaced were violence (mainly relating to bullying) and loss.

Fundamental to the role of the teacher is the establishment of a safe, secure environment for children, particularly because of the current decreased involvement of parents. The pastoral role of teachers is therefore becoming increasingly important. During their research, it became evident to Drs Moen and Steyn that, in addition to academic knowledge enrichment, children in the ECE phase must also be equipped with non-academic knowledge and the skills that will be required to successfully live in today's society and to cope with and overcome challenges.

This UP study was one of the first studies to focus on the experiences of South African children in an attempt to determine the root causes of emotional distress.

A total of 30 private and government schools in Gauteng were randomly selected for participation in the study, which involved ECE teachers (who are also BEd Honours students in UP's Faculty of Education). The teachers were asked to request the learners in their classes to draw pictures of things that make them sad. Since young children are often unable to express their emotions adequately, drawing provides a safe vehicle for revealing emotions that they cannot express in words. Teachers then discussed the drawings with the children to ensure that correct interpretations were made. Even though the schools involved varied with regard to culture, language and socio-economic background, the two themes of violence and loss dominated in the findings.

A significant number of children drew pictures depicting physical and verbal abuse, mostly perpetrated by other children. Verbal and physical abuse by friends and family members were also noted. 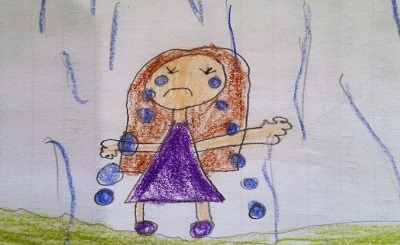 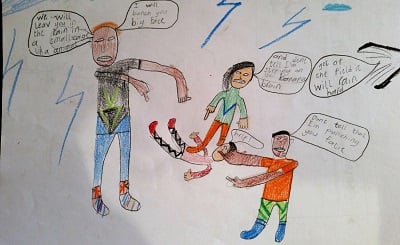 Violence was typically displayed in the form of bullying. Boys tend to engage more in physical aggression, while girls engage in exclusion, gossiping, ending of friendships, teasing and spreading rumours. A strong correlation was found between bullying and negative parental behaviour. Drs Moen and Steyn suggest that 'peer victimisation is associated with inconsistent, punitive, hostile and/or abusive parenting, high negative expressiveness, or high levels of family conflict or violence'.

Research shows that exposure to violence can have psychosocial and health consequences, which could have lasting detrimental effects on the development of children and increase their risk of becoming violent and antisocial. Victims of bullying typically show signs of anxiety, depression, low self-esteem, stress and social marginalisation.

Loss was another prevailing theme, with children depicting the loss of a parent, sibling, grandparent or family member, which is a reflection of the high levels of violence and HIV/Aids that are prevalent in South Africa. The effects of loss on young children can include feelings of inferiority, intense fear and feelings of helplessness.

According to Drs Moen and Steyn, the findings of this research emphasise the importance of addressing the issues of violence and loss in the teacher training curricula at institutions of higher education. It is imperative that student teachers be made aware of the factors that affect children's emotional well-being while simultaneously equipping them with the skills and knowledge needed to support children in dealing with these adversities in a school situation before the problem escalates and the psychological damage becomes irreversible.

As a result of the findings of this study, UP's Faculty of Education has already incorporated specific sections on addressing the issues of violence and loss into its Life Skills Education curriculum. Furthermore, it intends to develop training material for other institutions of higher education throughout South Africa. 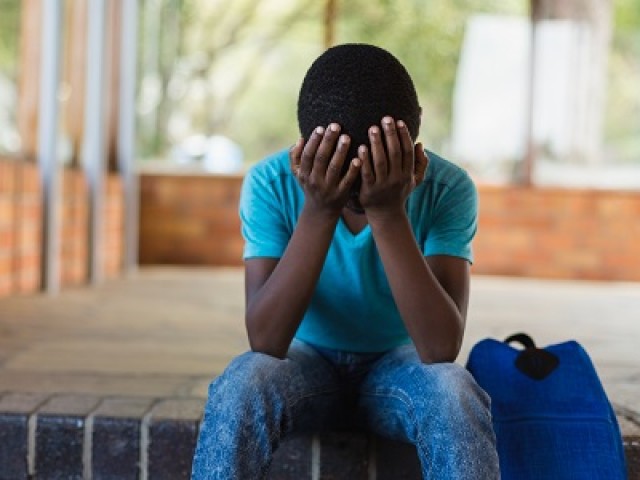