Tourism Minister Derek Hanekom visited the University of Pretoria recently for a preview of the Javett-UP as construction of this new home for African art at the university’s Hatfield Campus nears completion. Hanekom was hosted during his visit by UP Vice-Chancellor and Principal Professor Tawana Kupe.

The pair was joined by the university’s executive management team which, along with Director Christopher Till, guided Hanekom through a detailed presentation about the centre and progress made toward completing construction ahead of its launch later this year. Their talks included details of Javett-UP’s long-term strategy based on the premise to focus on the art of Africa.

Kupe said the university is driving home the message among the academic stakeholders and the fraternity that “culture and heritage can create jobs and end poverty. South Africa needs to value the arts, because through the preservation of art and the promotion of arts, heritage and cultural tourism, South Africa has the potential to become a major cultural tourism destination”.

Javett-UP presents a powerful platform for transdisciplinary exchange and will be working closely with other local and international institutions. Once completed, the centre will help boost art and cultural tourism to South Africa.

Hanekom said, “This centre is critical to the arts, history and cultural conservation efforts in this country, and the University of Pretoria has been a key partner and key stakeholder in the restoration of culture and heritage.”

He thanked his hosts for their hospitality and underlined the close relations between the academic fraternity, the arts and tourism. He spoke of the need for cooperation between all stakeholders in the sector toward the creation of a single-minded tourism approach.

Kupe thanked the Minister for the visit, and for taking a close look at the University of Pretoria’s work in the cultural sector. They spoke about their willingness to work together, and stressed their quest to further enhance the relationship between tourism and the arts. 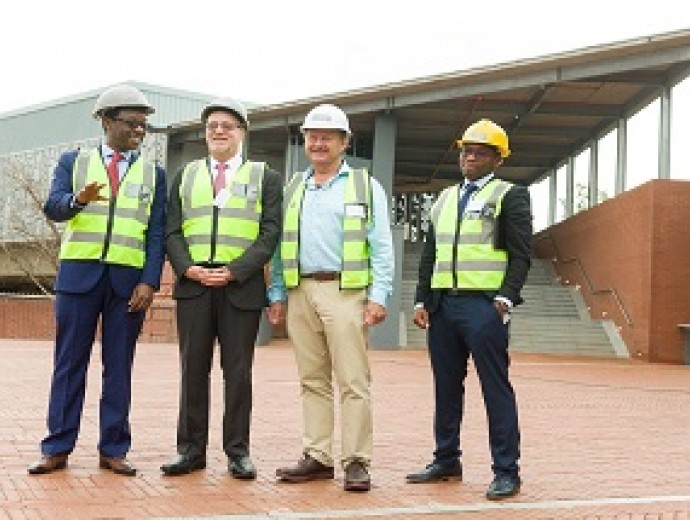