Two crashed planes, 109 flying hours and 45 days. This is what it took Lieutenant Colonel Pierre van Ryneveld and Captain Quentin Brand to write history by completing the first flight from London to Cape Town on 19 March 1920.

It has been 100 years since this massive feat was achieved by the two pilots, and to commemorate this historic event the University of Pretoria’s (UP) Faculty of Engineering, Built Environment and Information Technology (EBIT) held a celebration on 14 March 2020 at its brand new Engineering 4.0 building, at UP’s Hillcrest Campus. The significance of hosting the commemoration at the Engineering 4.0 facility is that the first landing point in South Africa of the London-to-Cape Town flight route was where the facility now stands.

The celebration coincided with the re-installation of a monument at the site; the monument was relocated last year when construction began on the Engineering 4.0 building. EBIT Dean Professor Sunil Maharaj said UP is proud to be an inextricable part of South Africa’s aviation history. “Technological advancement has gotten to a point where travelling from London to South Africa is as easy as taking a flight that’s approximately 12 hours long. One hundred years ago, this was not the case. So it is important for us to commemorate this event, because it helps us take stock of how far we’ve come,” Prof Maharaj said.

After the technological advances made in World War I, international flight came onto the map in a big way. In London, The Times of London launched a competition to see who could successfully complete the trip from London to Cape Town, with a £5 000 purse (approximately £225 000 or R 4.7 million today), and less than a month later a British team in a Vickers Vimy (a British heavy bomber aircraft) set out from England for the Cape. It was piloted by captains S Cockerell and FC Broome, and included Dr Chalmers Mitchell, Secretary of the Zoological Society.

It is believed that then South African Prime Minister Jan Smuts wanted a South African to be the first to complete the challenge, so he authorised the purchase of a Vickers Vimy at a cost of £4 500. On 4 February 1920 Lieutenant-Colonel Pierre van Ryneveld and Captain Quintin Brand took off from Brooklands Aerodrome in Surrey in a Vimy named Silver Queen.

Less than two months later, the South African team made history, and the site where the first landing in South Africa was made was marked as a heritage site some years later (after the other three teams crashed out along the route).

Professor Wynand Steyn, Head of the Department of Civil Engineering at UP, said it was important that the event is commemorated and the landing is site restored, because they are reminders of the technological advances that have been made over the past century. Aviation enthusiasts gathered to commemorate the event with UP.

“It was a mere 100 years ago that the first plane landed from the UK in South Africa,” Prof Steyn said. “We often take existing technology for granted. I believe that the visibility of the memorial will make us remember that apparently impossible feats become possible when good people put their minds to it, and become common-place once we understand the issue or challenge or technology better. That is why we do engineering, for the benefit of humanity.”

He added that the new Engineering 4.0 complex would endeavour to continue making breakthroughs that help humanity live better.

“For many people in Africa, travelling to their nearest shopping centre, school, police station, hospital or market is a similar challenge to what travelling from the UK to South Africa was 100 years ago. A challenge over non-existing and bad routes, through rivers without bridges, with a real danger of not arriving. We have the opportunity to change this through continuous improvements in our understanding, development and supply of road and transportation technology. This will improve people's lives, which is the focus of any competent engineer's career,” Prof Steyn said. 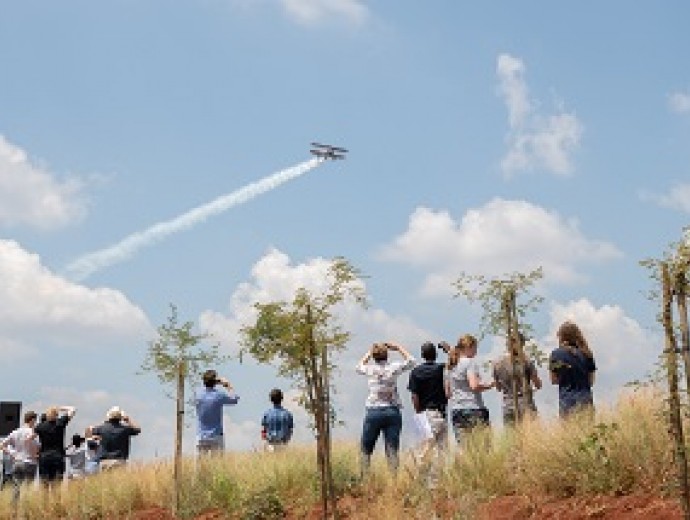