Seven University of Pretoria (UP) academics received prestigious awards from the National Research Foundation (NRF) on Thursday, 12 September 2019, for their contribution to knowledge creation and dissemination.

The NRF is a government-mandated research and science development agency that funds research, the development of high-end human resources and critical research infrastructure to promote knowledge production across all disciplinary fields.

Prof Tshifularo, Head of UP’s Department of Otorhinolaryngology in the Faculty of Health Sciences, was awarded the Hamilton Naki Award. Named after the self-taught surgeon who trained generations of medical students in surgical techniques, this award honours individuals for achieving world-class research performance despite considerable challenges.

He said he was “very honoured and humbled” by the award as it meant that the work of researchers was being paid attention to. “With the money, I am planning to pay for my research clinical trials and patent fee. And as a researcher, it is very exciting and a privilege to search for knowledge and information.” Prof Moja, Visiting Research Fellow at UP’s Centre for the Advancement of Scholarship, received the Lifetime Achiever Award. This accolade is awarded to individuals considered to have made extraordinary contributions, of international standard and impact, to the development of science in and for South Africa over an extended period of time.  An additional consideration is the manner in which their work has touched and shaped the lives and views of South Africans.

Prof Moja has made immense contributions to policy work in higher education. She was part of a team that re-wrote the policies for the transformation of higher education in the country, then under former Education Minister Sibusiso Bengu, starting with work completed as activities in academia, then joining the Centre for Education Policy Development, and becoming the Commissioner and Executive Director of the National Commission on Education.

She said: “This award symbolically represents the formalisation of a new identity that has been created over a lifetime, hence a Lifetime Achiever Award. This has been achieved with the support, mentoring and womentoring of colleagues, who are also achievers recognised in other settings.”

Ratings-linked awards are given to scientists who have qualified for an A or P rating, as evaluated through the peer review-based NRF rating system.  A-rated researchers are unequivocally recognised by their peers as leading international scholars in their respective fields for the high quality and impact of recent research outputs.

Prof Cowan, Director of the Genomics Research Institute and of the Centre for Microbial Ecology and Genomics, was recognised for his A1 rating based on his work on a series of investigations of the microbiomics of desert ecosystems: the frozen deserts of the Antarctic continent and the hot deserts of western Namibia. The microorganisms living in these two very different, but in some ways similar, habitats are near the thermal limits of life. He said: “I am delighted and honoured to have been recognised by the NRF for the research I have done over the past decade in fields for which I remain passionately enthusiastic.”

Prof Wingfield was awarded for the renewal of his A1 rating. He is founding director of UP’s Forestry And Biotechnology Institute (FABI) and his research interests are focused on the broad area of forest health, particularly regarding insect pests and pathogens of trees, and their patterns of global movement.

Receiving an award for his A2 rating in mathematics is a way of repaying UP for investing in him, said Prof Raftery. “When I joined UP in 2013, the university temporarily created a position for me, rather than waiting for a retirement vacancy in my department. I am grateful to be able to repay that investment in a way that brings recognition to the University,” he said. His research focuses on algebra, logic and the interface between them and entails using algebraic methods to solve problems concerning deductive systems.

A P rating is assigned to researchers (normally under 35 years of age) who have held a doctorate or equivalent qualification for less than five years at the time of application. These researchers are considered likely to become future international leaders in their respective fields on the basis of exceptional potential demonstrated in research performance and output during doctoral and/or early postdoctoral careers.

Five scientists from four universities were awarded for their P ratings on the night, two are from UP.

Prof Mizrachi received an award for his P rating. He is an Associate Professor in the Department of Biochemistry, Genetics and Microbiology, and works as part of the Forest Molecular Genetics Programme at FABI. His research focuses on understanding the development of wood, particularly how carbon is managed in cells during wood formation in trees, to produce biopolymers that are of great ecological and economic importance.

He said: “I feel immensely proud and privileged to be recognised in this manner. Doing high-impact research is a result of strong collaborations with excellent scientists, and the effort of many emerging postgraduate students. It is also a testament to the productivity that is possible in basic and applied research when strong partnerships are established between industry, government and academia. I also want to recognise the department of BGM (Biochemistry, Genetics and Microbiology), FABI and Future Africa at UP for providing a world-class research and engagement environment to grow.”

Prof Visagie, also from FABI, was recognised for his P rating. The mycologist specialises in the taxonomy of Aspergillus, Penicillium, Talaromyces and other types of mould from the natural and built environment. His research focus includes their biodiversity, ecology, phylogenetics, nomenclature and identification with a particular interest in taxonomically robust ecological and biodiversity studies.

UP Vice-Chancellor and Principal Professor Tawana Kupe, who attended the event, congratulated the award winners. “I am extremely proud of our researchers who are highly productive and produce research that changes lives and transforms society. At UP we strive to produce cutting-edge research that matters,” he said. 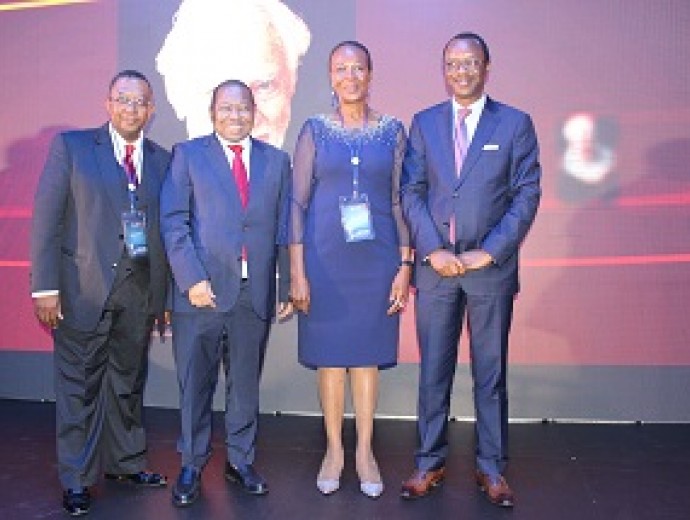