Ninety years is a long time in any company, and even more so in an academic department. The question is not only how old a department is, but could it have withstood the test of time in terms of academic quality and relevance.

Prof Cheryl de la Rey, Vice-Chancellor and Principal of the University of Pretoria, keynote speaker at the official unveiling of the newly renovated food laboratories and 90th year anniversary celebrations of the Department of Consumer Science on Tuesday, 18 April 2017, confirmed and reiterated that this Department did so and even excelled.

Prof De La Rey congratulated the Department on its tireless commitment to the University's vision of being a research-intensive university by increasing its NRF ratings and research outputs as just two examples of its achievements.

The Dean of the Faculty of Natural and Agricultural Sciences, Prof Jean Lubuma also shared his pride in the Department's success and celebrations and explained that the 90th anniversary is indeed worthy of celebration as it is a *'polite number'. The  date of the event being 18 April is also a 'polite number' and increases the significance of the celebration.

'The only certainty in life is change and change is indeed part of the DNA of this Department. The Department is yet again going through some changes as it will merge with the Department of Food Science later this year. Furthermore this Department is also the largest and oldest of its kind in the country,' Prof De la Rey added.

Apart from celebrating nine decades of achievements, the refurbished food laboratories were also unveiled during this event. According to Prof Alet Erasmus, Head of the Department (HoD) of Consumer Science, 'the redesigned facilities have improved the training potential of the Department to match and even exceed the level of quality set by industry. The training capacity of the Foods Division of the Department has increased from 30 students in the two training laboratories to 56 students, where each student now has his/her own work station and does not have to share space as in the past. The experimental research laboratory is multi-functional and provides space for consumer scientists as well as food scientists to work side-by-side doing consumer-led product development.  Over a period of time this facility could establish itself as a world class facility in the field of culinary science, expanding ties with partners in industry with whom they already closely liaise.'

Two previous heads of the Department, Prof Elizabeth Boshoff (1979 to 1999) and Prof Elmarie de Klerk (2000 to 2014) were also guests of honour at this prestigious event.

The University of Pretoria provided R15 million for the project. In addition the Department also received substantial donations from suppliers such as Culinary Equipment Company (R500 000 worth of industrial food preparation equipment), DeLonghi (various small appliances such as mixers and food processors to the value of R300 000), MacBrothers (a generous discount on all large cooling equipment) and McCater (a donation towards the stainless steel construction of the demonstration station). Contributions of Miele and Whirlpool were also acknowledged.

While the guests visited the laboratories to appreciate the impressive design and novel technologies, food that was prepared and served by students of the Department, refreshed guests' memories of changes in cuisine since the 1920's. 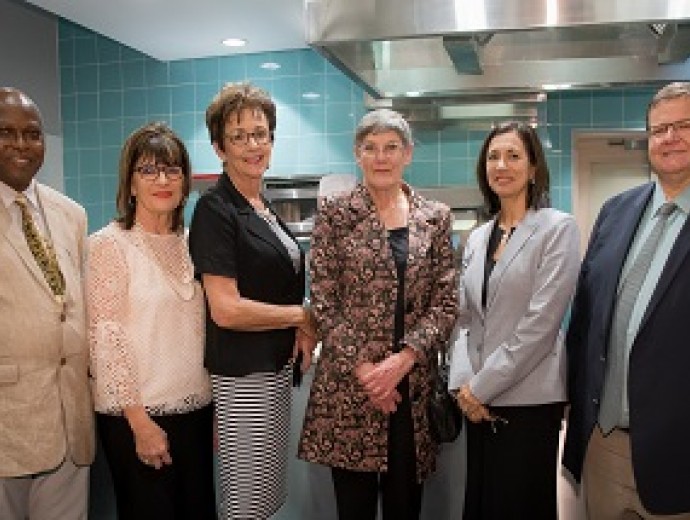