When Kemisetso Baloyi of Delta Drone TuksWomensRugby Sevens, walks down the street, few would guess that rugby is her game and that she will represent South Africa at the Birmingham 2022 Commonwealth Games at the end of July as a sevens rugby international player.

The Tuks sevens rugby player's slight build definitely belies her prowess on the rugby pitch; she looks as if she might be more at home sprinting down an athletics track. But rugby is her passion. She has been playing since age 15. It could be said she got hooked the very first time she touched the ball. Not even breaking her nose during a training session quelled her love for the game. Every time she steps onto the field, only one thing matters: giving 100%, putting her body on the line. She expects no less from her teammates. Needless to say, she has captained Tuks to win the inaugural Varsity Women's Sevens Tournament in 2019. Last month leading from the front, as has become the norm, she helped the Delta Drone Tuks team win the 2022 Centrales Sevens tournament in France.

This attitude led to her being selected for the Springbok Women’s Sevens squad, which will compete at the 2022 Commonwealth Games in England.

Asked what she considers her best qualities as a player, Baloyi said, "I am not the fastest player. That is why I prefer playing hooker. Any team needs to have forwards that can stay with the ball. That I can do."

Baloyi tends to be a bit too modest about her skills. She has scored her fair share of tries playing for Delta Drone TuksWomensRugby Sevens. But she is not counting as she reasons scoring tries does not always boil down to being talented.

"When I get the ball in hand, it is often more about survival. I don't want to be tackled, so I must be innovative. Having the ability to side-step certainly helps."

For Baloyi, some of the most rewarding moments are often when she gets to execute match-saving tackles.

According to the Tuks player, it was by chance that she got to play rugby. She grew up in Soshanguve. The options for young girls wanting to be active were limited.

"It was sort of netball or nothing. A friend told me she was playing rugby. I got interested, so she suggested that I should come with her to the Komuso Youth Rugby Club. I immediately enjoyed playing rugby. But I have to admit I nearly quit when I played my first game as I got scared. Luckily for me, I decided to stick out. I have never regretted it." 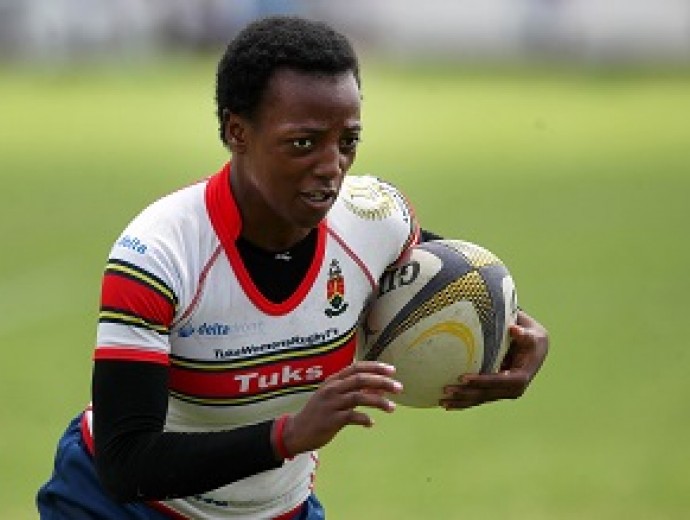