Meet the De Villiers, a family of UP graduates

Dr Ronel de Villiers, a senior lecturer in Music Education at the University of Pretoria (UP), is the proud mother of two recent UP graduates.

Prior to being a lecturer at UP, Dr De Villiers, who received a PhD in Music Education from the University in 2018, was a schoolteacher for 30 years and emphasised the importance of education in the De Villiers household.

“I introduced my children to home-schooling curricula when they were only three years old,” she says. “They played educational games and sang various songs when learning new things. I also instilled a love of reading in my children, assisted them with assignments, and helped them prepare for tests and exams throughout their schooling. My husband and I always aimed to frame education as something fun.”

She adds that hers is a close-knit family, and that they encourage one another when it comes to difficult tasks.

“I always offer my two cents during these challenging times by reiterating to my kids that they have too many brain cells to fail and that when it comes to significant tasks, they need to ‘eat an elephant piece by piece’.”

“Regardless of the challenges I faced, I never lost hope and I succeeded in the end,” he recalls. “This is evident in that I finished my degree in the designated four years in addition to being recognised by the Golden Key International Honorary Society for my achievements in the completion of my honours degree.”

As to why he decided to study at UP, Dion said: “I scrutinised the top universities in South Africa, and UP came out tops as the best for engineering. Additionally, both my parents studied at UP, so it was an easy and obvious choice.”

Dion is working at an engineering consultancy company while completing his master’s part-time. He advises students not to be afraid of failure, as it is the best teacher.

“When you fail, don’t throw in the towel; try to reflect, analyse and improve your thinking. Learning is just repetition in various forms. If you continue, eventually you will succeed. I realised that nothing is impossible and that it is never too late to start over.”

Anel encapsulates the spirit of “nothing is impossible” as she was awarded academic honorary colours and completed every module over the course of the four-year duration, each with a distinction. Her outstanding academic journey was recognised by the Golden Key International Honorary Society in her second year of study. She also received the Top Achiever Award from the South African Association of Family Ecology and Consumer Science as the best final-year student in the Consumer Science programme, and was listed on the Dean’s Merit List of Exceptional Academic Achievers.

Despite these exceptional achievements, Anel’s journey was also not without its trials. Her biggest challenge while studying was time management.

“During the duration of my studies, I juggled both university tasks and part-time work as required by one of our modules, where we were expected to complete 480 hours of industry-related employment.”

Anel advises students to adopt a teachable spirit and have the ability to bounce back. She also places emphasis on finding a healthy balance between studies and a personal life. 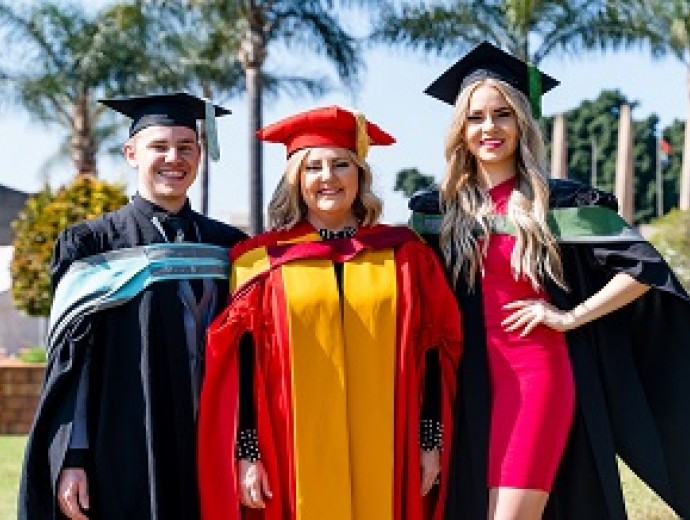