“‘Don't worry, you can do it, you’ve just got to believe it.’ These few words can change a life.”

“I dedicate my medals to the people of South Africa.” These are the words of Tuks-based athlete Ntando Mahlangu, who won two gold medals at the Tokyo Paralympic Games in Japan. “It was a dream come true,” he says; however, he adds that his medals were not his alone.

“Hopefully it will bring a bit of positivity to the people of South Africa. Personally, it is important to me to remain humble.”

Cathy Landsberg, who coaches Mahlangu, had predicted that the Tuks-based athlete would win the 200 metres. Her confidence partly sprouted from the fact that Mahlangu had set a world record in April, running 22.94s. But it was not only his “raw speed” that excited her.

“Amazing” is the word Landsberg uses when asked what it’s like to coach Mahlangu. “Ntando is one of the most disciplined and dedicated athletes I have ever worked with. It does not matter how tired he is. He is always willing to do more, and he always gives 100%,” says Landsberg, who has been coaching Mahlangu since he was 13.

She is the one who guided him to win his first Paralympic medal when he was only 14. Mahlangu finished second in the 200 metres during the Rio Games. Then, two years ago, he won his first world title.

Landsberg is possibly the coach who best understands what it takes for Mahlangu to perform at his best as she is an amputee herself. When she was 26, she worked at stables in Switzerland. One day she went for a horse ride. “I was not a very good rider at the time. It led to me taking a tumble. I managed to land on both legs, but still, my right leg broke on impact. Unfortunately, due to medical negligence, gangrene set in. It led to my right leg being amputated below the knee.”

“It has helped me to have a better understanding of what the needs of Paralympian athletes are,” says Landsberg, who has gone on to represent South Africa at para-equestrian events.

Mahlangu’s performances are truly inspiring, considering that for the first ten years of his life, he was in a wheelchair due to hemimelia, a condition which stopped his legs from developing under the knee.

His life changed in 2012 when Jumping Kids, a charity that helps children with disabilities in South Africa, offered to assist him with prosthetics to walk.

“When I got this opportunity, I decided to make the most of it,” says the athlete.

Mahlangu says his role models are the senior athletes of the 2016 Paralympic team.

“I was only 14 and did not know anything. Guys like Charl du Toit, Mpumelelo Mhlongo and Arnu Fourie took me under their wings and guided me. I will be forever grateful for what they did. The time will come when I will be the senior athlete and hopefully a role model.”

Mahlangu emphasises that he is also grateful for family members and friends who always encourage him to believe in his abilities.

“I don’t think people realise what it means when you have a disability, and you are being told ‘don't worry, you can do it, you’ve just got to believe it’. These few words can change a life.” 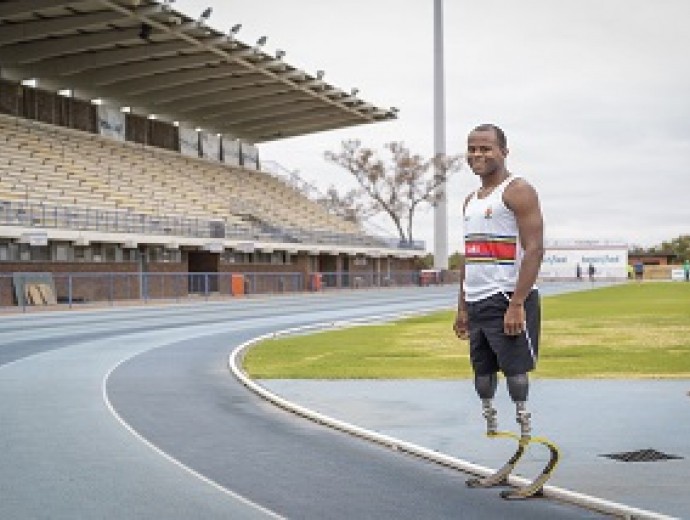