Diligence is the mother of success

Diligence is the mother of success

“My years at the University of Pretoria were the most challenging, yet rewarding, as the institution was transitioning into a parallel medium institution with the introduction of English in 1993/94,” said Honey Mamabolo, a UP alumna with a BEng-degree in Chemical Engineering.

“I studied for a Bachelor of Engineering degree in Chemical [Engineering] and qualified in November 2000. I graduated March 2001, however, my parents had wanted me to study MBChB (Medicine) at an English-medium institution. Not only were my parents concerned about my going to a historically Afrikaans institution, they were worried about my choice of a degree that is considered one of the most difficult degrees at tertiary level. My persistence paid off as my parents finally agreed to let me study at a university of my choice.”

Mamabolo says transitioning from high school to tertiary was not easy as she once scored zero percent for her first-ever chemistry semester test (major subject), a subject that she obtained 98% in matric. However, she knew she had to seek help and tutoring from her peers, and thanks to her confidence it paid off. “Putting in the long hours and hard work saw me getting a distinction for my final year thesis and maintaining distinctions for mathematics from first to third year, even though my matric maths was an ‘E’ symbol and I was told I could never study engineering. After spending a year of bridging and improving my mathematics, I got a distinction which enabled me entry into the Faculty of Engineering” she said.

On 1 February 2020, Mamabolo will be joining the South African Mint Company in its 128th year, a wholly owned subsidiary of the South African Reserve Bank as the Managing Director. Prior to that she served at Nedbank as a graduate trainee focusing on the streamlining of business processes and automation. She worked in retail banking for seven years, with her last role as a Project Manager for Absa. She then took a short sabbatical and went to Ghana and formed a non-profit organisation with Liberian refugees in Ghana, called Vision Awake Africa for Development, an education-based organisation. She also spent four years as a Director of Operations at a niche energy consulting firm Energy Solutions Africa, focusing on energy advisory, policy implementation and donor fund management. This set her up for a role at the Industrial Development Corporation as Green Industry Specialist in charge of two clean energy funds valued at R1 billion. Mamabolo also participated in corporate and project financing of energy efficiency and renewable energy projects. For the past five years until December 2019 she served as CEO of Thebe Unico, a leading manufacturer of automotive chemicals and a subsidiary of Thebe Investment Corporation.

“UP's supportive lecturers and commitment to excellence gave me good grounding. Having commercial subjects in our engineering course set me up for a long career in banking and finance. The diversity of cultures also allowed me to engage with other students, learn tolerance and mostly embrace diversity,” she said.

Mamabolo’s mom, Dr Nthabiseng Thobela-Mailwane, graduated with a Doctor of Philosophy degree (PhD) in Early Childhood Education in 2016 at UP, at the age of 60. She says she has always had a passion and compassion for children experiencing some form of disability as it adversely affects their ability or limits their opportunities to learn. Having conducted her PhD around the field of disability in young children of pre-school going age, she was motivated to start a non-profit organisation whose main objective is to highlight the importance of development in the early years of children, including young children with disabilities.

She says prior to studying for her PhD, in the late 2000, after thoroughly reading information that the UP’s Department of Speech-Language Pathology and Audiology sent her, she then developed an interest in the study courses the department was offering, particularly those focusing on disabilities and decided to apply for enrolment in the PhD programme.

“I went through the selection process and was eventually admitted to the Doctoral Preparatory Programme in the Department of Speech-Language Pathology and Audiology in 2011. However, after submitting my research proposal at the end of that year, Prof. Juan Bornman recommended that I enrol for the PhD programme in the Department of Early Childhood Education in 2012, as my research topic was more relevant to that department,” she said. Her PhD thesis was titled ‘Ecosystemic factors influencing the accessibility of Early Childhood Development Services for young children with disabilities’. 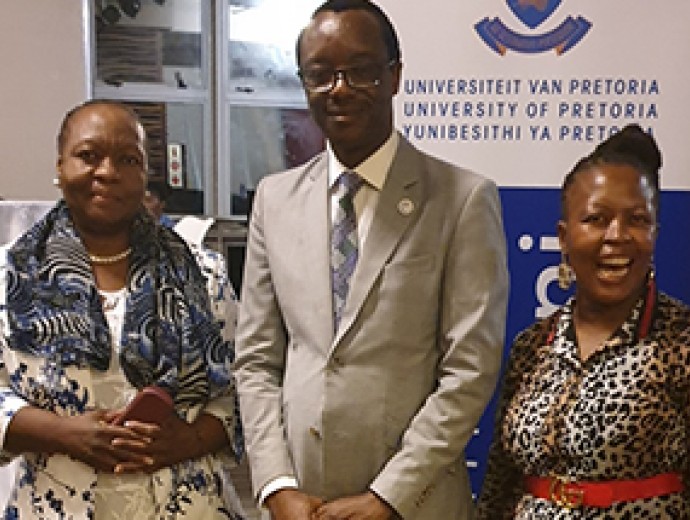