‘I am a proud Tukkie’ – Meet UP’s new President of the Convocation, Dr Hinner Köster

Animal nutritionist and businessman Dr Hinner Köster, the newly-elected President of the Convocation of the University of Pretoria (UP), wants to strengthen alumni structures at the University so that they become fully inclusive and work together under one umbrella for one common goal.

“UP has made a significant contribution to the success of the careers of many of its alumni, and therefore I want the University to continue to be globally recognised and maintain its high standards,” Dr Köster said.

The Convocation of UP is a legally constituted body that includes 300 000 alumni, members of UP’s Executive, current permanent academic staff, Professors emeriti and other retired academic employees. The President of the Convocation plays a pivotal role as Chairperson of the Convocation Advisory Board (ex officio), and as one of the four Convocation members on Council, the University’s highest decision-making body. Dr Hinner Köster has served, and still serves, on many boards as director or chairperson, and has received numerous industry and academic awards for his contribution in various agriculture sectors.

Dr Köster, whose term runs until October 2024, has been Chairman of the Alumni Board since 2014 and believes it is imperative for alumni to give back to UP. He intends setting up formal alumni structures and committees that represent sport, culture, business professionals and academics, under which alumni can provide support and input. “In many developed countries alumni contribute large amounts of money towards their alma mater. In South Africa this is not the case, and even more need for alumni support exists as government subsidies to universities have been steadily declining.”

Besides direct assistance towards bursaries or research projects, indirect support through mentorship programmes, opportunities for internships and guest lectures are all ways of making significant contributions to allow UP to maintain its highly rated status in the global educational environment.

Dr Köster, an Animal Science alumnus, graduated with a B.Sc. Agric., B.Sc. Agric. (Honours) and a M.Sc. Agric in Animal Nutrition. He then went on to graduate with a PhD at Kansas State University, USA, where he still is an adjunct faculty professor, and where he also served as President of the Graduate Student Association. During his professional career he served, and still serves, on many boards as director or chairperson, and has received numerous industry and academic awards for his contribution in various agriculture sectors. Over the years, he has epitomised how alumni should contribute to their universities, and proudly states that “UP’s Faculty of Agriculture is by far the best in South Africa. Therefore, the majority of people we employ are UP graduates, as we give preference to UP students. Most of my family attended UP, including my mother, Heide, who also was an athlete in the early-1960s Tuks Dalrymple team.”

As a major shareholder and Executive Director of Kaonne Investments, which has five subsidiary companies in the animal nutrition value chain, as well as Director and past Chairman of the SA Animal Feed Manufacturing Association (AFMA), Dr Köster is instrumental in sourcing local and international funding from companies for research and other projects in animal science at UP. His company also sponsors prizes for special academic achievements and student events, and provides bursaries and internship opportunities for students.

He is a guest lecturer and external examiner at UP and other universities, and is also involved in postgraduate studies via advisory panels, or as a collaborator. He has published over 600 scientific and popular press papers, and has given delivered more than 600 presentations worldwide. A familiar face on UP campuses, he attends intervarsity sports activities and is on the management committee of the TuksRugby Supporters Club, which raises money to support UP rugby players.

Dr Köster has linked UP with industry and, in 2018, as a Board member of AFMA, he was instrumental in the signing of a historic Memorandum of Agreement between UP and AFMA, to the value of R50 million, for the establishment of an international animal feed mill research facility and laboratory at UP’s Agricultural Experimental Farm. This facility will provide access to specialised on-site product development facilities, as well as training and practical experience for students, AFMA members, and local and international animal feed nutritionists and feed manufacturers.

Things have changed in Animal Science since Dr Köster’s time at UP. “When I was a student there were only two female students in my class. My brother Heiko, also an Animal Science graduate, is married to one of them, Professor Esté van Marle-Köster, who is now UP’s Head of the Department of Animal and Wildlife Sciences. Nowadays there are more female students than males,” he said.   Animal Science is not just about farming, but has become a highly sophisticated and dynamic profession, providing career opportunities in various disciplines to many young people over the entire spectrum of society.”

Cattle farming is still in his blood, Dr Köster said. “Agriculture is such a major component of the economy and the food chain, and therefore UP has a major role to play in ensuring that the industry grows and we do the right research.” Recalling his days as a student, he says, “I stayed at House Mopane, and enjoyed student life and played various sports. I am a proud Tukkie, and made many friends that I still either work with or see in industry.” 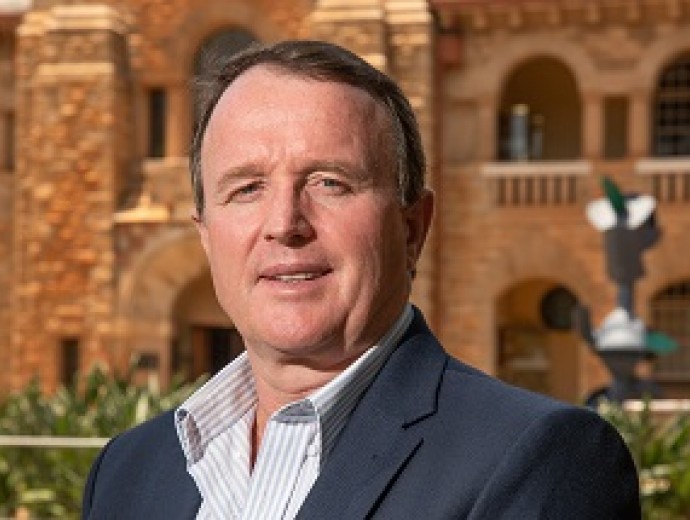 Dr Hinner Köster, President of the Convocation of the University of Pretoria.