The inaugural donor appreciation event was recently held at the newly opened Javett Art Centre at the University of Pretoria (UP). Various donors took a tour of the campus and enjoyed a talk by Professor Tawana Kupe, UP Vice-Chancellor and Principal, before being treated to lunch and a tour of the Javett Art Centre, which opened its doors in September.

Hernan Finkel, Deputy Director of Relationship Management and Fundraising at UP, welcomed guests and staff. “The event is to say thank you for continuous support and also to share a few of our achievements and projects that are currently underway,” he told the audience. Donors will also be invited to the graduation ceremonies and can expect their invitation early next year. UP Vice-Chancellor and Principal Professor Tawana Kupe shares his vision for the University with guests.

Prof Kupe thanked the donors by painting a picture of what student sponsorship means, not only to individual students, but to society as a whole. “A bursary is used to transform a student into a person who gives back. What UP achieves, spills over into the environment around us. What South Africa achieves, spills over to the continent. Therefore donors contribute to the development and prosperity of other nations too.”

He spoke of UP’s significant world-firsts as “a representation of what donor funding does”. The intention of UP, according to Prof Kupe, is “to play in the same league as what South Africa does on the international stage”, citing as an example the country’s inclusion in the United Nations Security Council, which starts next year and lasts until 2022. He observed that UP’s global rankings were indicative of a similar “over achievement”, seeing as the university is only 100 years old. Prof Kupe emphasised that the students who will contribute to these goals will require more of the opportunities currently provided by donors, many of whom were present in the room. Guests were treated to a tour of the Javett Art Centre.

UP is currently the largest contact university in the country, with more than 56 000 contact students. In 2018, 25 633 of those students were awarded bursaries in excess of R1.35 billion. By 2025, the number of students at UP will increase to 75 000 “due to a need for scarce skills and those skills that are integral but perhaps not described as scarce”, said Prof Kupe.

He also highlighted some positive transformation statistics. “In 1994, 11% of the student population were black, and in 2019 that number is 65%, where black students make up over 70% of students in UP residences. Women make up 55% of students, which is way above diversity and transformation goals. Transformation means achieving diversity, which in turn means the presence of everyone and the absence of no one.”

As such, Prof Kupe stressed that the need for funding will be more important than ever in order to achieve a society with diverse members, academic excellence on par with international standards and to produce more world-firsts. 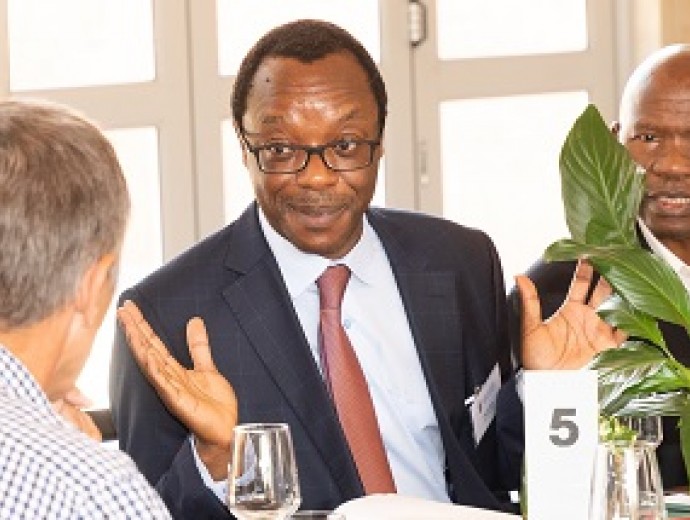 UP Vice-Chancellor and Principal Professor Tawana Kupe with guests.