Fifteen years ago, armed with a dream and R200 to get him started in a brand new city, Dakalo Muavha took a leap of faith – and it changed his life forever.

Today Dr Muavha is one of South Africa’s four urogynaecologists, a new speciality that has the ability to assist people suffering from conditions that are not only embarrassing, but can also make the lives of patients a living hell if untreated.

Dr Muavha (35), a University of Pretoria (UP) alumnus, explains that, while growing up in a small village near Makhado (Louis Trichardt) in Limpopo, he always wanted to be a doctor someday. He drew his inspiration from a local general practitioner who was known in the community for providing quality healthcare at affordable rates. It became his life’s mission to also someday be able to contribute to the lives of the people in his community meaningfully, like his hero had.

“I was born in a little village called Nwaxinyamani and raised by a single mother. My mother never held a formal job but would sell sweets at the corner street or help in people‘s homes for us to have food. Growing up I never felt that I was poor, because in our village we were all coming from a similar background. Most of us travelled long distances by foot, passing through a river to get to school. During rainy sessions we would normally have to swim against the river current to reach the school, but this did not stop me, since I always had a burning desire to be a medical doctor.

As a testament to his fighting spirit, in his senior years in high school, Muavha got himself registered to do higher grade mathematics, something that was unheard of in his school. Even though his plan didn’t work out, he found another way to study medicine at UP. And once he did, an uphill battle awaited him.

“One of the challenges was to adapt to the magnitude of the structures at the University of Pretoria, since before coming to the University one was accustomed to mud houses with thatched roofs. It sounds trivial now, but 15 years ago it was a cultural shock to move from a rural, remote village to a big city,” Dr Muavha says.

After arriving in Pretoria in 2003 – aged 19 and with only the R200 that his mother had given him for a single fare to the capital – Muavha had no idea of where he’d live or what he’d eat. At this point the role played by UP staff would keep the dream of becoming a doctor from slipping away from him.

With the basics sorted, his journey could truly begin. On the academic side of things, the differences in the quality of education had him at a disadvantage. After a particularly disappointing result, the assistance of a lecturer helped him pull through. “I was one of the top students in my high school, now struggling at the bottom in first year. I remember crying inconsolably in the office of our Physics lecturer after getting 22%, because I had never had such a low mark in my school career. I was also worried that if I failed I would lose the scholarship and some of the scholarship pocket money which I was sending home to my mother to help my siblings with food. Mr Brink arranged that I get extra lessons, and that was very instrumental in subsequent performance. I managed to adapt and finished medicine in record time.”

Today, Dr Muavha is one of South Africa’s few qualified urogynaecologists, a field of medicine that aims to assist patients with issues relating to urology and gynaecology such as urinary incontinence, faecal incontinence, and pelvic organ prolapse. Dr Muavha opened Limpopo’s first urogynaecology hubs in the two major private hospitals in Polokwane, as well as the provincial hospital. In addition to this he runs a YouTube channel to give the public an insight into just how urogynaecology works.

Dr Muavha says the education he received at UP was an instrumental part of making his dream come true. This is why he encourages young and old to choose UP. “I feel the University of Pretoria has been one of the institutions of higher learning which embraced transformation very early, when it was not fashionable to do so. I personally felt supported by the University system, even at the time when I struggled not only financially but also academically. I truly believe that the culture of the institution is open and favourable to even a young black rural boy, like I was 15 years ago.” 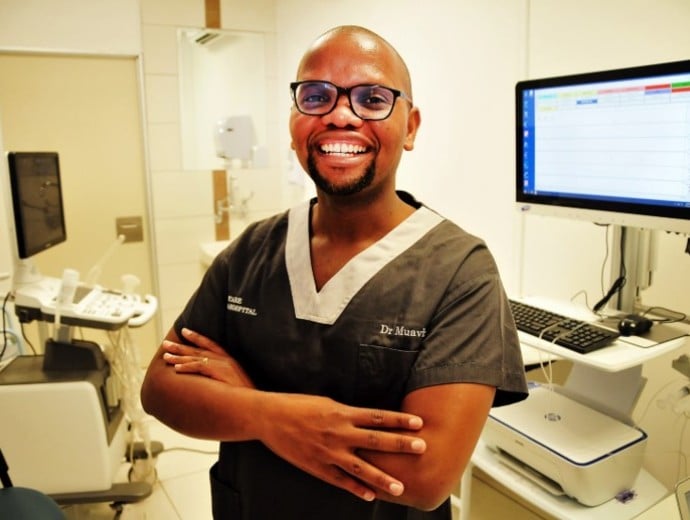