The University of Pretoria, proudly rooted on the African continent, is ranked as one of the top 600 universities in the world. As a global player, it is important that the University find ways to stay connected with its globetrotting alumni. Just as knowledge transcends borders, so do graduates.

This year saw the Alumni Relations Office proactively reach out to graduates. The aim was to strengthen connections and relationships with alumni across the globe. This aligns with a key focus of the University’s 2025 Institutional Plan, which is to strengthen UP’s international profile and visibility.

The Alumni Relations Office’s drive to reconnect with international alumni was therefore timely, as it coincided with the appointment of Vice-Chancellor and Principal Professor Tawana Kupe in January 2019. During 2019, Prof Kupe has been on the Vice-Chancellor’s Roadshow, visiting different cities locally and internationally to meet with alumni, while promoting collaboration and partnerships with international universities.

Prof Kupe hosted alumni dinners in a number of cities, at which he updated alums on how their University is doing. He also introduced his vision for the future of the institution and reenergised alumni to support their alma mater.

In September 2019 Prof Kupe hosted dinners in Australia and New Zealand for alumni residing in Perth, Melbourne, Sydney and Auckland. During the trip, he also spent time developing partnerships with Australian-based institutions that form part of the Australia Africa Universities Network (AAUN).

Filled with enthusiasm, alumni were happy to have their university – a special piece of home – visit them. They reminisced about their time on campus and spoke highly about having a degree from a credible and internationally recognised institution. Many affirmed that a UP degree is taken very seriously internationally.

During the dinners Alumni Relations Manager Samantha Castle encouraged guests to download the UP Alumni Connect App. “The app is convenient, especially for alumni living outside of Pretoria to stay connected by joining city-based groups on the platform,” she said.

“It’s just another useful way of staying in touch and benefitting from a very powerful Tuks alumni network.”

The dinners afforded UP alumni the opportunity to network and meet other graduates staying in the same city. Many indicated their interest in establishing alumni chapters. They indicated that not only could it be a useful way of staying connected to the University, but also a great way of developing an expat support network. 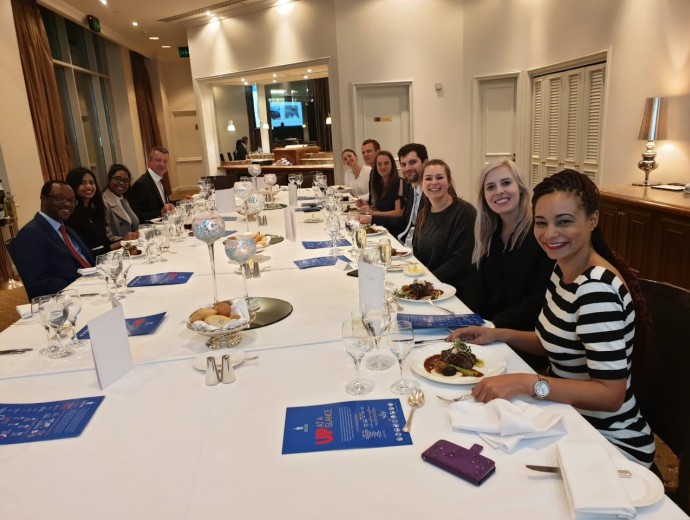