Meeting with Dion Shango is exciting for several reasons. Firstly, our meeting comes on the back of his landmark success of becoming the first black Chief Executive Officer (CEO) of PwC Africa. Secondly, I discover a humility, friendliness and quiet seriousness in Shango – it inspires giddy anticipation about a future with strong, compassionate leaders.

“My mother was a teacher at Pula Difate Primary School in Mamelodi East,” he says. “In Grade 6 she took me out of that school and put me in Christian Brothers’ College (CBC) in Silverton [Pretoria].”

In the year Shango started attending CBC, he repeated Grade 6, which he says helped to familiarise him with the new standards and different teaching styles. From there, he and several friends, from home and CBC, went on to study at the University of Pretoria (UP) and further afield. Shango describes UP as a place of fond memories and says his varsity days were “some of the best”.

However, his journey was not without trials, and is perhaps not typical for someone who has risen to the position of PwC CEO.

“Originally, my marks were not good enough to get into BCom Accounting Sciences,” he explains. “So I had to study Financial Accounting.” Also, some of the classes were taught exclusively in Afrikaans. Studying and working in a third language could prove to be too much of a challenge for some, but for Shango, the experience steeled him and contributed to who he is today.

He says there are three aspirational values he and his wife have long held and intend to instil in their three children: humility, respect and perseverance. “My children need to know how to get up every time they fall down.” These are the values through which Shango filters his experiences and which have no doubt made him the leader he is today.

But leadership is not without challenges. One such challenge is accepting the weight of responsibility to effect change for others in terms of transformation in the company. That means bringing the African, Coloured and Indian (ACI) composition of PwC up from 32%, to ensure better representation. PwC’s 2022 target is to have a 40% make-up of ACI partners. Shango says that while this may be a point of criticism, it is a point he embraces.

“The current pool of registered accountants in South Africa is about 46 000 – 26% of that pool is ACI accountants,” he explains. “That is a small pool and our target is double the national average.” Shango says while it is possible to become a partner without being a chartered accountant outside of the Assurance branch of PwC, transformation targets must be achieved in tandem with keeping standards high.

“In order to combine merit, skills and attributes to be great professionals, most partners must be qualified chartered accountants. The road to partner generally takes a long time: a long journey may take eight years if you’re luckily, ideally 10 to give you a solid grounding and experience.”

He also aims to grow the composition of female employees from 23% to 30% by 2022. He recognises that women at the company need “the same opportunity to thrive and get to the top like their male counterparts, as men inherently have advantages, such as not having to mother children. It’s something that’s incredibly important to us”.

The conversation touches on duties beyond South Africa. “We have a responsibility to the rest of the continent. In the eyes of those north of the Limpopo, people have said to me, ‘Dion, you guys are our hope.’ Sometimes we undermine that vision people have of us.”

He recalls an encounter with a receptionist in Accra, Ghana whose dream it was to visit South Africa. “The passion on his face has stuck with me,” he says. There was also a PwC manager visiting from Nigeria who, based solely on the infrastructure between airport and conference centre, told Shango that he had never been so proud to be an African. “It was beyond words,” Shango says. “Again, it is something we take incredibly seriously.”

Something else that is important to the new CEO is UP. “It is a source of great pride to me. As alumni, it is up to us to uphold standards and enhance them, and to make the university even more competitive on the world stage than it is right now. Tuks produces responsible citizens who contribute to the growth and development of South Africa and the continent.”

Many PwC employees are UP alumi and a large number of clients too. Shango is also thankful to have maintained good relationships with people such as Derick de Jongh at the Albert Luthuli Centre for Responsible Leadership and former Vice-Chancellor Professor Cheryl de la Rey. Interestingly, when he was a young manager, Shango worked on an external audit of UP. “It was [looking at] the university from a very different angle; it’s world class and runs like a sustainable and efficient business.”

Shango looks to the future and hopes that the country will “pull in the same direction and get things right”.

“As South Africans we can hold our own,” he says. “We don’t need to stand back for anyone.” 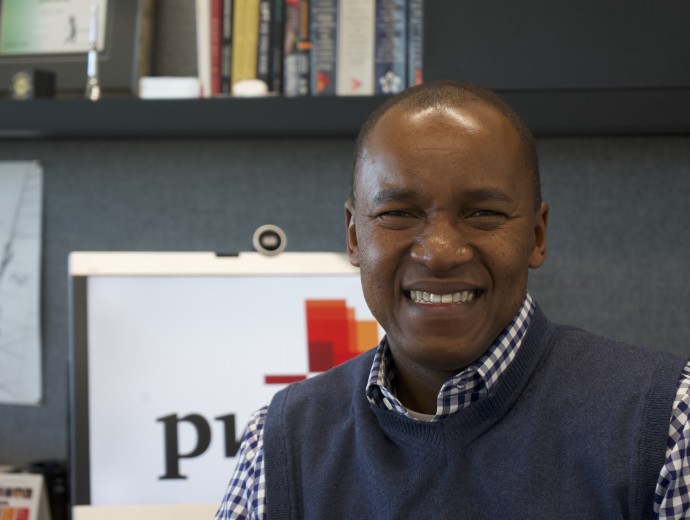