#TuksSport at the forefront of sporting excellence

In 2017, the University of Pretoria (UP) has raised the standard of university sport to a new level, winning six of the Varsity competitions and nine of the University Sports South Africa (USSA) tournaments.

Furthermore, two UP-Tuks athletes became world champions in their respective Olympic sports codes, proving that the coaches, athletes and administrators at UP are at the forefront of sporting excellence.

UP-Tuks won the Varsity Netball Tournament, beating the North-West University Pukke 43–41 in the final. It was the first time in five years that UP-Tuks won, having fallen one goal short of beating the Pukke last year. Head coach Jenny van Dyk made South African netball history by becoming the first person to coach teams to win the Brutal Fruit Series, the Senior Provincial Tournament and the Varsity Netball Tournament in the same year.

Another highlight of the year was TuksRugby beating Maties 28–21 in the Varsity Cup final. It was the third time that the 'Striped-UP Team' won the tournament. Coach Pote Human is a firm believer in developing a complete individual through rugby, and feels that the academic programme at UP, coupled with the pressure to win, creates an ideal training ground for real life.

The Tuks Young Guns are one of UP's most successful sports teams ever. The under-20 rugby team won the Varsity Cup Young Guns Competition for a record fifth time in six years, beating Maties 42–37 in this year's final.

The TuksHockey women's team won both the Varsity Tournament and the USSA Tournament. It is quite rare for a team in any sports code to win both university tournaments in the same year. Captain Natalie Esteves said: 'Our motivation starts the moment when we put on the white jersey with “The Stripe”.'

UP-Tuks ensured a third Varsity Football title by outplaying TUT to win 2–0 in the final played at TUT. This victory makes UP-Tuks the most successful team in the history of the Varsity Tournament, winning it three out of the five years it has been played. They were also victorious in 2013 and 2014. Coach Tlisane Motaung said: 'The University deserved the Varsity trophy and we delivered. That is what makes my job as a coach rewarding.'

The Assupol-Tuks Cricket Team dominated local club cricket, winning five out of six tournaments. The team won both the national club and the USSA trophies. Their only setback was losing to the Pukke in the Varsity final.

A further highlight was Kirsten McCann winning the lightweight women's single sculls at the World Rowing Championships in Florida, USA. She is the first South African female rower to win a gold medal at a senior world championship.

Luvo Manyonga became the first male athlete from TuksAthletics to win a world title when he won the long jump in London. His 29-year-old coach, Neil Cornelius, also made local athletics history as the youngest South African coach to have trained a world champion.

Click here for this article in the Pretoria News. 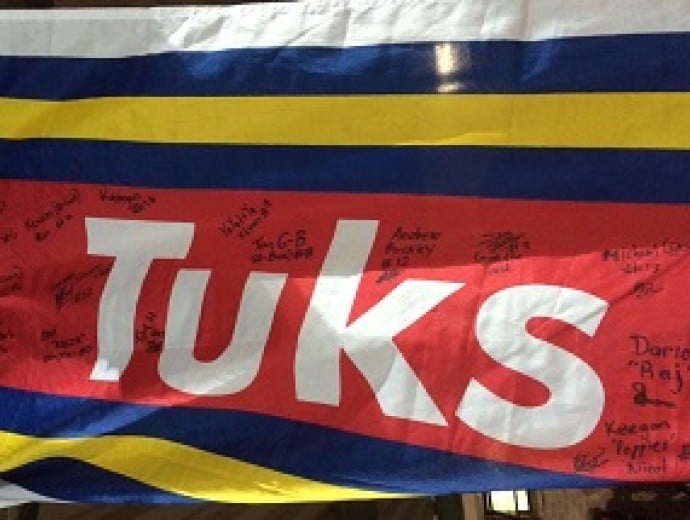