UP EXPERT OPINION: Sustainable small-scale fisheries can help people and the planet

As the global population increases, the demand for seafood is expected to rise, too. Already, Africa and Asia have seen fish production double over the past few decades. Globally, fish consumption is set to rise by around 15% by 20302.

Success will depend on small-scale fisheries. Small operations tend to deliver both food and income directly to the people who need them most, and locals have a strong incentive to make their practices sustainable. What’s more, these fisheries can be remarkably efficient. Almost everything that hand-to-mouth fisheries catch is consumed. By contrast, around 20% of the fish caught by industrial fleets is estimated to be wasted, mainly because of unwanted by-catch4. So, whereas large-scale operators land more fish, small-scale fisheries provide a larger share of the fish that is actually consumed.

Small fishers rarely have the right resources to expand their operations, or even to survive. If they do scale up, they might lose some of their current advantages or engage in the same harmful practices as do large commercial fisheries. Managed with care, however, small fisheries could provide win–wins for livelihoods and the environment. Making this happen should be high on the agenda at the UN Ocean Conference in Lisbon this month.

As someone who has studied food security and policymaking for decades, here I suggest ways to support and strengthen artisanal fishing operations.

The potential and importance of small-scale fisheries has been increasingly recognized over the past decade. In 2014, the UN Food and Agriculture Organization (FAO) provided voluntary guidelines to support sustainable small-scale fisheries, aimed at improving food security and eradicating poverty. A forthcoming report by the FAO, Duke University in Durham, North Carolina, and the non-profit organization WorldFish, headquartered in Penang, Malaysia, will conclude a remarkable initiative to collate case studies, questionnaire results and data sets to help get fishers a seat at policymakers’ tables. The UN General Assembly has declared 2022 the International Year of Artisanal Fisheries and Aquaculture.

Most nations already have management policies for marine ecosystems that provide for small-scale fisheries. In India, Indonesia, Malaysia and Sri Lanka, for example, there is a ban on trawling within about 8 kilometres of the coastline to prevent industrial fishers from scooping up large catches, which protects those regions for local fishers. Countries such as Costa Rica ease access by exempting small-scale fisheries from licences, and Angola exempts subsistence and artisanal fishers from paying licensing fees5.

But this is not enough. Small-scale fishers’ rights to access are often poorly defined, ineffectively enforced or unfairly distributed4. The boundaries of exclusive economic zones (EEZs) — the parts of the coast belonging to a given nation — are often poorly policed, and large-scale vessels regularly swoop in and take sea life through bottom trawling, something that small fishers seldom practice. Large-scale bottom-trawlers account for 26% of the global fisheries catch, with more than 99% of that occurring in the EEZs of coastal countries6. Even when there are well-meaning policies to protect local fishers, foreign vessels can take advantage. For instance, a 2018 investigation by the Environmental Justice Foundation in London found that around 90% of Ghana’s industrial fishing fleet was linked to Chinese ownership, despite Ghanaian laws expressly forbidding foreign ownership or control of its boats. Clearer definitions of the terms fisher, fishing and fishing vessel to make provisions for small-scale operators could help, in part, to avoid such abuse.

Government subsidies also require reform. One estimate found that large-scale fishers receive about three-and-a-half times more subsidies than small-scale fishers do7. This widens the existing advantages of large operations in terms of vessels and gear, infrastructure (including cold storage), processing capacity and access to cheap fuel. By giving large-scale fishers the capacity to catch even more, it can have the perverse effect of encouraging overfishing8. Instead, subsidies and other funds should be directed towards small-scale fishers to let them expand their access to markets, while keeping them from adopting the negative practices of large-scale operations.

The total global loss and waste from fisheries is estimated at between 30% and 35% annually1. This could increase as smaller operations broaden their markets. A 2015 estimate of the Volta Basin coast in West Africa attributed 65% of fish-production losses to a lack of technology and good manufacturing practices, and to a lack of infrastructure such as decent roads and cold storage9. The study found that fish were rarely lost to physical damage during the process; most waste resulted from spoilage. Such losses limit the sale of fish locally and to distant markets.

Public and private investment in cold-storage facilities and processing equipment (such as for drying, fermentation, pickling or smoking) could help. Current funding for fishery conservation projects comes from development partners, regional banks, the World Bank, private foundations and other agencies — with some entities also providing microloans to small-scale fisheries — but these efforts are uncoordinated and inadequate.

One promising strategy is to pair international or national funding with direct contracts for feeding programmes linked to schools, hospitals and similar facilities. Such arrangements would provide small fisheries with large, consistent markets and storage infrastructure that boosts local consumption and does not incentivize overfishing.

Other strategies pair local fishers with conservation efforts. As fishing operations scale up, fish entrails and other waste cannot simply be thrown into the sea: care must be taken not to contaminate the environment. One option is to fund ecosystem-restoration projects that also benefit local fisheries. For example, the Mikoko Pamoja (Mangroves Together) project in Gazi Bay, Kenya, restores and conserves degraded mangrove forests, which act as nurseries for young fish. The restoration thus earns saleable carbon credits while enhancing nearby fishery grounds for the local community.

Consumers could support small fisheries by buying local, because shorter supply chains mean more income for the fishers. The use of ecolabels — which seek to promote sustainably managed fisheries by certifying that a product has a reduced environmental impact — could also encourage consumer adoption, and help consumers to make informed choices.

However, such certification is costly to obtain and maintain, and requires compliance, monitoring and reporting. Certification can distort market opportunities, effectively excluding small enterprises from entering international markets. These programmes can also have unintended consequences: most certification programmes focus on environmental sustainability and pay less attention to social responsibility elements, such as fairness in access to resources, markets and wages.

Instead, simple incentive programmes could be implemented by funders, managers and local governments trying to promote sustainable fisheries. For example, local markets could display a rating system for individual fishers or small entrepreneurs. This could include various elements of sustainability other than environmental ones — such as providing information on the type of fishing gear, location of the catch and freshness. Promoting the rating as a social responsibility concept would inform consumers of the need to support sustainable fisheries. The rating system could be conducted by community members trained in inspection and enforcement.

Diverse efforts are needed to protect small fisheries’ access and to boost local consumption and reduce waste, and must be tailored to local community conditions. The 2021 UN Food Systems Summit was a ‘people’s summit’ that elevated roles for Indigenous peoples and civil-society groups, yet the voice of fishing communities was notably absent.

Few governments take an integrated approach to the development, implementation and enforcement of policies. For example, policies governing urban development tend not to consider the implications on the ocean, fish and fishers. In the late 2000s, for instance, fishers were initially denied access to traditional public fishing zones along the beach front in Durban, South Africa, following upgrades to the port and the development of a private marina and hotel. (Fishers later reclaimed some of the zones after protests and engagement with the authorities10.)

Cooperatives can help on several fronts: by coordinating fishing activities, sharing information (about weather, sea conditions or fish movement) and advocating effectively for human and social rights. For instance, CoopeSoliDar, a small-scale fisheries management cooperative in San José, Costa Rica, has helped to strengthen collective action to sustainably use molluscs, alleviate poverty and strengthen the representation of women and young people in community decision-making. Governments can help by creating a legal framework to establish cooperatives and include them in decisions to manage marine resources.

Local communities can also stand up for themselves. For example, a class action by a group of 5,000 artisanal fishers in South Africa in 2004 argued against a policy they said did not give them recognition or access to food and fishing rights that were established in the country’s constitution. The court ruled in the group’s favour in 2007, and the resulting legal framework granted small-scale fishers collective community fishing rights, recognizing community members as bona fide fishers11.

Small fisheries do not operate in isolation. Unlike terrestrial resources, the ocean is an extensive, global commons without clear territorial boundaries. Issues as diverse as climate change, ocean acidification, overfishing and pollution by nutrients and plastics and other chemicals all affect local fishers. But such system interactions get scant attention when fisheries policies focus on a single seafood stock or individual fishing area.

Whereas the concept of integrated land management has been part of the development agenda for a few decades, integrated marine management is only now emerging. To work, it must involve all relevant stakeholders, including small-scale fishers.

A context-specific strategy in the Seychelles is a leading example of such integration. Communities, financing partners and the government worked together to create the Seychelles Marine Spatial Plan Initiative, which protects 30% of the archipelago’s waters and boosts climate resilience. The Seychelles faces significant threats from rising sea levels and warmer air and water temperatures that put fisheries, infrastructure, tourism and its rich biodiversity at risk.

In an example in the Coral Triangle region (encompassing Indonesia, Malaysia, Papua New Guinea, the Philippines, the Solomon Islands and East Timor), local communities gave their input to a marine protection plan. This led to a greater understanding of how practices such as overfishing and taking undersized stock sustains marine and coastal resources, and how managing these helps to address food security, climate change and threats to marine biodiversity. Such cooperation between fishing communities and governments in managing marine protected areas is essential to the preservation of future fish stocks (see go.nature.com/3xvkqxj).

Fishers should be actively engaged in relevant meetings held by the UN and national and local councils, so that they can weigh in on matters that affect fishing access, their livelihoods and environmental concerns. Both fishers and organizers must help to build empowerment mechanisms to make sure their voices are heard, such as providing translation services and scheduling meetings at accessible locations. This is important not just for the fishers’ human rights, but also because much can be learnt from artisanal fishers’ local knowledge.

Moves that would, for instance, restrict the fishing season or areas so that stocks or biodiversity can recover should include compensation mechanisms that will secure fishers’ cooperation and livelihoods. Social-protection measures such as food and income assistance can also help to tide fishers over.

When fish swim in schools, they move more efficiently, forage better and are protected from predators. The same might be said for small-scale fishers, but those networks should extend to local and international communities, too. Collaborative problem-solving and an integrated food system can deliver seafood protein, sustainably, to a world that increasingly needs it. 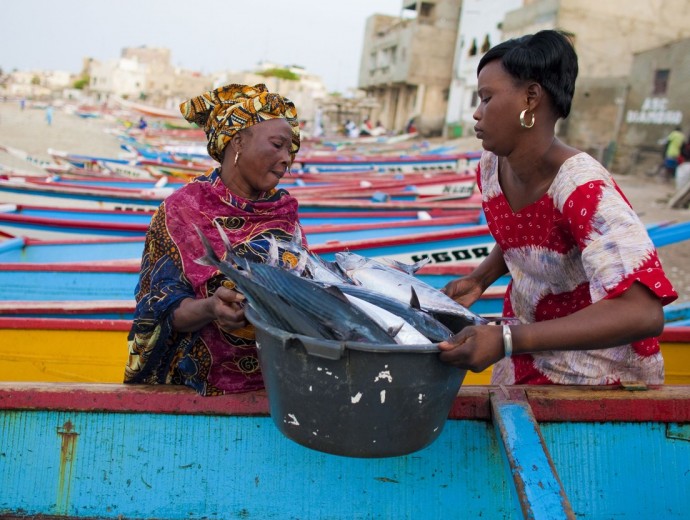