COVID-19 has had a severe effect on the supply and demand of food production, and could lead to a severe food security crisis unless Africa has the most appropriate policies in place.

This was the view of Dr Khaled El-Taweel, a panellist on the University of Pretoria’s (UP) recent edition of its online discussion events, LeadUP Alumni Thought Leadership Series. UP alumnus Dr El-Taweel is a programme officer at the Food and Agriculture Organisation (FAO) of the United Nations, and was part of a panel of experts who shared their views on the challenges related to food security and how legislators have responded.

This event, titled “COVID-19: Implications for food security in Africa”, featured three other panellists: Dr Clement Adjorlolo, Head of the Agriculture Unit at the African Union Development Agency; Professor Vinny Naidoo, Dean of UP’s Faculty of Veterinary Science; and Professor Sheryl Hendriks, one of the country’s top food security experts and Head of the Department of Agricultural Economics, Extension and Rural Development at UP. Professor Barend Erasmus, Dean of UP’s Faculty of Natural and Agricultural Sciences, moderated the event.

“The impact of COVID-19 on Africa is different from other countries because the continent is vulnerable,” said Dr El-Taweel, adding that, “20% of Africa’s population experiences one level of hunger along with some form of malnutrition.” The continent is also subject to external shocks: eastern Africa has been hit by a locust scourge that is affecting food security, while southern Africa’s drought of more than 70 years has affected production yields. “There is [also] high population growth and a dependence on the external world to feed Africa,” he said.

In addition, the shutdown enforced by many governments has affected the supply and demand of food. “The restriction of the movement of people led to lower food productivity. There was less access to seed, machinery and fertiliser,” Dr El-Taweel explained. “On the demand side, the restriction of movement led to a lower demand for exports.”

He cautioned that it is imperative that COVID-19 does not turn into a food security crisis. While the African Union responded quickly to the pandemic when it took the decision that food systems should be kept alive, many governments have not managed to achieve the proposal that at least 10% of their budgets be put towards agriculture.

The pandemic is a wake-up call for an overview of reforms in agricultural policy, said Dr El-Taweel. He explained that food production should be localised and that a regional approach should be taken. There is a target of 50% for intra-Africa trade by 2050; currently this is around 20%.

Ministers of agriculture, the African Union and the FAO had held a high-level meeting in April to discuss the impact of the pandemic, said Dr Adjorlolo. The impact of COVID-19 resulted in data being generated and insights being made into policymaking for the present. “Leadership was required to negotiate the movement of people and trade corridors being open for essential goods to be distributed,” Dr Adjorlolo said. In Africa, 70% of the people who trade across borders are women; they could not send income to their families due to the shutdown, resulting in many communities being affected. Africa cannot afford a situation where a food crisis outweighs a health crisis, Dr Adjorlolo added.

For Prof Hendriks, Africa is facing a health pandemic as well as a humanitarian crisis. “This pandemic is going to stretch us as academics, government and policymakers who have to think and act fast in a far more sectoral response. How we respond now will shape the future,” she said.

Prof Naidoo noted that COVID-19 has had an impact on animal production. “This includes the production of high-quality protein – meat, eggs and milk,” he said. “Commercial agricultural large-scale farmers, dairies, feeder operations and flocks that supply restaurants and supermarkets had issues with supply and demand as well as labour problems.” This was due to travel restrictions on people. Furthermore, “while wildlife produces 20% of the meat in the country, poaching of wildlife was on the increase as people could not purchase food”.

South Africa has 180 000 small-scale farmers who were hardest hit – without access to markets, their income took a knock. “South Africa has come out of a foot-and-mouth quarantine, and this pandemic adds a burden to the system.” 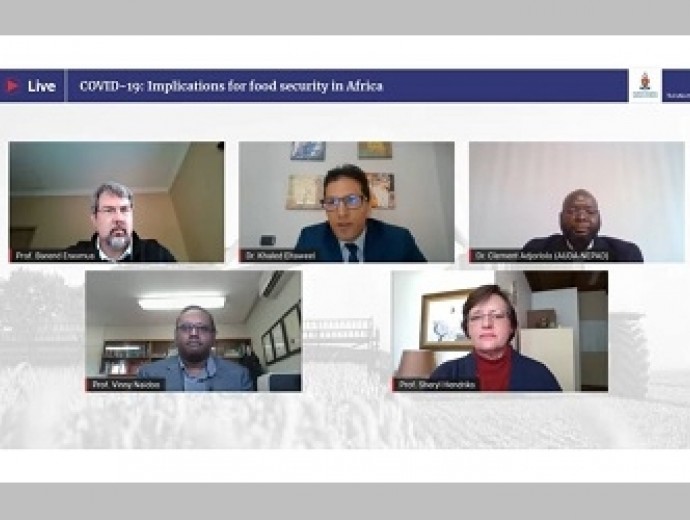