The Tuks athlete, Taylon Bieldt, has steadily been getting faster without anyone really taking note, but things changed when she won the 400m-hurdles in 56.17 seconds at the Bestmed TuksAthletics Stadium.

It now seems as if the 23-year-old is closer to qualify for the Tokyo 2020 Olympic Games. She only needs to be 0.77s faster. The Olympic A-qualifying standard is 55.40s. Her winning time during the recent 2021 Athletics Gauteng North Championships is a massive personal best. Last year, she ran 57.88s.

Bieldt took a four-year sabbatical from running the 400m-hurdles. Last year, was the first time in five years that she competed in the longer hurdles event. She used to be a 100m-hurdler having competed at the previous Commonwealth Youth Games 2015 and World Junior Championships editions.

Wenda Nel (an eight-time South African champion) and Zeney van der Walt (a former double world champion) are the only local athletes who had run times faster than 56.17s since 2016.

Both of them got beaten by Bieldt during the Gauteng North Championships. In the Avanti International Meeting at Ruimsig Stadium, Nel had her work cut out to finish ahead of Bieldt. Nel won in 56.16s and Bieldt came second in 56.26s.

Nel might be surprised on hearing that she played a significant role in Bieldt's changing fortunes. According to her, there was a stage last year when she felt really frustrated.

"No matter how hard I trained, the times I ran remained the same. Wenda encouraged me not to lose faith in my abilities, telling me that my breakthrough race will happen when I least expect it. And when it does, everything is going to change. Wenda might not know it, but she has been my mentor for a while. I have been watching what she does before a race and afterwards. All the time, I am learning."

Getting to beat her mentor changed nothing.

"It was only a race. I was lucky on the day to have been the better athlete. Getting to beat Wenda and Zeney did not mean I am suddenly South Africa's best female 400m-hurdler. Everything can change in the next race, and it did on Tuesday. What is exciting is that we can help each other to qualify for the Olympic Games."

The Tuks hurdler considers switching from the 100m-hurdles to the 400m-hurdles as one of the best decisions she made.

"I love the challenge of the 400m-hurdles-especially the hard training. There are days it feels like I might 'die', but the next day I can't wait to do it all over again. I don't think I would have ever reached my full potential as a 100m-hurdler. It seems I am more of an endurance athlete."

The Tuks-athlete is coached by her mom, Charmaine, who got provincial colours in five different sports. 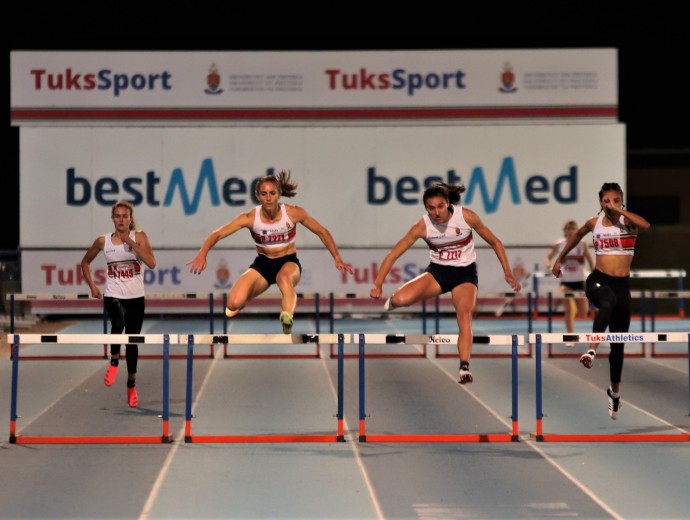