These are the words most athletes have been "dying" to hear since level one of the national lockdown has been announced.  Tomorrow is the big night. It is the first time since the Gauteng North Championships in March that the athletes get to compete at Tuks.

But it is not going to be business as usual. Track athletes will only get to compete in the 60-, 300-, 600- and 1000 metres events. For the field athletes, it is pretty much business as usual. Hammer throw and pole vault are the only two events that are missing from the program.

As most of the Tuks athletes were only allowed from yesterday to resume their training on the tartan track, it is unlikely that there will be any outstanding performances.

The Tuks long jumper, Jovan van Vuuren, whose best effort of 8.10m ranks him as one of South Africa's ten all-time best has, for now, no plans to "fly" into the sandpit. He will be competing over 60 metres. Van Vuuren believes that on a good day, he can clock a time of 6.70s, but he doubts whether it is going to be tomorrow.

"The race is an ice breaker. I need to get a feel of what it is like to run on tartan again. It is also going to be essential to see whether the hard work I did during the lockdown has been sufficient."

The 60 metres men's race could be exciting. Rivaldo Roberts is also competing in the short sprint. The Tuks athlete is a former South African 110m-hurdles youth champion, but over the past few seasons, he has mostly competed in the 400m-hurdles. He has, however, decided to switch back to the shorter hurdles event—those who saw him train is impressed by his speed.

Riana Raath who coaches Griesel as well as Roberts said the lockdown made things challenging as no athlete was allowed to train on any tartan track.

"As a coach, I had to improvise all the time during the lockdown. The athletes did their gym training at my house. I had to borrow equipment from friends and even from schools.

"As for running, we trained in parks, rugby fields, actually any open space. At first, we were not allowed to train in the parks. I had the athletes sprint through and then make their recovery on the sidewalk.

"I discovered a nice empty piece of ground behind the Council for Scientific and Industrial Research where we could do time trials. It became a whole logistical exercise. Often it would be a parent who would set the athletes off using a mobile phone. We even had water tables set up."

"Everyone who is involved whether it is as an athlete, coach, officials should sanitise. Athletes must wear their masks when not competing. I cannot emphasise it enough. Everyone should make sure that they download the HealthCheck App beforehand and follow the instructions." 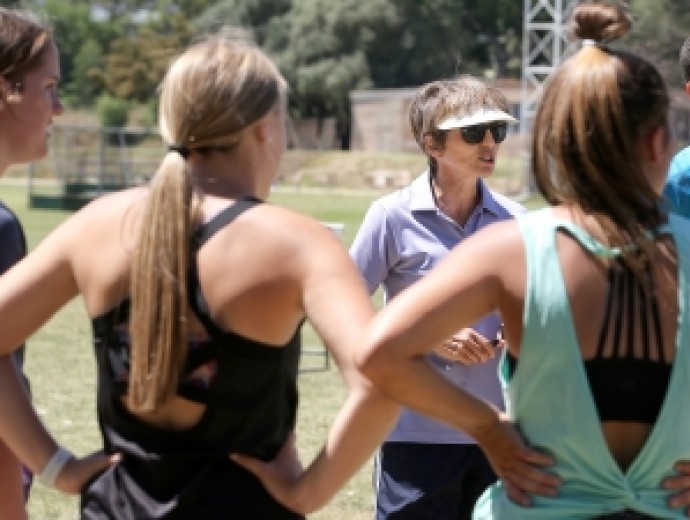