When it comes to TuksRugby Conrad Boshoff can genuinely claim to have been there, done that and got the T-shirt to prove it.

There are certainly not many who could claim to have played for Tuks, coached at Tuks and now manages the club. His involvement started way back in 2001 as a player. Currently, he is the club's Acting Head of Programme & Logistics.

"One of the last men standing since 2001," is how Boshoff jokingly refers to himself.

His passion has not diminished one bit. After 19 years Boshoff is as committed to Tuks as the first day he sidestepped and dummied with a ball in hand wearing the coveted striped jersey.

His dreams, however, have changed. It is not anymore about being the best for 80 minutes plus at a time. Now it is all about what can be done to ensure that Tuks as a club is the best. Boshoff is, however, a realist. He knows it can never be about quick fixes.

"To me, the most important question will always be what can be done to be a better club than we were yesterday. The Covid-19 pandemic has undoubtedly made things more challenging. I have learned to think on my feet in these uncertain times. If you can't adapt to what is happening, you are bound to fail. I don't want to."

The webinars in which TuksRugby has partnered with SA Rugby Legends is one of the exciting projects the club is involved in at the moment. On Wednesday Omar Mouneimne will have a more in-depth look into the defensive side of the game. He is currently the defensive coach for the Bristol Bears.

"The idea with webinars is to assist coaches and players around the world. It is absolutely free. We would, however, appreciate any donations. The money is going towards providing masks and food parcels. It is one of the projects in which we aim to give back to our community," Boshoff explained.

According to Boshoff, due to his parents being teachers, he got to grow up next to the sidelines of various rugby fields. During most Saturdays, he would act as the ballboy. Later on, he started playing himself. He was not a too lousy scrumhalf. In 1999 he represented the Limpopo Blue Bulls at the Cravenweek in George.

As a player and a coach, Boshoff has actively been involved with TuksRugby in more than 200 games. Needless to say, there had been many highlights.

One of the most special moments to him was when Tuks got to win the Varsity Cup for the first time in 2012 beating Maties 29-21. The next year they defended the title thrashing Maties in Coetzenburg. The final score was 44-5.

The 2011 Varsity Cup-final was also special even though Tuks lost at home to UCT.

"It was our biggest crowd at the time. Some spectators even climbed onto the roof of the athletics stadium. The game was not allowed to start until they were safely 'grounded' again."

Asked as to who he thinks has been one of the all-time greats of TuksRugby since 2001 Boshoff immediately singles out the Springbok lock forward Franco Mostert.

"From the very first time, he donned the 'striped jersey' I could see that he is special. Franco does not believe in half measures. He will put his body on the line time and again if it means it will get his team to win."

Asked who he considers being the hard men of Tuks rugby in his time, Boshoff singled out the Cronje brothers, Geo, Jacques and Werner. Apparently, you did not want to mess with them on the field.

Boshoff's all-time Tuks-side selected from 2001 to now might surprise many, but it should be remembered he made his selection on their performances for Tuks. 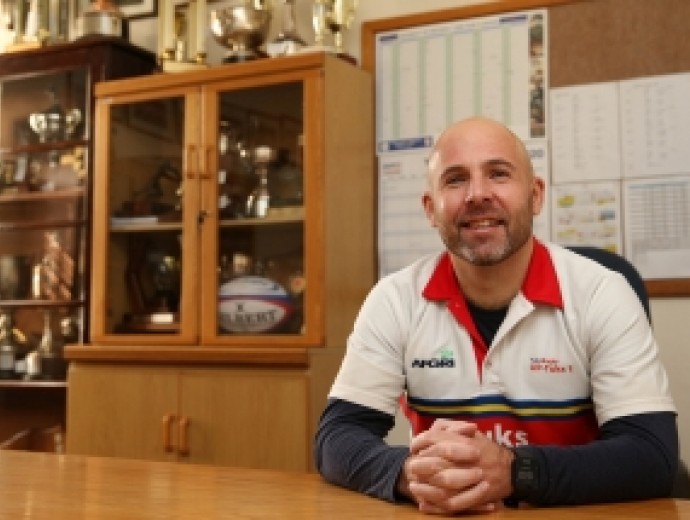