Making Assupol TuksCricket history seemed to be a favourite past time to the Hermann-brothers, Rubin, and Jordan.

Rubin, who is the eldest, last year, gave a classic display of what smashing the ball is about when he scored 245 runs from 148 balls. His innings included 21 fours and 16 sixes. It is the highest score ever by an Assupol Tuks player in a limited over game.

Earlier this season the brothers combined their batting talents to ensure that the surname Herman will be remembered for a long time to come in the club's history.

They opened the innings for Assupol Tuks. No brothers have ever done so. Their stand of 116  runs of 150 balls was vital in helping the team win the Premier League title for a tenth consecutive time. Jordan scored 45 runs and Rubin 71.

Batting together as brothers had been a dream for years. Their age difference however made it an impossibility. It was only from this year that they can team up.

Cricket, actually all sport, has been a passion for both of them from when they can remember. It is due to dad, Marius, who is an absolute sports nut. It was he who made sure his three sons got to understand the finer intricacies of most sports from the moment they were able to walk.

Most family holidays end up being a mini "Olympics". It does not matter whether they play cricket, tennis, golf, basketball etc. It is always about the winner taking it all. Despite the ferocity of the "sports feuds", no one ever forgets that sport is about having fun first.

The brothers certainly benefitted from being so competitive from early on.  Rubin has earned a "Rookie" contract with the Titans as batsman-wicketkeeper. He has been described by the Assupol Tuks head coach, Kruger van Wyk, as a player you can take to "war" at any time as it is guaranteed that Rubin will step up when it matters.

In January during Cricket South Africa's Franchise Cubs week, Jordan seemingly could do nothing wrong. He concluded the tournament as the highest run-scorer. The 402 runs he scored is the most ever during a Cubs Week. It came at an impressive average of 100.5 runs per innings - breaking all the batsman records in Cubs week history.

The one thing Rubin relishes as a batsman is to be opening the innings. For him, there is something to be said to face up to the unknown.

"You are in the frontline, never knowing what awaits you when the first balls are being bowled. There is a real thrill to it. I love it. I feel an opener is central to any team's success because if you are off to a good start, the battle is half won. An opener is also the one who gets to  'coach' his teammates to the do's and don'ts when going out to bat."

Rubin credits his growth as a cricketer to his coach Van Wyk who has played internationally for New Zealand.

"Kruger is so passionate about what he does. It kinda rubs off on us as players. It also gets us to believe nothing is impossible."

"I have learned a lot by watching him bat. The one thing that stands out his sense of calm. He seemingly can adapt to any situation on the field."

Jordan sees himself as a forever student of the game.

"I don't really have role models. I try and learn from everyone. It could be Quinton de Kock's free-flowing batting style or Faf du Plessis captaincy." 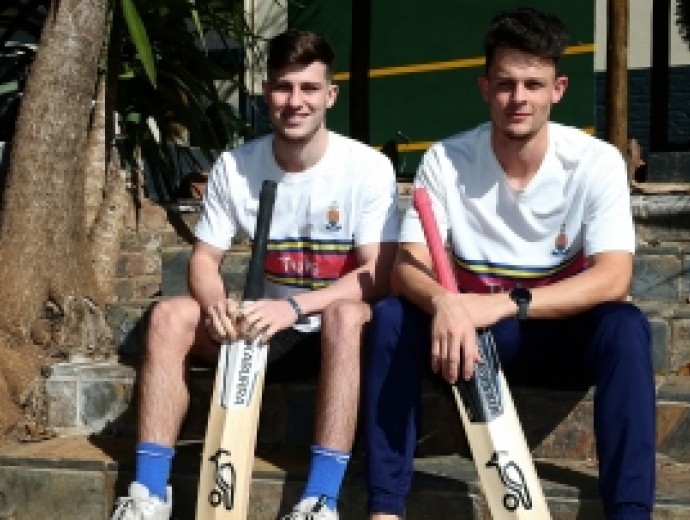