The Delta Drone TuksWomensRugby7's team is hoping to again make their presence felt from Thursday when they compete in Dubai Tournament.

It is the 11th time they are competing. The team debuted in 2009  and has since not missed playing in Dubai. On three occasions, they were third in their competition. They ended up winning the Plate Trophy-final three times.

Riaan van der Merwe (head coach) is quietly confident that his team give a good account of themselves.

"I don't want to get ahead of myself. Sevens rugby tends to be unpredictable because of the tempo the game is played at. Two minutes of lapsed concentration could easily cost you 14 points.

"It is, however, undoubtedly one of the best teams to represent Tuks. Meghan Phillips debuted for the Springboks Sevens-side this year. Libbie Janse van Rensburg has also been training with the Boks recently.

"The former French national sevens player and captain, Johanna Barde, is again playing for us. She was the player of the tournament during the München Oktoberfest. Afterwards, she apologised to me for not being at her best vowing that she is going to train harder for Dubai.

"Maryna Borodina from Ukraine which I consider to be one of the fastest sevens players is also playing for us as well as Andrea Atomi from Romania."

Van der Merwe said he has been approached by one of the current best women's sevens players in the world. She wants to play for Tuks after next year's Tokyo Olympic Games.

Tyler Botha, who did her post-graduate degree last year at Tuks and is currently playing in Hong Kong, is also included. She can play at scrumhalf or centre. According to Van der Merwe, he can field a dream backline.

"Sevens is about speed. It is something that the three international players and Libbie and Meghan, have no shortage of."

Tuks's forwards are also no slouches. The likes of Kemi Baloyi and Cinanda Potgieter were impressive during the USSA and Varsity Tournaments scoring try after try. At times they surprised with their incredible acceleration of speed. This time around they got to do the donkey work upfront, but it is a given if they get the ball in hand it is going to take some doing to stop them.

Tuks's first game is on Thursday when they will be playing Pirates from South Africa. On Friday they are up against Sweden. The game that could possibly decide whether Tuks will progress to the semi-final playoffs is likely going to be the one against Kazaksthan's Almaty's.

The Almaty's won the last encounter in Rome. The previous time Tuks managed to beat them was in 2011.

The Springbok women’s sevens team has withdrawn from playing in Dubai. 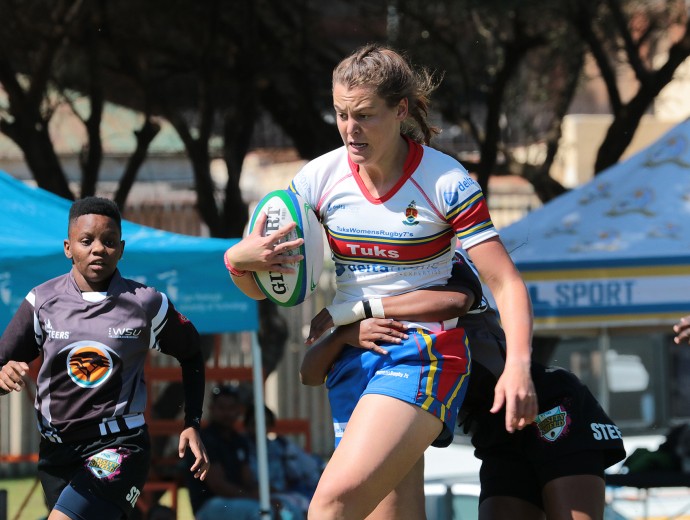