Colloquium Report: Extraction and the Environment, 28-31 May 2019

From 28 to 31 May 2019, the Centre for the Advancement of Scholarship hosted a group of local and international scholars to discuss Extraction and the Environment in colloquium dedicated to using the environmental humanities as a way to engage the phenomenon of extraction in a variety of forms, and the impact this has on the environment. The colloquium opened on the morning of Tuesday 28 May 2019 with a brief introduction by University of Pretoria Vice-Chancellor and Principal, Professor Tawana Kupe. Professor Kupe spoke to increasing environmental degradation and the enormity of today’s environmental challenges. He called for multidisciplinary academic research and the need for Humanities to complement work done by natural scientists. Professor Kupe highlighted some of the steps already taken by the University of Pretoria, which include the establishment of the African Observatory for Humanities for the Environment—an initiatives that is promoting multi-disciplinary research by bringing young African scholars in Humanities; the designation of Environmental Humanities as the signature project for the Centre for the Advancement of Scholarship; and the colloquium, which marked the extension of research footprint, membership, collaboration and exchange in Africa.

In welcoming the delegates, Professor James Ogude, the director of the Centre for the Advancement of Scholarship and convenor of the colloquium, gave a brief background to the African Observatory for Environmental Humanities and the Centre’s signature project, which centres on environmental research as a nodal point at the Centre. He emphasised the need to develop young scholars in this area and his passion in nurturing a new crop of scholars that led to the current colloquium. He pointed out that Africa is the most vulnerable when it comes to the impact of climate change and stands to gain through changes in behaviour towards the environment that only the Humanities can offer. This was followed by opening remarks by Professor Sara Guyer from the Consortium for Humanities Centres and Institutes (CHCI).  CHCI partnered with the Centre for the Advancement of Scholarship to host the colloquium. Professor Guyer opening remarks touched on the history of the CHCI dating back to as early as the 1950s in creating global networks attentive to local and regional environmental issues. She highlighted the role of the Consortium in supporting the development of multi-layered, international research collaborations and bringing together scholars from different continents to undertake research in the broad area of Environmental Humanities. The CHCI has sustained interest in Humanities in Africa. The Consortium has designed a series of workshops connecting early career scholars from African institutions.  The first was in Addis Ababa in January 2019, whose theme was ‘Africa as Method’. Professor Guyer closed by emphasising the importance of not simply closing the gap between universities and the world of affairs, but the need  to cross, engage, explore and witness this gap. “This cannot be the work of a single individual or discipline or way of knowing” she explained, “but calls for the on-going project of many methods, histories, perspectives, genre and acts.” Next, was a keynote address from Professor Gregg Mitman (University of Wisconsin – Madison) titled “Parasites of Capital: Land, Labour and Disease in the Making of the Firestone Plantations”. The talk focused on the natural resource exploitation and extraction in the West and Central African region by virus hunters, disease ecologists and multinational companies, and how the impact of the extraction, the mines established and the public health interventions made have longstanding consequences for the livelihoods and well-being of the human and non-human inhabitants. He challenged making visible the forgotten history of parasites of capital and the environmental, cultural alterations they wrought.

A second keynote was delivered on Wednesday 29 May 2019 by Centre for the Advancement of Scholarship visiting fellow, Professor Emil Roduner (University of Pretoria and University of Stuttgart), titled “Carbon Dioxide, Climate Change and an Energy Transition for a Future Africa”. The presentation focused on how the increasing crisis of climate changes has created a call for an energy transition globally, meaning a move away from a carbon emission economy and replacing fossil fuels with renewable energy sources. In Africa, more than 80% of the population is not connected to the electricity grid, so these interventions could mean improved living standards in off-grid locations. Overall, investing in these technologies in Africa would mean global connection while preserving local culture, language and religion, and reduce the prevalence of environmental migration.  One of the key questions Professor Roduner raised was, “what do we do with carbon dioxide? In response to this question, Professor Roduner together with his team of chemists is working on a research project to produce fuel form carbon dioxide.  The total carbon dioxide emissions in South Africa alone is said to be over 452 million tonnes, major contributors being Eskom, and Sasol.

In addition to the two keynote addresses, the colloquium held three thematic sessions, consisting of six panels, from a combination of established and early career scholars in the environmental humanities. The first session focused on the “Political Economies of Extraction”, with presentations from Ayodeji Adegbite (University of Wisconsin – Madison) exploring the history and legacy of violent capitalist forms of natural resource development, specifically in relation to the Huilerie du Congo (HCB), their plantations and the disturbance to the political economy of Congo; Specioza Twinamasiko (Mbarara University of Science and Technology) on the gender dimension in environmental humanities and the disruptive effects of oil discovery on the communities in Uganda; Serah Kasembeli on the condition of modern day slavery in Africa and Asia, and how it is linked to the political economies of natural resources and their extraction; Rory du Plessis (University of Pretoria) on the history of the mining industry in South Africa and its impact on mental health of miners; and Manka Tabuwe on the media coverage of mining and associated activities, and the divide between the public and information on the extracted resource values and the environmental impact of the mining activities.

The second session on “Environmentalism, Religion and Culture” took place on 29 May 2019, and looked at indigenous knowledge system and how they engage with the environment. It included presentations from Douglas Kaze (University of Jos) on how African writers have engaged European ecological misconceptions, and imaginative reimagined African environments and indigenous ecological knowledge; and Pauline Kazemebe, who presented on the recent cyclone Idai and the religious responses to this event and climate change in general. In the second session Endalkachew Galuma (Arba Minch University) spoke on the Aair of Southern Ethiopia and how their values and fold ideals about nature are ecocentric, and has resulted in biodiversity conservation rooted in indigenous environmental beliefs and practices that are threatened by the spread of Christianity in the region; and Adewale Owoseni (University of Ibadan) presented on the worldview and practise of the Yoruba in the context of the Human and nonhuman Animal Relations. The final session was held on 30 May 2019, and looked at “Extraction, Environmental Justice and Law”, exploring political, developmental and legal responses to extraction and its impact on the environment. Tobais Ochieng (University of Nairobi) looked at the impact a planned standard gauge railway through Kenya will have on the already ecologically fragile and important ecosystems of the country, and highlighted the importance of ecologically sensitive infrastructure design and implementation, while George Odera-Outa (University of Nairobi) discussed ‘creative legal solutions’ in response to forest and environmental degradation, especially those found in the humanities and literature. In the second panel, Richard Chelin (Institute for Security Studies) presented on the phenomenon of illegal mining in South Africa, and the policy response to the environmental criminality that is taking place; while Catarina Gomes discussed environmental justice in postcolonial Angola, looking specifically at environmental policies reminiscent of colonial rule that are being implemented and producing negative consequences for indigenous communities, such as the San in Southern Africa.

The colloquium also hosted the screening of two documentaries looking at the intersection of the social and the environment – The Land Beneath Our Feet, which addressed large-scale land grabs in Liberia and the impact this has on livelihoods, and Uppland, which looks at the intersection of colonialism, environmental destruction and negative consequences of industrialisation.

The overall themes of the colloquium emphasised the need for African perspectives in the broad debate of the environmental humanities, especially concerning the link between extraction on the African continent and the historical legacy of colonialism. The discussion on topics like land, indigenous studies, development, and spirituality revealed the unique conations these concepts have to the African continent in light of the legacy of colonialism, and how deeply they are entrenched in the environmental humanities in relation to the African Anthropocene.

Photos from the opening day of the event can be found here. 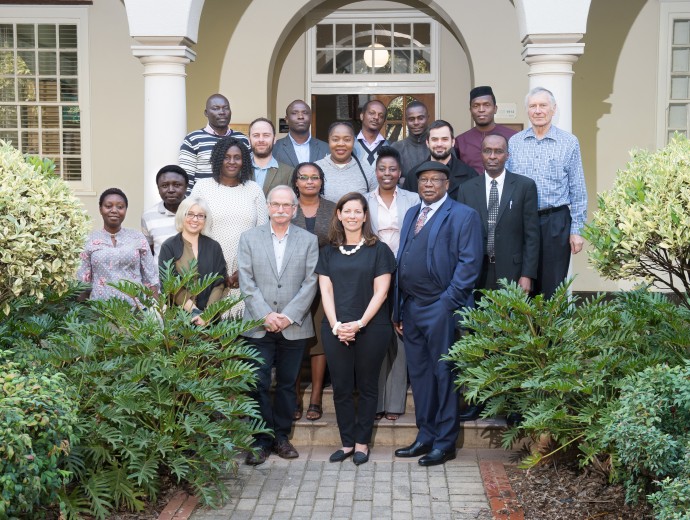