Honeybees and ants are eusocial insects. In the colonies, individuals cooperate and share tasks to increase productivity. Our aim is to understand the mechanisms that are at the basis of the division of labour in these societies, how they are organised, what are the mechanisms of coordination and task allocation and by which means nestmates communicate with each other.

CHEMICAL ECOLOGY
In eusocial species, reproduction is partitioned and only the queens reproduce. Workers remain sterile and take over all the tasks necessary to maintain the nest and rear the queen's offspring. Like in most other hymenoptera, workers lost the ability to mate, but possess functional ovaries and can produce haploid eggs that develop into males in absence of the queen. Our aim is to understand how reproduction is regulated within colonies of the honeybees. One of the model system we use for this is the parasitic honeybee originating in the race Apis mellifera capensis. The parasites usurp their host A.m. scutellata by gaining reproductive dominance. We try to determine why and how these parasitic workers can start reproducing in the presence of a host queen. This project involves the analysis of various exocrine gland products by gas chromatography. Our knowledge of the pheromonal mechanisms of regulation of reproduction has progressed through the use of simple bioassays designed to study pheromonal competition in honeybees. We also think we unraveled a mechanism based on pheromonal dominance for the evolution of the parasitic clonal lineage. DISEASES and PARASITES
One of the parasites we study is a honeybee originating in the race Apis mellifera capensis. These parasites usurp their host A.m. scutellata's colonies by gaining reproductive dominance. After parasites successfully entered a host colony, they produce female offspring by thelytokous parthenogenesis. In turn this offspring develops as reproductives and produces more parasites. The host queen disappears after variable time lags. With the decrease of host work force due to queen loss and the increase in number of the self-replicating parasites, the colony is doomed. Indeed, parasites invest most of their energy into reproduction instead of work. We studied the infestation dynamics of the parasite at local scale using an automated video system and at a global scale by studying the effect of beekeeping management on the parasite's spread. We suggested improved beekeeping techniques to reduce the impact of this parasite on the South African beekeeping industry. 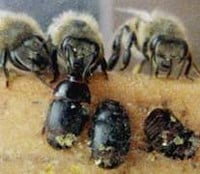 Our studies also involve other parasites like the Varroa mites as well as the viruses it transmit within the hive. We also have the capacity to study bacterial diseases like the American and European foulbrood.

POPULATION GENETICS AND HONEYBEE CONSERVATION
We are involved in population genetics project aimed at determining honeybee population density and dynamics in various parts of South Africa and Europe. The knowledge of how many honeybee colonies are supported by undisturbed biotopes in South Africa is necessary to estimate the effect of present or future bee diseases on wild and domesticated stocks and this work therefore contributes to pollinator conservation.

PLANT / HONEYBEE INTERACTIONS
Honeybees use the nectar and pollen produced by plants as food. Plants vary in the quality and quantity of nectar and pollen they produce and therefore in their nutritional value for honeybees. We investigate the effect of macronutrients, minerals and vitamins on the survival, behaviour and ovarian development of honeybee workers to understand pant / honeybee coevolution.

BEHAVIOUR
We are interested in how social insects cope with their environment. For example we determine the behaviour of honeybees when exposed to variations of temperature or humidity in their hive. Through social organisation, bees have the possibility to regulate the biophysical properties of their nest. Temperature is an important factor for good brood development and its regulation has been studied extensively. Humidity also seems to be important for brood development, but the variations in this parameter have not been measured often and it was claimed that it is not regulated. Our measurements show that the variations in humidity are not simply following variations in temperature and suggest that bees actively regulate this parameter.

In eusocial species, division of labour encompasses reproduction, which became restricted to one or a few individuals, whereas other colony members help rearing the offspring produced. To explain how absence of reproduction could be favoured by natural selection, Darwin suggested that the occurrence of sterile individuals must benefit to the whole colony. A more formal explanation was given by Hamilton with his inclusive fitness (or kin selection) theory: some individuals can overcome the cost of forgoing direct reproduction and helping by rearing the offspring of other individuals that are sufficiently related to them. Helpers thus gain indirect instead of direct fitness. However, it was shown that relatedness asymmetries can generate reproductive conflicts within societies that could contribute to break them apart. We are also interested in how these reproductive conflicts are resolved within colonies of ants and honeybees.

PHYSIOLOGICAL BASIS OF DETOXIFICATION IN HONEYBEES

Globally honeybee populations are faced with many challenges among which involves the use of harmful pesticides. These pesticides are said to have detrimental non-targets effects on insects especially pollinators. Some of the work we do include, looking at how honeybee workers cope when they ingest both lethal and non-lethal doses of pesticides. Using advanced techniques like metabolomics, we described the detoxification mechanisms in honeybee workers exposed to nicotene as well as suggested the possible pathways on how these bees get rid of the toxic from their bodies.

MODELING
We use modeling to help us understand the decision rules, task allocation and organisation of social insects. Working closely with colleagues from the Mathematics and Applied mathematics, we are investigating the use of mathematical models to describe and explain the mechanism of pheromone dispersal within the hive and colony population dynamics in the presence or absence of a social parasite.

HORMONAL BASIS of REPRODUCTION IN ANTS
A cooperation project with Dr Christian Peeters (Jussieu University, Paris, France) and Dr Colin Brent (North Carolina University, Raleigh, USA) concerned the titration of Juvenile Hormone in relation to reproductive status. This topic has been extensively covered in other social insects (e.g. honeybees and bumblebees), but never in ants due to technical limitations. The diversity of reproductive systems found in ants opens a fascinating field of research in reproductive physiology. The ant in the picture is famous, it featured in the documentary Of the National Geographic entitled 'Insect Wars'.