SPMA student spreads hope in the midst of pandemic

The societal impact of the lockdown necessitated by the global COVID-19 pandemic has inspired Whade Williams, a School for Public Management and Administration (SPMA) student, to make a difference in his community. Together with friends and family, he has worked tirelessly to assist those in need throughout the North West province.
“Giving back to the community has always been something which I've held near to my heart. The COVID-19 pandemic got me thinking  a lot. Taking into account that people were losing their jobs, and children who usually got meals at schools won't be getting any, I knew that I had to try and ease a few families’ lives,” says Whade.
This, he says, inspired them to provide grocery packages that include essential items such as toiletries, non-perishable foods as well as fresh vegetables to over 1 500 households. These were distributed to the unemployed, foreign nationals, the elderly and child-headed households in various villages and townships in the area, during the first few weeks of lockdown.
The current grocery and food drive initiative builds on the work he is already doing through his non-profit organisation Starting Of A Dream Foundation, which he registered in 2016 as a means to develop young people and the communities around South Africa. “We are currently based in the Western Cape and in the North West. I had initially started the grocery parcels with my family and later joined forces with other friends and family who have their own organisations to increase the impact and to reach more people,” he explains.
Whade is a second-year student and says: “One of the reasons why I'm studying BAdmin International Relations and Public Administration is so that I can bring change into our communities, fixing the municipalities and changing the lives of individuals by correcting the system.” He adds that once he graduates, he would like to expand his organisation’s philanthropic efforts and establish it as a household name bringing change on the South African social development scene.
His work was recognised by Bizcommunity, who named him as one of South Africa’s 'Top eight youth wonders under 30' in 2019. “With the skill set and the broad range of knowledge I've gained through my degree, I see myself in the near future being able to fit into any career in the public or private sector, but with the end goal of developing my company and expanding into the rest of Africa.”
He concludes: “This was not a once-off initiative, I've been inspired to start a food-drive division in my organisation. I am in the process of solidifying that idea and having it implemented by next year. That will include working with other individuals, institutions or organisations.” Whade Williams on day one of food distribution 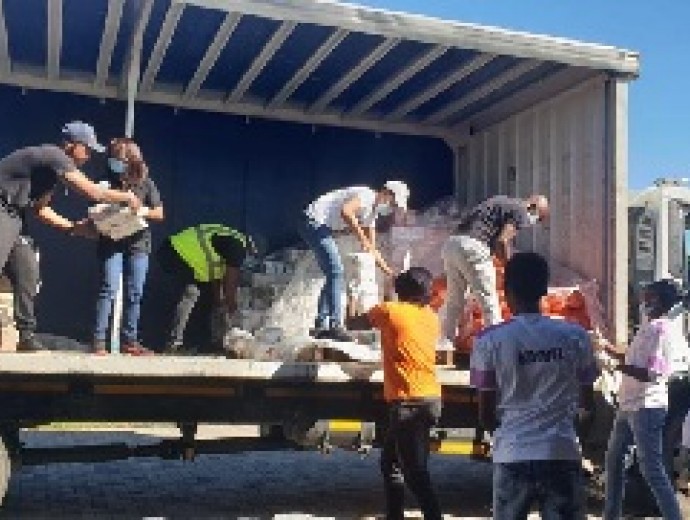