The 18-year old Bernard van der Linde (Tuks) relishes the challenge of trying to outwit the opposition's defence during a rugby game as for him it is always about scoring tries the more, the better.

His on-field heroics have not gone unnoticed. Last year he was tipped as one of the players to watch out for on the Schoolboy rugby-website. Van der Linde did not disappoint. He got selected to represent the Blue Bulls High School Craven Week-team.

More importantly, the Tuks Young Guns scrumhalf got offered a contract to play for the Bulls under-21 side this season. He is also going to represent the South African Sevens Student team at the World University Games (3-14 July) in Napoli, Italy.

In spite of being somewhat of a novice when it comes to playing the shorter format of the game, Van der Linde can't wait to take to the field. According to him the only time he truly got to play sevens rugby was earlier this year when he represented Tuks at two tournaments. Somehow he did enough to impress the selectors.

"I think sevens rugby could be my forte as there is so much more opportunity to run with the ball and set up attacks. It is always exciting to score a try, but I never play merely to impress spectators.  For me, it will always be what is best for the team.

"I get a real rush when I can sidestep an opponent opening a gap in the defence and then sent a teammate away to score," explains the Tuks player who is by far the youngest player in the South African Student Team.

Getting selected to play for the BlitzBoks during next year's Tokyo Olympics is a definite goal.

"I know the odds are against me doing so, but that is not going to prevent me from trying. Who knows, if I perform well enough in Italy, I might get invited to train with the National Academy-side. It will be a step in the right direction."

Van der Linde considers Francois Hougaard to be a role model and not merely for his feats on the field.

"Hougaard has got a balanced approach to life. As a player, he has got that X-factor that enables to change the outcome of any game at any moment. He seemingly also realises that any sports career can only last so long, and therefore, he has invested his earnings wisely. As young players, we should take note of things like that."

The Tuks Young Guns and Sevens coach, Dabeon Draghoender, has no hesitation in describing Van der Linde as an exciting prospect.  Not surprisingly he compares Van der Linde to Hougaard.

"Bernard is the same type of player as Hougaard, but I consider him to be more fleetfooted. The biggest asset he brings to any team is the way he can create space. He is also an astute tactician. Sometimes he also reminds me of the way Cheslin Kolbe plays."

Stephan Smit is the other Tuks player in the South African Students Sevens team. 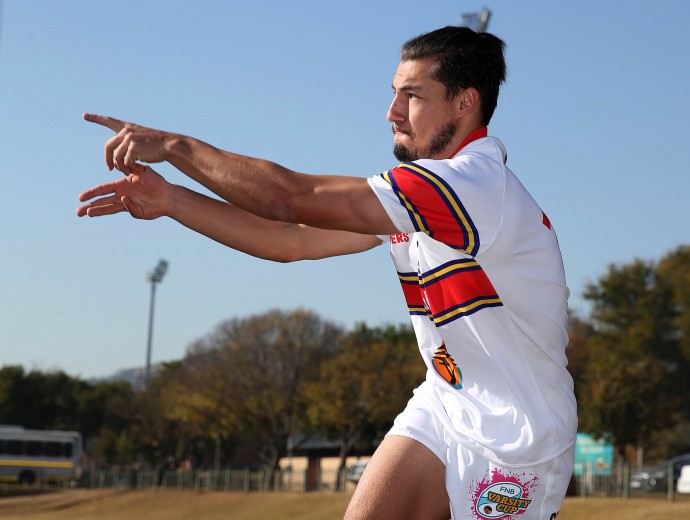