TuksLaw celebrates its ranking as Best in Africa

On 5 December 2017 the Faculty of Law, its alumni, foreign dignitaries, friends, members of the judiciary, staff and students celebrated the faculty's 2018 ranking by Times Higher Education World University Rankings (THE) as the best in Africa and 92nd in the world.

After the Programme Director, Prof Monray Botha (Head of the Department of Mercantile Law) had welcomed the guests, the Vice-Chancellor and Principal of the University of Pretoria, Prof Cheryl de la Rey, presented the opening address. Prof De la Rey stated with pride that UP should remain a leading research-intensive university in Africa, recognised internationally for its quality, relevance and impact, and also for developing people, creating knowledge and making a difference locally and globally.

She put the 2018 Times Higher Education (THE) World University Rankings in perspective. She explained that the THE ranking takes into account research and reputation, and that the ranking scores are derived from teaching, research, citations, industry income and international outlook. She congratulated all who had contributed to the success of the Faculty of Law over many years.

A very proud Dean André Boraine followed with his address and touched  on a number of other aspects, such as how the faculty has evolved over the past decades, its former academic staff and deans, its research outputs, the calibre of staff, the centres for Child Law and Human Rights and their international contributions. He also acknowledged the global impact of staff and students, in particular those students who represent TuksLaw on international moot platforms. He highlighted the roles of the five research chairs in the faculty: prof Corlia van Heerden who holds the ABSA/Barclays Research Chair in Banking Law in Africa; honorary professor Chris Job as the de facto Adams and Adams Research Chair in Intellectual Property Law; Prof Ann Skelton as the UNESCO Research Chair in Education Law; Prof Danny Bradlow as the SARChI Chair in International Economic Relations; and Prof Erika de Wet as the SARChI Chair in Comparative Constitutional Law in Africa. He also mentioned the recent unconditional accreditation of TuksLaw's LLB degree by the Council on Higher Education (CHE) – one of only three law faculties that received unconditional accreditation. He thanked Deputy Dean Anton Kok and members of the Teaching and Learning Committee for the vital role they had played in the accreditation process. Prof Boraine concluded by saying he was 'proud to be part of this faculty and … honours what has been built and achieved over many decades by current and former staff and students.'

Former Dean, Prof Christof Heyns (2007 to 2010), who is the current director of the Institute for International and Comparative Law in Africa (ICLA) and a member of the United Nations (UN) Human Rights Committee, presented an excerpt from a longer paper on his thoughts on the faculty's ranking and said inter alia: 'There are thousands of law faculties in the world. To be recognised as one of the top hundred in the world is something extraordinary, and I would like to congratulate and thank all of you who were part of the team that made this happen.'

In his view, a faculty should be built on excellence and decency. 'Excellence without decency has no soul; decency without excellence lacks strength.' He stated that he was 'very, very happy not to have chased greatness elsewhere, but to have been able to work with others to turn TuksLaw into a place of consequence.'

Prof Heyns mentioned by name some of the individuals from his era, especially the early years, who had had a huge impact on his academic career and decisions. He recognised that 'a new generation has taken over the torch, and is running with it and is running the show. I am not even going to try to mention you by name, but you are the people who inspire our students, who inspire us as your colleagues, and who are carrying our name forward. I congratulate the lecturers, students, and the administrative staff of the faculty, who earned us this great distinction.'

Former Dean Duard Kleyn (1998 to 2006), who retired earlier this year as professor in the Department of Jurisprudence, said that he was honoured to attend the event as former dean and guest, and conveyed his congratulations to all those who worked together over many years to put the faculty on the 'world map'.

Prof Trynie Boezaart, former Head of the Department of Private Law, said that what bears testimony to the work done in the faculty is the difference it has made in the lives of its students and in the communities it serves. 'It is the values that we instil in our students that ultimately uphold the integrity of the legal profession and respect for the judicial system. The law is the tool with which to achieve justice for all who live in this country.' She added: 'Now is the time to reflect on our contribution to burning issues such as access to basic education, land reform, the exclusion of children with disabilities, and social cohesion, to mention just a few. We should closely scrutinise the impact of our individual and collective efforts to evaluate the progress towards the goal of a united South Africa with improved quality of life [that would] free the potential of all. What has been achieved should inspire us to do even more.' (Click here for full address.)

Prof Dire Tladi concluded the formal part of proceedings by stating that irrespective of TuksLaw's position on the various rankings, the faculty should continue to identify areas where it may still be lacking and strive continually to improve.

At the conclusion of the formalities, young and old enjoyed food and each other's company in the Aula foyer while a jazz band provided background music.

'In Africa, rain means life. People from Africa celebrate rain. It means crops, food and prosperity. It brings life. In their traditional greeting, the Sotho people have long used the words "Khotso Pula Nala" – Peace, Rain, and Abundance. They pronounce the word RAIN as a blessing.'  A joyous crowd arrived on the Hatfield Campus on a rainy evening on 5 December 2017 to celebrate the Faculty's THE ranking. –  Editor 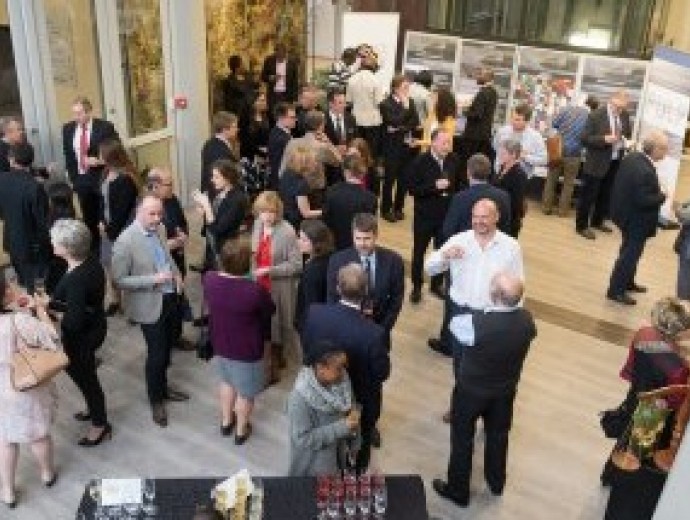