Bright student has a planet named after him

How many people can say they have had a planet has been named after them and that they have published internationally, all before reaching the age of 21?

Bernard Smit, a final-year microbiology student at the University of Pretoria (UP), recently published an article in the international journal Letters in Applied Microbiology, on a novel method to generate electricity using an interesting type of bacteria.*

‘I have been interested in science since a young age and am very curious about how things work. I want to know how science is evolving to improve our understanding of the things around us – and I love robotics,’ Bernard explained. ‘Science is exciting as it is the creation of new knowledge. The innovative application of this knowledge to solve world-wide problems keeps my clock ticking.’

The process of generating electricity using bacteria was discovered many years ago. Bernard started playing with this idea in Grade 9, and in Grade 10 he entered a project in a science expo at Hoërskool Waterkloof. In Grade 11 he tested his hypothesis, enlisting the help of UP researchers Prof Fanus Venter, Prof Johan Joubert, Dr Elritha van Zyl (all from the Department of Microbiology) and Prof Walter Meyer (from the Department of Physics). This work earned him a gold medal at the Eskom Expo for Young Scientists International Science Fair, where he was also a category winner.

In 2015, when he was in matric, he had the opportunity to perform electron microscopy at UP and participated in the Intel International Science and Engineering Fair (Intel ISEF) in Pittsburgh, USA, where he received a silver medal and special prizes from the American Society for Microbiology and the Chinese Department of Science and Technology. Among these was the honour of having a minor planet named after him.

That same year Bernard was invited to shadow Dr Christopher Lefèvre during his visit to the University of the Western Cape. Dr Lefèvre then invited Bernard to perform further testing at the Alternative Energies and Atomic Energy Commission (CEA) in Aix-en-Provence, France. During his first year at UP, Bernard finished his experiments and received the Derek Gray Memorial Award, which afforded him the opportunity to present his research at the Stockholm International Youth Science Seminar (SIYSS). The SIYSS took place during Nobel Week, and the 25 participants from around the world attended activities such as the Nobel Lecture Presentations, the Nobel Prize Award Ceremony and the Nobel Banquet. After one more year of writing up, his article was accepted and published.

Bernard is grateful to all the people that have crossed his path and feels everyone has made a valuable contribution, especially those who were willing to make suggestions and answer questions. ‘I feel extremely privileged and proud to be an undergraduate student at UP,’ he concluded.

In addition to his academic activities, Bernard also played trombone for the UP Symphony Orchestra and Wind Band and enjoys hiking.

*The bacteria used in the experiments, called Magnetotactic Bacteria, are extraordinary as they possess very small magnets (called magnetosomes) which they use to obtain optimal growth conditions in water by using Earth’s magnetic field. Bernard has allowed these bacteria to move through coils, using Faraday’s law of electromagnetic induction to generate electricity. This could be a potential alternative energy source or it might have an interesting microvoltage application. 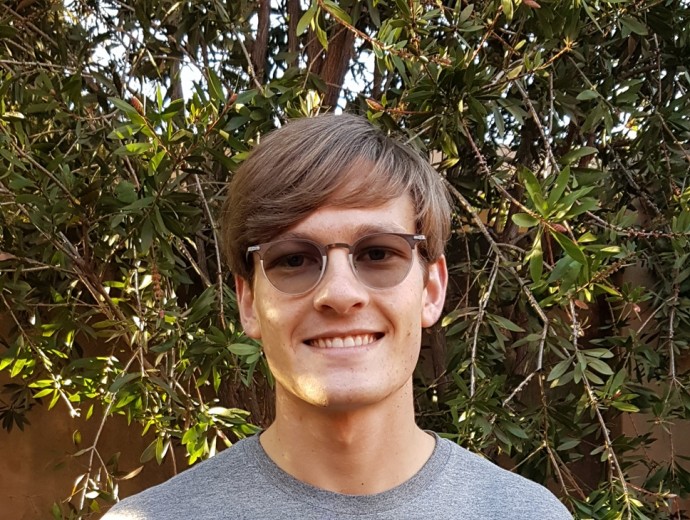