Scientists study microbes in the desert for clues on climate change

It is one of the most inhospitable places on Earth. On the gravel plains of the Namib desert, very low rainfall and the sun’s unrelenting radiation make it impossible for most life to survive. 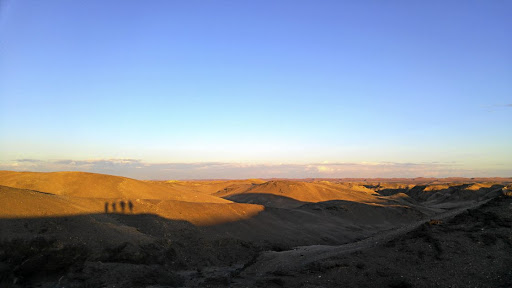 At 10am, the thermometer is already in the low 30s and climbing as researchers from the University of Pretoria set up their experiment. A heat haze steadily widens above the panoramic horizon.

Any life that does exist in the Namib desert hinges on the availability of water and the fog that characterises the ecosystem. This makes it an ideal laboratory for scientists trying to understand how the smallest life — microbes — respond to water in their ecosystems.

This is particularly important for southern Africa, where climate change is expected to wreak havoc with water availability. The UN’s Intergovernmental Panel on Climate Change warns that the continent is likely to be the most vulnerable to climate change.

"The prediction of climate change is that water events will intensify [release more water] but rarify in frequency," says Jean-Baptiste Ramond, a research fellow at the University of Pretoria’s Centre for Microbial Ecology and Genomics.

"There is less water, but when it happens

He and postgraduate students from the centre are marking out two large squares of 3.5m by 3.5m that they will break up into a grid. The students will painstakingly water the grid in one square with rigorously strained and purified water. They will compare what happens to the microbes in the soil when they receive water with those in the other square, which will not

Researchers are increasingly recognising the importance of soil microbiomes in terrestrial ecology, and their wide-ranging consequences for ecosystem health and agricultural productivity. But climate change is expected to affect these microbial communities.

This experiment monitors the microbial communities’ respiration — their conversion by organic matter of oxygen into carbon dioxide. 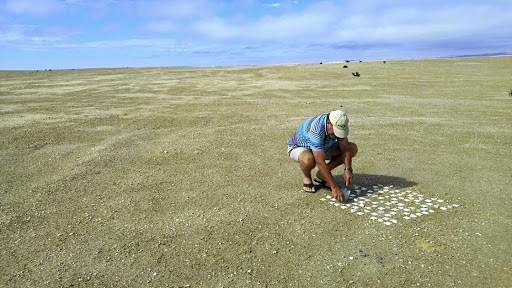 "Deserts store about a third of the ‘terrestrial’ carbon in the world and represent one-fifth of the Earth’s total land surface area," says Ramond.

A researcher sets up arrays of small tiles across the Namib to understand the growth and evolution of bacterial communities.

"If there is more water in the system, there is more photosynthesis [the process by which plants turn sunlight into chemical energy] and more respiration. That means there’s a greater release of carbon."

Carlos Leon-Sobrino, a postdoctoral researcher at the centre and lead researcher on the experiment, keeps glancing at a cloud bank forming in the east — an extreme or exceptional weather event would destroy his experiment.

If it does rain, he will have to pack it all in and begin his experiment again in 2018.

This is one of the many experiments under way during the centre’s annual trip to the Gobabeb Research Centre in Namibia. Gobabeb, about 120km from Walvis Bay, is in a unique location. It is the meeting place of the dune seas in the south, the hyperarid plains in the north and the ephemeral Kuiseb River, whose dry river bed separates the two.

Gobabeb, formerly home to a Topnaar community called the !Nomabeb, was established in 1962 and attracts biological, geological and environmental researchers from all over the world to study its singular ecosystems. The red sand that forms the dune sea, which has been recognised as a world heritage site, comes from the mountains of Lesotho. The sand travels more than 2,000km down the Orange River into the sea, and is pulled north by the Benguela Current before being blown inland into Namibia.

Aside from its remarkable ecology, the Namib desert has another drawcard: its inhospitable environment could help in the search for life on other planets. "The fact that the soil is dry for 51 weeks of the year and temperatures at the surface [of the soil] of up to 60°C-65°C doesn’t prevent microbial life from occurring here, and I’d like to know what’s there, what it’s doing and how it has adapted to survive," says centre director Don Cowan.

Hypolithons, communities of blue-green bacteria known as cyanobacteria, live on the underside of translucent quartz rocks. The gravel plains are littered with quartz rocks, under many of which is the telltale green film.

"They are protected from the high radiation but they also have light coming through [because the quartz lets light through]," says Ramond.

"They are able to photosynthesise, and you have this mini-ecosystem that is like an oasis in the middle of nowhere."

Organisms such as these, known as extremophiles, live at the outer edges of what is believed to be possible.

Chris McKay, a senior scientist at Nasa’s Ames Exploration Centre in California, says: "We’re interested in extremophiles because of their implications for astrobiology.

"For life, there must be an organism at the base of the food chain, a primary producer. In the deserts, we focused on photosynthesis and the ability [of organisms] to produce biomass in the desert, not importing it, but producing it locally."

Cowan, who studies extremophiles in the Namib and in Antarctica’s dry valleys, has set up an experiment to understand the growth and evolution of hypolithic communities. He is trying to determine how fast they grow and how these communities might evolve under the extreme desert conditions.

This experiment, which is in its third year, involved setting up three arrays of small tiles — about 5cm by 5cm each — made of different materials and seeing whether they become colonised. Each of the arrays is in a different Namib rainfall region.

"This was always going to be a long-term experiment. I’ve designed it to last for nine years," Cowan says.

Experiments like this one will help in the search for life on other planets, such as Mars. There’s an envelope in which life can occur, he says.

"Extremophiles give us information on the limits of that envelope and give us some guidance of where we should look for life and where we shouldn’t," Cowan says.

"For example, a planet with a surface temperature of plus-1,500°C is, in terms of our known biology, not a good place to look for biological life."

Researchers searching for extraterrestrial life are looking to these simple life forms for a hint of what to expect elsewhere — and the life that could be living under rocks to hide from extreme environments.