Desert Microbiology conducted in the Namibia Desert by the CMEG team

Every April for the past 9 years, researchers from the Centre for Microbial Ecology and Genomics at the University of Pretoria have spent a week at the Gobabeb Research and Training Centre (GRTC), expanding their research on the microbial ecology of Namib Desert soil ecosystems.  The CMEG team, led by Professor Don Cowan and Research Fellow Dr Jean-Baptiste Ramond, have used their extensive research skills in metagenomics, microbial phylogenetics and ecogenomics to investigate a wide range of different structural, functional, and adaptive questions all focusing on the microbiology of Namib Desert soils.

In April 2016, the CMEG project team included 12 researchers from the University of Pretoria, who were joined by a number of international collaborators, each with complementary interests in some aspect of desert microbial ecology.

The CMEG research team objectives were all extensions of on-going research, mostly in collaboration with ex-GRTC Director Mary Seely and current Director Gillian Maggs-Kölling: These included continuing studies of the possible role of phytopathogenic bacteria or fungi in the etiology of gravel desert and dune fairy circles [1,2]; recovering a year’s microenvironmental data from ibuttons placed in April 2015 along the 200km longitudinal soil transect (following the C14 road, with 10km sampling intervals); expanding the collection of Collembola (springtails) across the desert; re-sampling artificial hypolith arrays which are designed to give an 8-year record of both the mechanism and kinetics of hypolithic community development; and collecting soil samples four times a day from a carefully designed 10m2 quadrat – an experiment which will use advanced metatranscriptomics to investigate changes in diurnal gene expression profiles [3].

For the international visitors, research objectives were both diverse and innovative. Professors Steve Pointing and Len Goodman from Auckland University of Technology, together with flight leader Dr Barbara Breen, and pilot Ashray Doshi, were ‘the drone team’. Using low altitude quadcopters equipped with a range of high resolution cameras and spectral imaging facilities, the drone team extended previous studies on the distribution (and role) of desert hypolithic microbiology and the thermal capacities of dune fairy circles. Flying carefully plotted parallel paths of several hundred meters, at an altitude of around 40m, the drone survey team were able to generate photographic survey data at sub-centimetre resolution which is being used to generate accurate hypolith coverage estimates.  These coverage values will be combined with total biomass values and dinitrogen-fixation rate data to provide an estimate (for the first time) of the regional input of nitrogen from hot desert hypoliths. An aerial survey of Welwitschia wash provides a valuable baseline dataset for long term monitoring of the distribution, growth rates and survival of the enigmatic Welwitschias.

Professor Daniele Daffonchio and postdocs Drs Ramona Marasco and Marco Fusi from the King Abdullah University of Science and Technology, Saudi Arabia, are interested in root-sheath (rhizosheath) microbiomics [4]. Rhizosheaths are a structural adaptation of many desert plants, designed to contribute to water retention and root protection, and the Stipagrostis (spear-grass) plants of the dune margins have exceptionally well developed root sheaths. However, little is known about the triggers which cause rhizosheaths to form, nor of the detailed functional roles that they play in contributing to plant growth and survival.Long-term collaborator with Daniele, Professor Ameur Cherif and his PhD researcher Mouna Elmahjoubi also participated in the field expedition. Ameur’s research interests are primarily in the field of plant-microbe interactions, and he has worked with Daniele for some years on the phytobiomics of Sahara Desert plants. In 2015, he and Prof Cowan received a research grant, under the RSA-Tunisia Bilateral research program, to investigate aspects of Tunisian desert soil microbial ecology. His visit to the Namib formed part of the research exchange and training component of that program.

Professor Ian Hogg and PhD research Gemma Collins from the University of Waikato, New Zealand, represented ‘the microinvertebrate team’. A preliminary survey of springtail (Collembola) species diversity in the Namib Desert, based on CO-1 (cytochrome oxidase) gene bar-coding of individuals collected in April 2015, suggested that the species diversity was much higher than published phenotypic surveys had previously reported. With help from MSc student Janine Baxter, the microinvertebrate team collected several hundred specimens from across the coast-mountain transect, each specimen painstakingly transferred from the flotation vessel into a microtitre plate well for subsequent bar-coding. Interestingly, the CO-1 phylogenetic data, now in the CMEG laboratory and being processed by Janine, suggests that there is a high level of speciation.  What is particularly exciting is the observation that individual species show a very high level of geographic separation.

Professor David Hopkins, Royal Agricultural University, UK, is a long-term collaborator with Prof Cowan and has contributed to a number of previous studies on the responses of Namib Desert soil microbial communities to macroenvironmental change [5]. David is also an international representative on the CMEG Advisory Board and a founder member (with Don Cowan) of the African-Arabian Desert Microbial Ecology Network.

Dr Asun de los Rios, from CSIC in Madrid, Spain, is an expert electron microscopist. She and Prof Cowan have previously published a study on the distribution of different microbial cells on the ventral surfaces of Antarctic quartz rocks (hypoliths [6]), and her work in the Namib Desert aims to probe the structural basis of hot desert hypolithic and cryptolithic communities.

New CMEG collaborator, Dr Weidong Kong from ITPCAS, China, studies the productivity and nutrient turnover capacity of desert soil crusts. Soil crusts are vitally important to the stability of desert soils and ecosystems, but are generally not found in the most extreme hyper-arid regions of hot deserts.  Surveys across the Namib coast-mountain transect identified extensive soil crusts in the coastal fog zone (the famous lichen fields), and more localised and cryptic soil crusts at the transition of the fog and central hyper-arid zones.

Come April 2017, the CMEG team and collaborators will be back at Gobabeb to continue their field research.  Year-2 samples must be recovered from the artificial hypolith arrays, and a new array, with simulated rain input, will be established. The surveys of Collembola species distribution will be spatially extended, and expanded to other invertebrate taxa.  More soil samples will be recovered from the C14 trans-desert sites, to be used for stable isotope analysis (as a method for estimating the pathways of nitrogen turnover), for further analysis of the soil metavirome [7] and to initiate a new phylogenetic analysis of xerophilic yeasts (non-filamentous fungi). The drone team will be back, with new spatial survey objectives. Dr Ramond will lead the ‘fairy circle’ team in the scale-up of their sampling campaign.  And, along with all their exciting scientific objectives, the [email protected] researchers will again enjoy the magnificence of the Namib desertscape, the hospitality of GRTC staff and researchers and the comfort of the GRTC facilities. 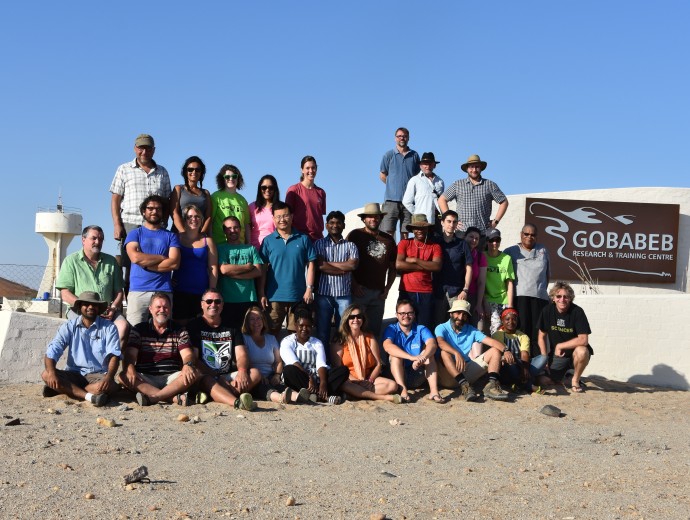